Disturbing evidence of animal abuse, racism, drug use and other illegal and inappropriate behavior at a North Carolina bear park has allegedly been uncovered by an investigation conducted by the People for the Ethical Treatment of Animals (PETA).

As Mother Nature Network reports, PETA is a known critic of Chief Saunooke Bear Park in Cherokee, N.C. Now the animal rights organization says it has ample evidence to prove that the park's staff, who have also been accused of other questionable behaviors, are guilty of mistreatment of the facility's bears. PETA says it's working with the government to try to shut the operation down. 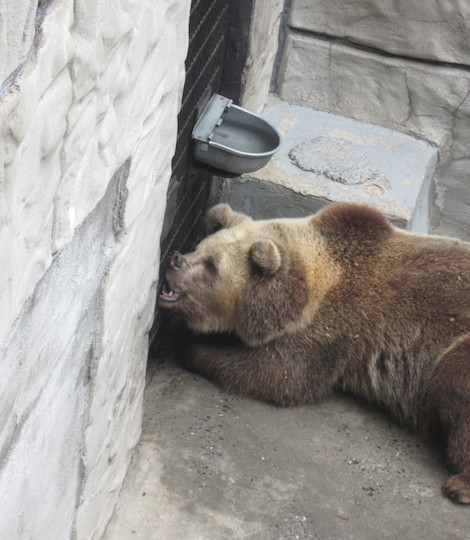 According to the park's bear keeper, the animals bite at the metal fencing installed in the pits and sometimes break their teeth. (Photo Credit: PETA)

"[There is also evidence of] an employee who called Native Americans 'long-distance corn n*****s' and the facility's manager, who admitted to a secret policy against hiring Native Americans," the release continued. "Add to that drug use by one employee, sexual harassment by another, and employees being paid cash under the table in violation of federal law, and you've got the picture at Chief Saunooke Bear Park."

According to PETA, the park's staff have deprived bears of food and proper veterinary care. The bears are allegedly kept confined in "small, barren concrete pits" and are described by PETA as displaying very "stressed" behavior and "signs of suffering."

An undercover video about the bear park, released by PETA and narrated by animal activist and former "The Price Is Right" host Bob Barker, appears to corroborate many of the press release's accusations. For instance, the clip shows confined bears gnawing on metal fences and pacing in tiny pits. Individuals identified in the video as members of the park's staff can be heard making racist remarks about Native Americans.

As Mother Nature Network notes, the bear park is located "within the reservation of the Eastern Band of the Cherokee Nation, the only federally recognized tribe in the state."

In September 2012, following multiple complaints lodged by PETA, the U.S. Department of Agriculture charged the bear park with 14 violations of the "federal Animal Welfare Act (AWA) for failing to provide the bears with adequate housing, food, and veterinary care, among other abuses."

"The USDA has confirmed that Chief Saunooke deprives the bears in its concrete pits of even their most basic needs, all the way down to proper food and shelter," said Delcianna Winders, PETA's Foundation Director of Captive Animal Law Enforcement, according to a press release published at the time. "This cruel outfit should be stripped of its license, and the bears should be allowed to be bears again."

PETA says it hopes to continue working with the USDA in shutting down the bear park and getting the animals to a sanctuary.

As National Geographic notes, it's not merely bears in captivity whose well-being has been threatened by humans. For example, due to habitat destruction and other human activity, grizzly bears are now found in only 2 percent of their former range, while sun bears are in danger of extinction.

"We estimate that sun bears have declined by at least 30 percent over the past 30 years and continue to decline at this rate," Rob Steinmetz, a bear expert with the World Conservation Union, told the AP in 2007.

For more information and how to help, go to PETA's website here.