Advocacy organizations elicit controversy by their very nature. They exist to push back against prevailing public thought and eradicate avenues of oppression. No mainstream advocacy organization has managed to hit a nerve in quite the same way as People for the Ethical Treatment of Animals (PETA). They represent the most prominent animal rights organization in the world. The goal: total animal liberation. This position contends that all sentient beings deserve our kindness and respect for their autonomy. 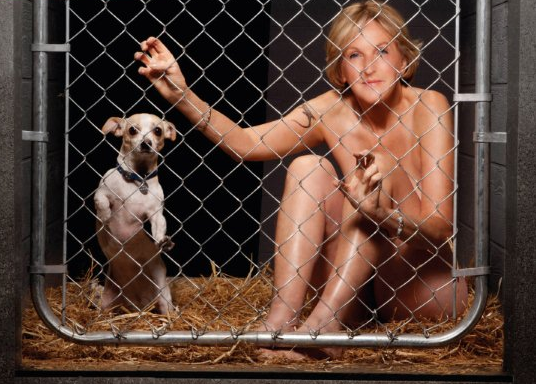 Ingrid Newkirk is the president and public face of PETA, in addition to being a co-founder. I had the privilege of speaking with the tireless activist after the Boston stop on her 'The Naked Truth' tour. Perhaps the most striking thing about Ingrid is her generosity and lack of pretension. Before taking a seat with me, she spoke to every single guest who wanted a moment with her, patiently listening to the their stories and encouraging them in their own advocacy.

After finishing up and getting directions to her dinner destination, we began our discussion. "Boston is a conundrum," Newkirk told me, explaining that she has a "fraught relationship with a GPS." But one thing wasn't going to be on her menu: animals. While advocating for the total abolition of animal use by humans, Ingrid understands the resistance to her message, "I think it's very easy: everybody resists change, no matter who they are. It's a very unusual person who immediately accepts a new idea. I think there are good reasons for that biologically, historically." Although that doesn't excuse thoughtlessness, "You have to actually think about things in order to change." PETA acts as the most prominent voice in forcing people to think while working for industrial and legal reform.

I asked about the process that goes into crafting PETA's intricate strategies. Newkirk explained, "We look at an incidence or pattern of cruelty and decide who the players are. And we have a corporate division that you will probably never hear about because these are people who are working behind the scenes with industries, with corporations, with everybody from banks to slaughterhouses to change behaviors." PETA's goal is a clear one, to make these cultural forces "kinder." But don't mistake a kind goal for weak implementation: "We have 19 lawyers on staff who are working constantly to find creative ways to use existing law to push the envelope for animal rights and expand animal protection."

While unable to specifically endorse political parties or candidates, Newkirk even expressed hope for the subject of animal rights in the political realm and used the New York mayoral election as a springboard for that discussion. "All the politicians wanted to talk about how much they cared about animals, even if they couldn't quite figure out what they should to be saying," she said with a wry enthusiasm. Then came her pointed words for one failed candidate, "They all had to have a positive position on animal protection because Christine Quinn, while she was strong on gay issues because she is gay, had a non-all encompassing view and was very biased against others who were discriminated against, specifically the carriage horses that are a disgrace in New York."

Most people recognize PETA more for their graphic public service ads and pointed campaigns than their legal and industrial advocacy. The organization knows you're squirming at the explicit nature of their advocacy but views it as a necessary component. Newkirk is unwavering:

She doesn't mind the push-back, "They can condemn us, that's fine. I don't mind. They can say, 'Oh, that PETA group. But they have a point with such and such,' then start their own conversation."

I ask about the sensitive subjects PETA uses as historical parallels. "I feel very sad that, for example with Holocaust on Your Plate (a controversial campaign), there are people who have made a particular kind of suffering their own. And they want to own it and make it only special to them, whereas suffering is suffering. Meanness is meanness," Newkirk states certainly. "One of the lessons that should come with being able to relate to suffering is the ability to relate to suffering of those who you don't immediately think of as a part of your family, clan, tribe, nation, or religion. It should be all-encompassing." This erasure of distinction is perhaps the largest hurdle PETA faces as it attempts to encourage empathy with the suffering of beings who aren't human.

Sometimes the response to PETA's campaigns from detractors is downright psychotic. "In the mail we'll get animal organs. We'll get dead animals thrown at the door. We'll get dying animals or a deer's head in the driveway," Newkirk counted off in a matter-of-fact tone that betrays the prevalence of such extreme harassment. "I will get death threats with pictures of me with the eyes crossed out. It's a curious reaction to a group that's simply saying, 'Could we just be kinder?'" She has personally been stalked by a man who was incarcerated. About that she offers, "It makes you know what it must be like to be hunted." 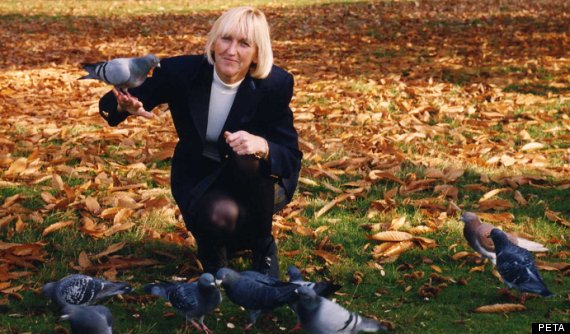 Ingrid Newkirk finds children are most receptive to the PETA message of empathy. Her compassionate and playful disposition resonates well with young audiences. She told me a story about a recent demo at which PETA was protested:

They paraded this child who was grossly overweight, poor thing. He was about nine years old or ten. They brought him dressed up in a 'People Eating Tasty Animals' shirt to sit there. And I went up and gave him a hug. He was being used by these people who looked basically as if they'd just fallen off a bar stool in a hunting lodge.

But the story doesn't end there, "I said: 'You know, if you want to rebel against your parents, you'll care about what happen to animals.' And he gave me the biggest smile."

"We put an enormous amount of time in giving kids the materials they like and having fun with them," Newkirk offers with the engaged and empathetic tone one recognizes among those who genuinely like kids. "They all come out to hug the elephant (a human mascot) when we go to do school demos and what have you." PETA's found an ally in Hollywood when it comes to kids, "There are creative writers in Hollywood who understand that kids care about animals and are working in animal rights messages more and more. It's grand!"

PETA also works with celebrities to champion the cause of animals rights. Tom Scholz, founder of the seminal rock band Boston and inventor of the Rockman amplifier, was on hand to chat with me. Ingrid was presenting him with an award for his work with animals. He's been a voice against animal suffering for decades. Before his advocacy, Scholz had simply never realized that animals were sentient, "When I discovered there was such a thing as animals' feelings, I immediately started looking for an avenue to help. PETA was one of the very few in the beginning trying to stand up for animal protection." He adds emphatically, "Thank god Ingrid Newkirk was offering me some avenue to offer help." In terms of celebrity endorsement, Scholz was one of the first. But he won't take too much credit. With a genial laugh, he tells me, "I gave it rock 'n' roll backing." Scholz doesn't mind directing a little of that rock attitude your way if you're on the fence about cutting animals from the plate: "Why wait? While you're deciding, you're causing a lot of unnecessary pain and suffering." He also talked about the improvements in food selection over recent decades, "It was harder thirty or forty years ago. Now it's a piece of cake. You can go into Whole Foods and buy practically anything in vegan form."

Newkirk shares that optimism, especially about the future of animal rights.Her initial response to my question about the immediate successes we should expect was cheeky: "My crystal ball doesn't work very well." But she cautiously makes some predictions: "I do think that chained elephants and tigers will be out of the circus within ten years." She also expresses confidence that the "meat analog" industry, including in vitro meat, will become a huge force in preventing animal slaughter. Newkirk expects that while humans will eventually drift away from meat, there's already a resistance forming, "Bill Gates realizes the future is not in meat. Ecologists realize the future is not in meat."

For all the controversy and press antics wrapped up in the PETA image, Ingrid Newkirk's words are simple and poignant: "All suffering that can be prevented should be prevented. All meanness that can be stopped should be stopped. That's what the lesson is: Try to relate to those on your plate. Try to relate to all those who come in a slightly different package than you, because they're all you."

For more information about People for the Ethical Treatment of Animals, visit peta.org.