Warning: Some of the following graphic photos may distress the reader.

People for the Ethical Treatment of Animals (PETA) is an organization that publicly claims to represent the best interest of animals -- indeed their "ethical treatment." Yet approximately 2,000 animals pass through PETA's front door every year and very few make it out alive. The vast majority -- 96 percent in 2011 -- exit the facility out the back door after they have been killed, when Pet Cremation Services of Tidewater stops by on their regular visits to pick up their remains. Between these visits, the bodies are stored in the giant walk-in freezer PETA installed for this very purpose. It is a freezer that cost $9,370 and, like the company which incinerates the bodies of PETA's victims, was paid for with the donations of animal lovers who could never have imagined that the money they donated to help animals would be used to end their lives instead. In fact, in the last 11 years, PETA has killed 29,426 dogs, cats, rabbits, and other domestic animals.

Most animal lovers find this hard to believe. But seeing is believing. And if it is true that a picture speaks a thousand words, the following images speak volumes about who and what PETA really stands for. 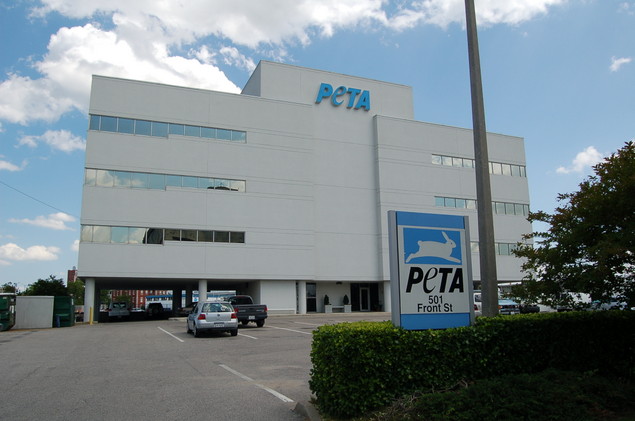 The PETA headquarters is on the aptly named Front Street. While claiming to be an animal rights organization, PETA does not believe animals have a right to live. Instead, it believes that people have a right to kill them, as long as the killing is done "humanely," which PETA interprets to mean poisoning them with an overdose of barbiturates, even if the animals are not suffering. In 2012, 733 dogs entered this building. They killed 602 of them. Only 12 were adopted. Also in 2012, they impounded 1,110 cats. 1,045 were put to death. Seven of them were adopted. They also took in 34 other companion animals, such as rabbits, of which 28 were put to death. Only four were adopted. 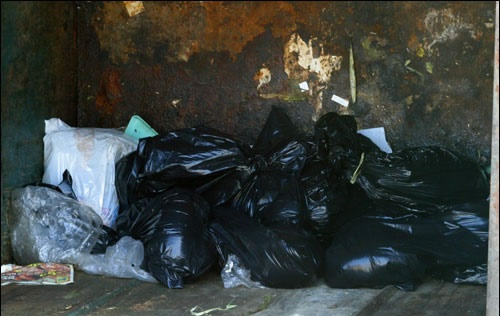 A supermarket dumpster full of garbage bags. When police officers looked inside, they found the bodies of dead animals -- animals killed by PETA. PETA described these animals as "adorable" and "perfect." A veterinarian who naively gave PETA some of the animals, thinking they would find them homes, and examined the dead bodies of others, testified that they were "healthy" and "adoptable." 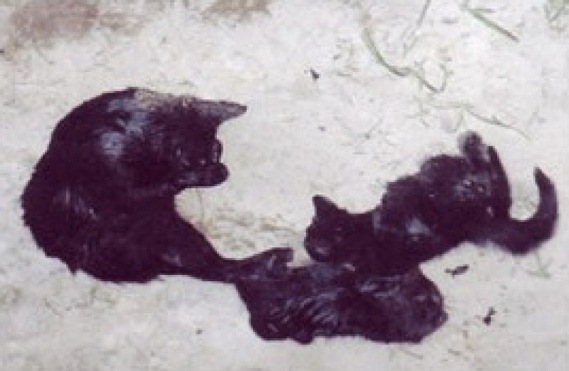 A mother cat and her two kittens, all perfectly healthy and adoptable and none in danger of being killed until they were given to PETA by a veterinarian who was trying to find them homes and was told by PETA employees that they would have no problem adopting them out. After PETA lied to him and the mother and her kittens were entrusted to their care, they reportedly killed them, within minutes, in the back of a van. 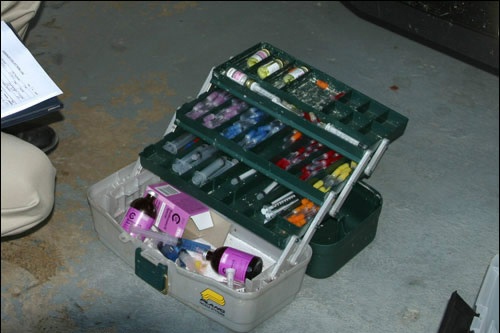 The PETA field killing kit found by police in the back of the PETA death van in Ahoskie, North Carolina. 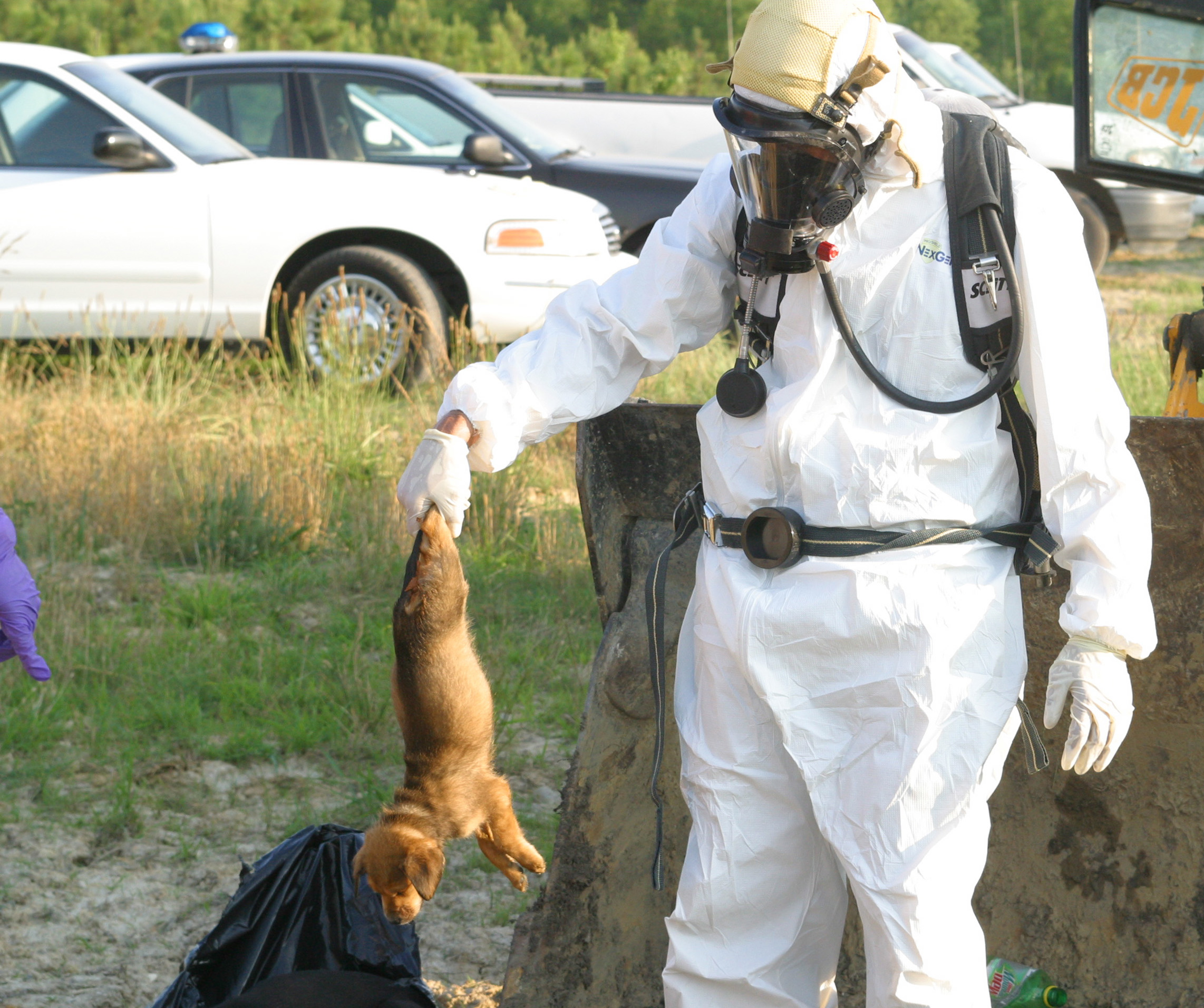 An Ahoskie Police Detective dressed in a hazmat suit prepares to bury a puppy killed by PETA. This puppy and dozens of other animals including cats and kittens were found by police throughout June of 2005 after PETA employees dumped them in a garbage bin in North Carolina. 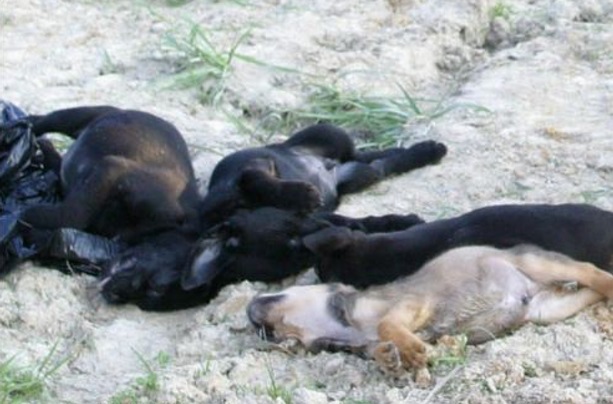 Puppies killed by PETA in the back of a van -- a donor-funded slaughterhouse on wheels. Despite $35,000,000 in annual revenues and millions of "animal-loving" members, PETA does not even try to find them homes. PETA has no adoption hours, does no adoption promotion, has no adoption floor, but is registered with the State of Virginia as a "humane society" or "animal shelter." 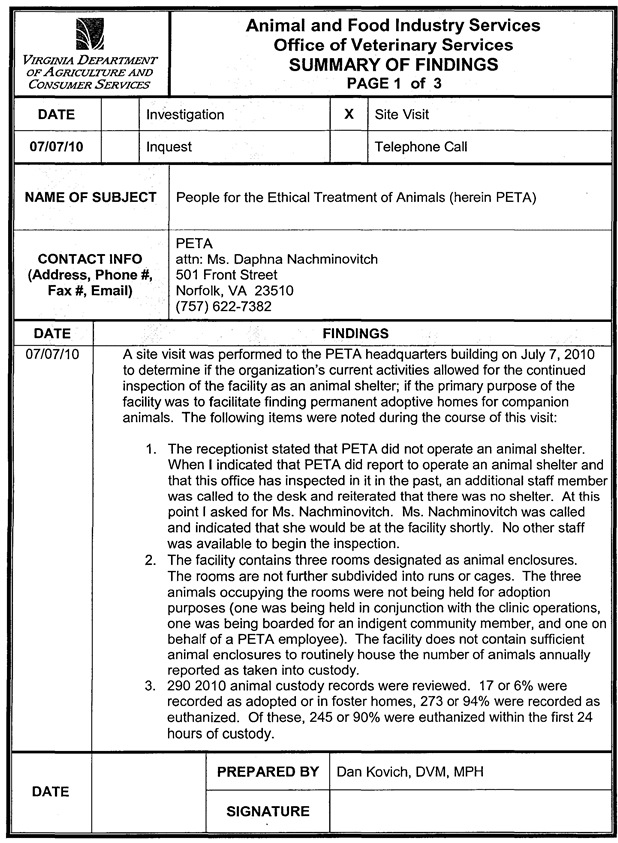 According to inspection reports by the Virginia Department of Agriculture, the PETA facility "does not contain sufficient animal enclosures to routinely house the number of animals annually reported as taken into custody... The shelter is not accessible to the public, promoted, or engaged in efforts to facilitate the adoption of animals taken into custody."

Routine inspections often found "no animals to be housed in the facility" or, at best "few animals in custody," despite thousands of them impounded by PETA annually. Since they take in thousands per year, where were they? "90% [of the animals] were euthanized within the first 24 hours of custody," according to the Virginia Department of Agriculture inspector. How can people adopt animals from PETA when they kill the animals they acquire within minutes without ever making them available for adoption? How can people adopt animals when they have no adoption hours, do no adoption promotion, and do not show animals for adoption, choosing to kill them without doing so? In fact, when asked by a reporter what efforts they make to find animals homes, PETA had no comment. 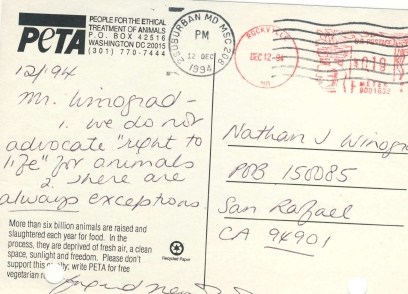 A postcard written and signed by Ingrid Newkirk, PETA's founder, admitting that PETA does not believe animals have a right to live, despite its public perception of PETA as an "animal rights" organization. The right to life is the most fundamental of all rights. It is fundamental because without it, no other "rights" are possible. How can animals be guaranteed the right to food, water, shelter and protection, when those things can be taken away by killing them? 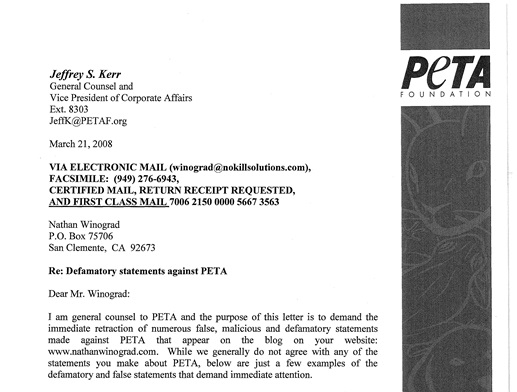 Many animal lovers who have publicly condemned PETA for their killing have received a letter from the PETA legal department, threatening a lawsuit. However, because a lawsuit would allow for subpoenas of PETA employees past and present -- leading to under-oath testimonies about the grisly reality of what has and is going on at PETA headquarters -- it is unlikely that PETA would ever follow-through with these empty threats.

Their donor-funded attorneys rattle their sabers, but know they have a lot more to fear from the public disclosure that would result from a lawsuit than the animal activists who are truthfully -- and, given PETA's threats and intimidation, bravely -- reporting on PETA's atrocities against animals in the hope of bringing them to an end. When you donate to PETA, you not only fund the killing of animals, you fund the intimidation of animal lovers. 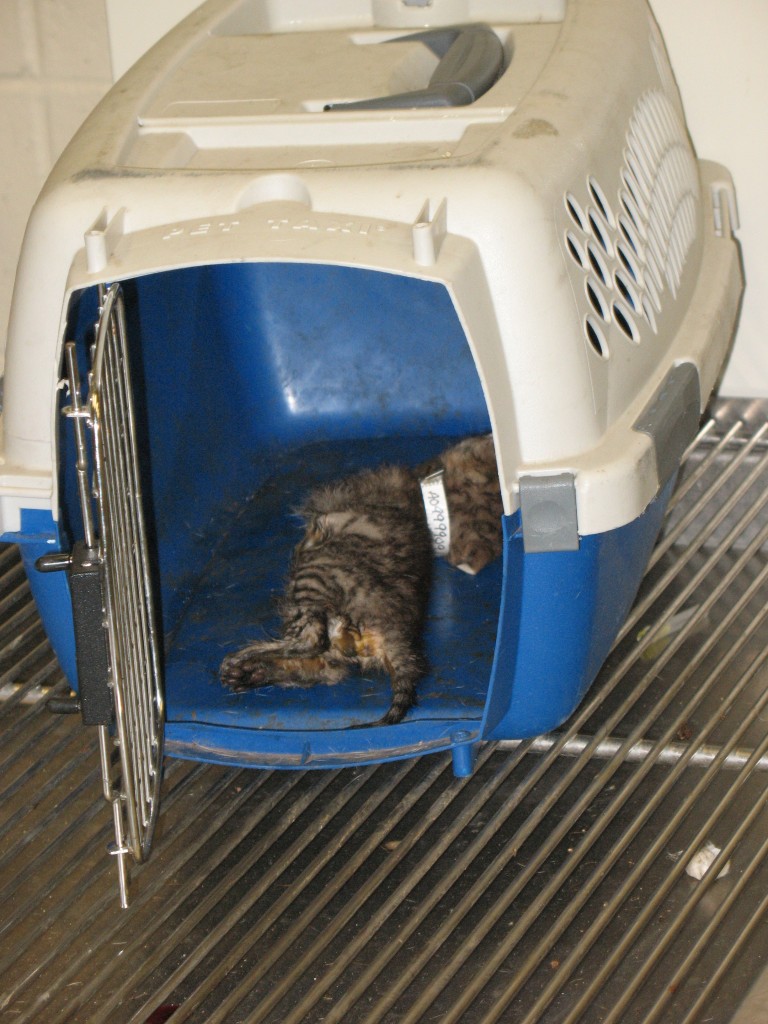 Not only does PETA kill animals, they also defend the killing of animals by others. This is a dying kitten in a Houston shelter after staff "lost" the kitten. When he was found, he was near death. His last hours were ones of suffering. Houston officials put job applicants with a history of violence, a history of criminal behavior and those who scored the lowest on city aptitude tests in animal control. When I was hired by the Houston Health Department to assess the shelter, my advice regarding staff was to fire people who abuse animals; hire those who care about them. PETA defended this shelter, urging government officials not to listen to me. 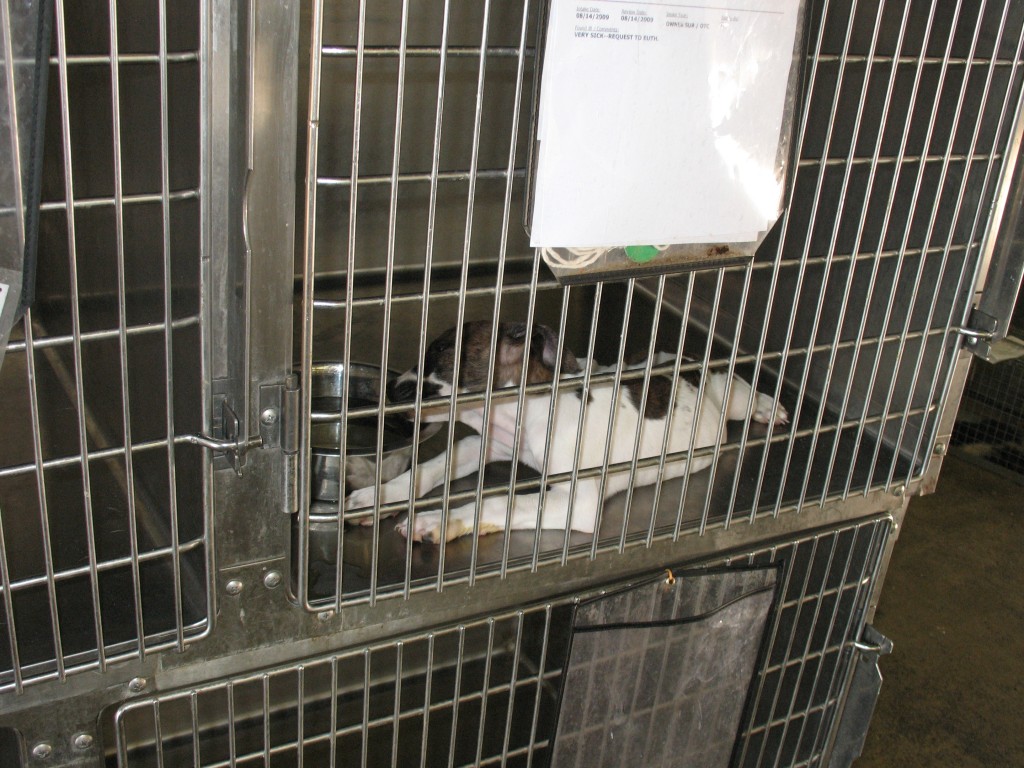 A puppy dying of parvovirus in the Houston shelter is not given anything soft to lie on as she urinates all over herself. Here she sits, unable to keep her head up, alone in a cold, barren stainless steel cage without receiving necessary veterinary care. Other shelters have a better than 90% rate of saving dogs with parvovirus. In a letter to the editor of the Houston paper, PETA publicly defended this shelter, urging Houstonians to reject my advice on the need for reform and how to do so. 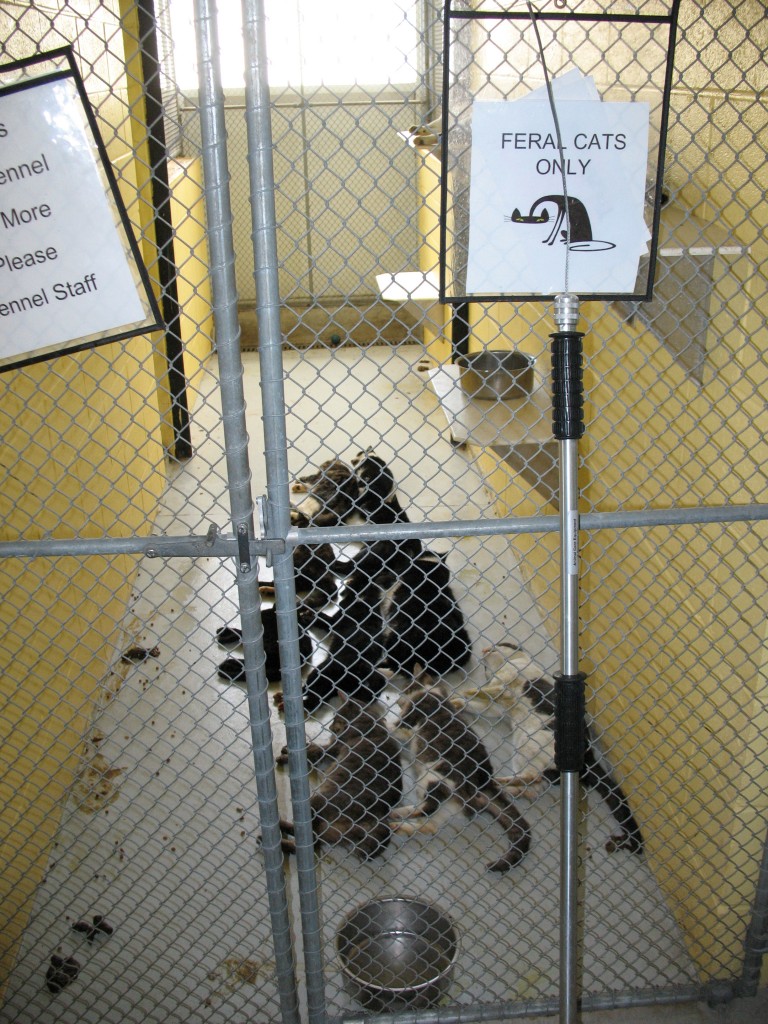 The PETA solution: dead "feral" cats in a Florida shelter. PETA successfully defeated SB 1320, a law that would have clarified that nonlethal programs to neuter and release feral cats, rather than killing them, are legal in Florida. As shelters and health departments nationwide embrace trap-neuter-release programs, PETA remains a stalwart opponent of this humane alternative to killing, arguing that healthy feral cats should continue to be killed, even urging their supporters to take them to shelters or veterinarians to do so. The PETA website states that, "the most compassionate choice is to euthanize feral cats. You can ask your veterinarian to do this or, if your local shelter uses an injection of sodium pentobarbital, take the cats there." This shelter used "an injection of sodium pentobarbital," killing the cats in front of other cats, catch-poling the cats as they tried to flee while they urinated and defecated all over the kennel in fear. That is how terrified feral cats behave in shelters. Apparently to PETA, this is as it should be. 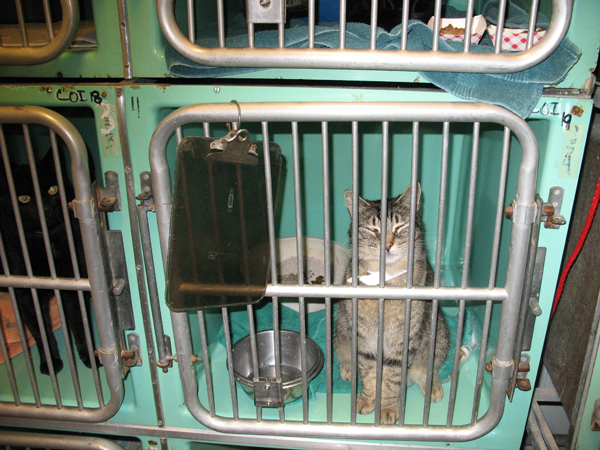 A cat in the King County, Washington shelter begs for food and water. Cats in the infirmary were not fed or given water over a three-day holiday weekend and both their food bowls and water bowls are empty. Although staff was assigned to the shelter, supervisors and staff chose to socialize instead. I was hired by the King County Council to assess the shelter. My advice: Hire supervisors who are not part of the same union so as to eliminate conflicts of interest; all staff should be given a checklist of assigned duties; and supervisors should double check that those duties have been done. In a letter to the King County Council, PETA told officials not to listen to me because I was "radical." 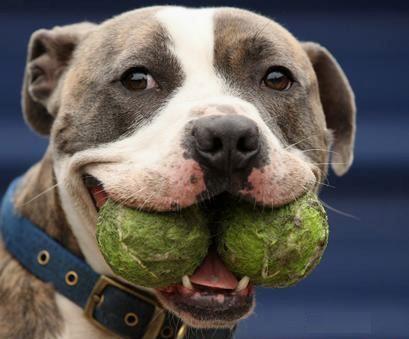 If PETA had its way, this dog would be killed in every shelter in America because someone says he looks like a "pit bull." According to Ingrid Newkirk, a growing number of shelters are enacting policies banning the adoption of pit bulls and requiring their automatic destruction and PETA "supports the pit bull policy." 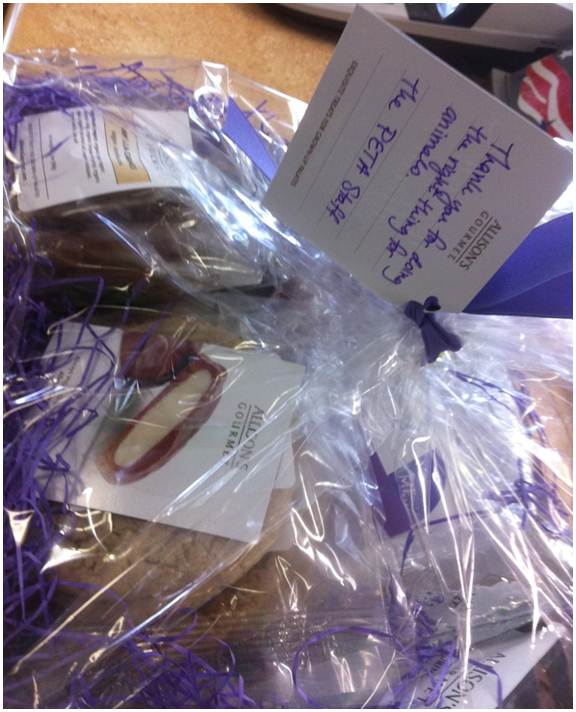 After finishing the year saving 98% of cats and 94% of dogs, the fourth-year Shelby County, Kentucky had 90+ percent save rates, they announced they were crowded and would begin killing animals. Once again, as they have done so many times before,the Shelby County No Kill Mission, a private organization both responsible for and dedicated to ensuring that Shelby County remains No Kill, went to work and the "crisis" was averted, bringing the population down through rescue, foster and adoption.

Unlike Shelby County No Kill Mission, PETA also reached out to officials, but not to help save the animals. PETA didn't ask what they could do with their $35,000,000 a year in revenues and millions of animal-loving members to help save animals being threatened with death, as donors intended and as supporters assumed. They didn't offer to help the Shelby County shelter find homes, build temporary kennels, board animals, foster animals, adopt animals or even just get the word out across Kentucky that animals need help. Instead, PETA sent Shelby County government and shelter officials a gift basket, with a note thanking them for their decision to start killing again after four years. "Thank you for doing the right thing" wrote PETA.

These pictures reveal the truth about PETA, a reality that is deeply at odds with the public's perception of that organization as a radical animal rights group. In practice, PETA is the functional equivalent of a slaughterhouse, while their efforts to undermine the lifesaving work of animal lovers throughout the country continually derail urgently needed reforms that would further the rights of our nation's homeless dogs and cats.

By defending regressive and cruel shelters and sheltering policies that mandate killing, by calling for the death of certain groups of animals entering shelters and by injecting thousands of animals with a fatal dose of poison every year, these actions are not only inconsistent with the mission of an animal rights organization, they are the antithesis of one. Only one question remains: Why is anyone still donating to PETA?