We asked, they spoke, in surprisingly good English: It turns out dogs have a lot to say about PETA joining up with a group that's advocating to ban all pit bulls.

Well, some of them do, anyway. 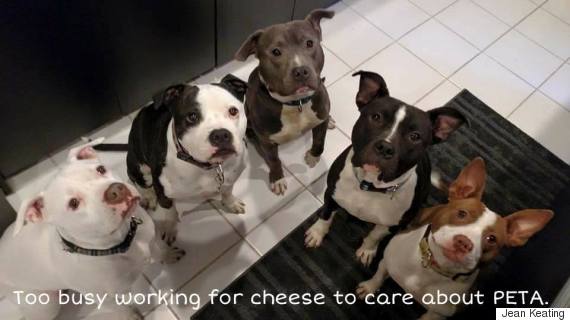 That's right, People for the Ethical Treatment of Animals has thrown its hat in with an anti-pit bull coalition.

This group's agenda is to have pit bulls banned across the United States -- a move which seems to lead, inexorably, to the dogs being killed.

We're not talking about dogs who have done anything wrong. This concerns all pit bulls.

The therapy dogs, the police dogs, the war heroes, those who've saved lives, the one belonging to model Gisele Bundchen, and those who are still in shelters, waiting to be given a chance.

then there was the time Tom Hardy kissed a pitbull puppy. (The Drop is currently streaming on HBO. You're welcome) pic.twitter.com/ksr73PQk8E

And by the way, the term "pit bull" doesn't refer to any specific breed of dog; the way it's being used by these groups, pit bull means dogs who are one of a few kinds of terriers, and mutts with blocky heads and short coats. Pit bull is a physical description, not a breed.

The other groups that are part of this weird alliance purport to want to remove all pit bulls from society in the name of public safety. Never mind that every reputable animal welfare group looking at this issue has found pit bull bans do not increase public safety. Hence, these laws, called breed specific legislation or BSL, are on the wane.

PETA's reasoning is even more of a head-scratcher. (Nope, not fleas. Just confusion. That's what the vet says, anyway.)

The organization claims it has thrown its weight behind this foul gang in order to "help" pit bulls. 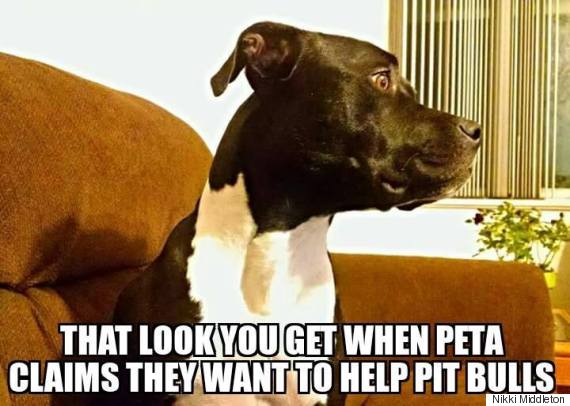 PETA's argument appears to be that because some pit bulls are abused, all pit bulls should be terminated. This comes from a 2009 blog post that PETA has been tweeting in response to chagrined animal lovers asking just what in the hell is going on here.

It's bizarre logic that has no natural end. Since some fish might be caught and eaten, should we detonate a nuclear bomb in the ocean? Since child abuse exists in this world, should we commit widescale infanticide? By the way, any sane person's answer to these questions would be of course not.

PETA's spokesperson Colleen O'Brien told me by email that the group is planning on "putting together a feature on pit bulls" that might help explain. But it won't be ready for a few weeks.

In the meantime, others have been quite articulate on the topic of how utterly maddening it is to find PETA using its vast resources in this particular manner.

This blog post describes how many who love dogs, including pit bulls, are feeling right about now:

Killing a dog because of how he looks is not ethical. Judging a dog by appearance not behavior isn't animal welfare. And depriving an animal of a loving home is certainly not Animal Rights.

Shame on you PETA.

And now, the dogs have the floor -- don't worry; they're housetrained:

Emily Randolph
Kelly McLaughlin
Jacqueline Bedsaul Johnson
Advertisement
DF Guajardo
Kelly Garrison
Carlene Castleman
Advertisement
Janette Hamilton
Susan Pearman
"PETA? Hahahahahaaaaaaa!!"
Roo Yori
Advertisement
Luke Westerman
Trish McMillan Loehr
Jean Keating
Advertisement
Barbara Boragine Telesmanic
Trish McMillan Loehr
Emily Randolph
Advertisement
Jenna Joy
Jenna Joy
Nathan Stewart
Advertisement
Cindy Gillespie Beard
Dan Haupt
"Hooman said to show my vicious side." - Duke
Andrea Kilkenny
Advertisement
Cindy Gillespie Beard
Jeff Theman
"It's a sad day when a self-proclaimed animal welfare organization (ahem, PETA) can deceive millions of donators for 35 years, while doing the exact opposite of the mission to protect formerly abused dogs/animals like me. That is called a contradiction."- Preston
Nikki Middleton
Advertisement
Jean Keating
Kendo Lamberti
"Wake me up when animal welfare can unite & work on behalf of ALL animals......"
Kirstyn Northrop Cobb
"I have heard that PETA would not have adopted me out and would have rather euthanized me in an effort to 'protect' me. Well, my adopted mom does a great job of keeping me safe and happy and comfortable. And I hear that there are many more amazing adopters out there for dogs like me. Kind of contradicts the PETA theory, doesn't it?" -Jefferson
Advertisement
Mike Toma
"PETA?! I'll take a chicken pita without tomatoes and one PETA with no ignorant buttholes." - Diesel
Kimberly Stojakovic
Laura Myers
Advertisement
Patti Dailey
Mst Scott
Nicole BadPenny
Advertisement
Gale Frey
Alison Reder
Renee Martini
Advertisement
Amnon Amnon Amnon
"Luke and Babette don't have much to say, but their disappointment is obvious."
Rose Tremblay
Janette Hamilton
Advertisement
Jacqueline Johnson
Dan Adams
"Preventing the Equal Treatment of Animals "
Kasara Koths
Advertisement
Lisa Goldsmith Glime
Kate Ostertag
PETA should "give up their bully pulpit."
Janette Hamilton
Advertisement
Amanda Rodriquez
Mel Isaacs
"PETA would do *what* to my mate given half a chance??" - Sidney the cat
Jean Keating
Advertisement
Amanda Harris
"So you're telling me PETA joined an anti-pit coalition? Aren't I a dog? Aren't dogs animals? Wait a second... Also I was told there would be treats..." - Chloe
Dianna Preat Matteson
"Dear PETA: how can you honestly call yourself an animals' rights group if you want to DESTROY me?"
Lynn Hopkins
"The face of pure evil?"
Advertisement
Tanisha Degenhardt
Go To Homepage