PETA reportedly stole a family's pet chihuahua from their porch, and killed it.

You heard that right. Yes, we're talking about that PETA: People for the Ethical Treatment of Animals. The theft was caught on video, and has been reported by WAVY.com, local media in Accomack County, Virginia.

County Sheriff Todd Godwin insists that he charged the two PETA workers with larceny. The prosecutor has apparently refused to pursue the case, however, citing insufficient evidence of "criminal intent."

Let's try to comprehend this: we have a home surveillance video clearly demonstrating that a van marked "PETA" pulled up to the house of Wilbur Cerate, and that someone took the family's chihuahua, Maya. PETA has reportedly admitted that Maya was killed: they arrived later with a basket of fruit as compensation, says Maya's owner. (For some bizarre reason, PETA thinks that a nice basket of food makes killing pets okay.)

Hence, we have what we are told is pretty strong evidence that a crime was committed. An admission of guilt has been alleged. What part of the notion "criminal intent" am I missing here?

We also seem to have powerful evidence that the girl who owned Maya is inconsolable. The New York Daily News reports:

The Mexican immigrant said the tiny dog had been the only thing that cheered his daughter, who was having difficulty adjusting to her new country. 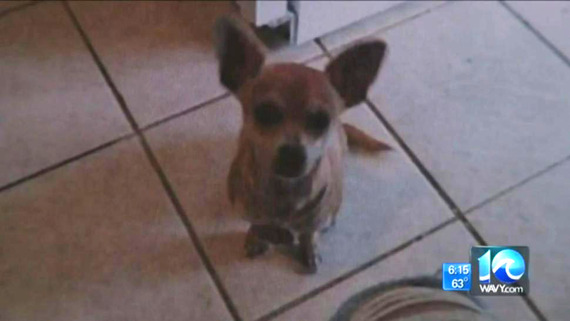 PETA has refused to comment. Local reporter Anita Blanton has tried valiantly to elicit a statement from PETA headquarters in Norfolk, Virginia, and has thus far had no luck.

It's hard to believe, but People for the Ethical Treatment of Animals has a long history of this kind of abuse. You'll find it documented in ugly detail here: "Shocking Photos: PETA's Secret Slaughter of Kittens, Puppies." Even more difficult to believe is that they tend to get away with it.

In 2005, PETA employees killed numerous healthy dogs and cats in the back of their van, and deposited the bodies in a dumpster behind a mall. They were charged with "21 felony counts each of animal cruelty," but were convicted only of "littering."

The littering conviction was later overturned. PETA has very good lawyers. "Essentially, the littering charges against Adria Hinkle and Andrew Cook were overturned because the prosecution failed to prove that a dumpster is not the proper place for trash." ("Trash" here being dead pets.)

Since then PETA has been careful to dispose of bodies legally, using a professional crematorium. (They have killed over 29,000 animals.) But they are not being careful enough, it seems, when it comes to rounding up neighborhood animals. PETA are keen on eradicating strays -- in particular, they urge the mass killing of feral cats -- but they do not have permission to grab a family's pet dog from their home. Clearly they did not expect that the Cerate house would have a surveillance camera.


WHAT YOU CAN DO

PETA would prefer that people not keep animals for their amusement. If you personally find this unacceptable, however -- the alleged theft and destruction of a family dog -- then please let the local prosecutor know how you feel. Yes, PETA has a huge budget, and powerful lawyers, but public outrage can be effective.

The Commonwealth Attorney's name is Gary Agar. His office number is 757-787-2877; the office email is commatt@verizon.net.

You can also make your displeasure known to The Sam Simon Foundation. Sam Simon, co-creator of The Simpsons, has long done wonderful work for animals, and his foundation works towards -- among other things -- saving strays from so-called "euthanasia."

Mr. Simon is currently fighting cancer, and has announced that he is leaving a substantial portion of his 100-million-dollar fortune to PETA. It seems clear that this is a truly decent man, who hasn't the faintest idea what kind of organization he has decided to leave his money to. The situation is not unusual: most celebrities are kept in the dark regarding PETA's nature.

Mr. Simon is very ill, and it's perhaps best to tweet your outrage to his foundation (whose work PETA is busy undermining): @ssfoundation1

And please let PETA themselves know what you think: @PETA

The citizens unlucky enough to share their neighborhood with PETA headquarters have long been concerned that the group will target their pets. Not many of these people have the means to pursue a civil suit against PETA, but this is why we have criminal laws: it is absurd that a family's dogs and cats cannot be protected from the depredations of this organization.