The passing of folk music legend Pete Seeger has rightly reminded us of his incredible peace and civil rights anthems, along with his important social justice campaigns (notably the seemingly quixotic but ultimately successful initiative to clean up the Hudson River.) But let us also highlight the powerful effect of his selflessness, for his endless support of grassroots attempts at social renewal planted seeds of solidarity that will bear fruit for years to come.

My experience is typical. Pete Seeger did not know me, and yet countless people in my world have been encouraged by him in their own efforts to further what Dr. Martin Luther King called the Beloved Community. On the day Pete Seeger's death was announced, this was brought home to me via a list-serv message from a friend and longtime peace activist in the Netherlands, Jim Forest, who wrote:

Such a good man, and such an inspiration. I first met him when I was high school student and he was singing locally, then again at a Weavers concert. In later years I was several times involved in arranging events at which he performed. One of these was a concert in 1970 or '71 -- a benefit for Emmaus House, the house of hospitality in Harlem which I was then a part of. (Here's a photo taken at that event.) 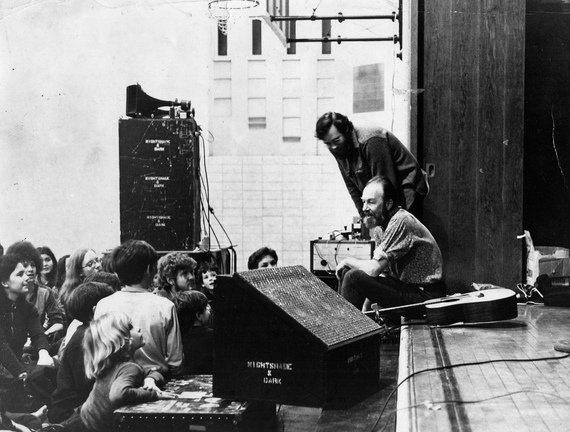 Whenever I asked him if he could do something, he always said yes. If any money was earned, he took not a penny. For several pre-internet years I ran a monthly news service called Peace Media Service. Pete was an avid PMS reader and also a generous donor. When PMS circulated a poem by Seamus Heaney, "The Republic of Conscience," he memorized it and frequently recited it at concerts.

Suddenly I recalled the many occasions when Pete Seeger gave of himself for people in my own world. When our small town sponsored a concert to support the cleanup of the Hudson River, Pete showed up, unannounced, and played alongside our teenage son's band. When our assemblyman, Richard Brodsky, was running for attorney general, there was Pete, singing at a fundraiser, for they had worked together to try and shut down the Indian Point nuclear power plant. When the head of our campus Peace Studies program, Joe Fahey, wanted to do an oral history of Pete, he readily obliged.

All of this I recounted at dinner with my husband, and he, in turn, reminded me about the time, on his own campus, that he overheard a colleague saying, "C'mon Pete, hurry up Pete, or we'll be late for class." Sure enough, there was the famed Pete Seeger, by now in his 80s, allowing himself to be hustled around to ordinary classrooms. But the key, of course, was that Pete Seeger saw none of this as ordinary. He saw us all as special -- as precious -- as part of a vital project of justice and peace and of joyous, life-sustaining music.

Like a great tree planted by the water, he would not be moved, even as that tree's roots have spread far and wide: largely unseen, but powerfully effective in support of the Beloved Community. And deep in my heart, I do believe that we shall overcome some day.