I have been trying to interview Emmy Award-winning composer/philanthropist Peter Buffett for two years.

Both musicians have been on my radar because I cover Thought Leaders and Global Citizens - and they represent everything that is right with celebrity: The power to achieve goodness on a grand scale. 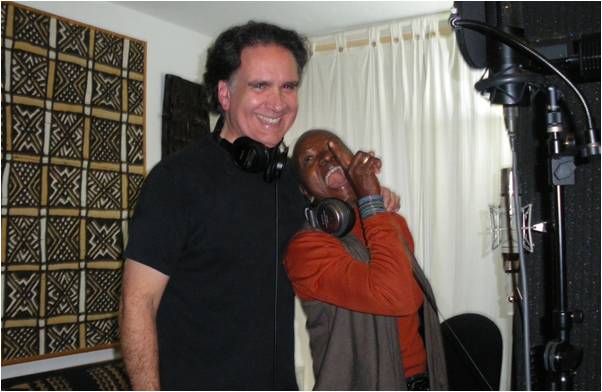 Peter (Wiki) and Angelique (Wiki) spoke to me by phone this week about their latest project. It's their new charitable single release called "A Song for Everyone" in support of the Batonga Foundation, Angelique's non-profit dedicated to advancing young women's education in Africa.

The foundation currently has an active presence in the countries of Benin, Cameroon, Ethiopia, Mali, and Sierra Leone.

The name "Batonga" stems from a word Angelique made up as a response to taunts when she was going to school -- the boys didn't know what the word meant, but to her it was an assertion of the rights of girls to education. Batonga!

Angelique, a native of Benin who lived for years in Paris and now resides here in New York City, and Peter, who was raised in Omaha and to this day has a deep appreciation of Native Americans, united to create this moving single.

100% of the proceeds from downloads of the single will benefit the Batonga Foundation, to give girls a higher education so they can take leadership roles in Africa.

Another crucial part of their mission is advocating for community awareness of the value of education for girls by addressing gender prejudice.

There is a growing consensus that the most cost effective way to help African nations reduce poverty and improve the quality of life for their citizens is to support education for girls.

Former United Nations Secretary-General Kofi Annan summed it up when he said, "To educate girls is to reduce poverty." 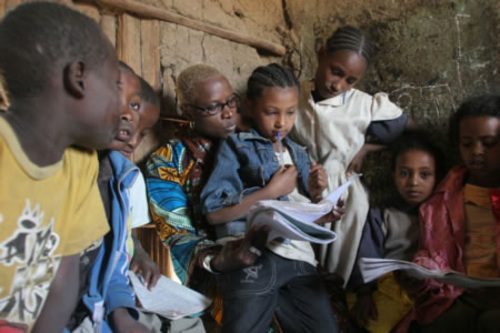 Chatting with Peter and Angelique was the highpoint of my week. Such positive energy! Angelique told me:

My mom was educated. She understood the importance of educating her children, boys and girls. When a girl is born in Africa, she has no identify. Education changes that!

"No woman should ever go through what I went through - you must get your education!," she told me.

My brothers were taught the basics - but also how to go to the market, cook, and sew. The neighbors would laugh about this, but my mother would say: "God forbid if their wife dies - how will they know how to take care of themselves?"

My father was very strong as well and he wanted us all educated. He pushed hard for us. My dad was my champion and he supported me to become an artist.

These ideas were ahead of their time, and the neighbors called my parents "White people," which was not a compliment.

My dad said, '"Call me anything you want - my children will be educated!'"

Both Angelique and Peter stressed how important it was for men to be part of the process of assisting girls. Men must be included. Peter feels that by not being a woman he has a fresh perspective to offer.

Angelique confirmed that by saying she was so happy to be able to work with Peter in helping African girls. He serves as a male role model. 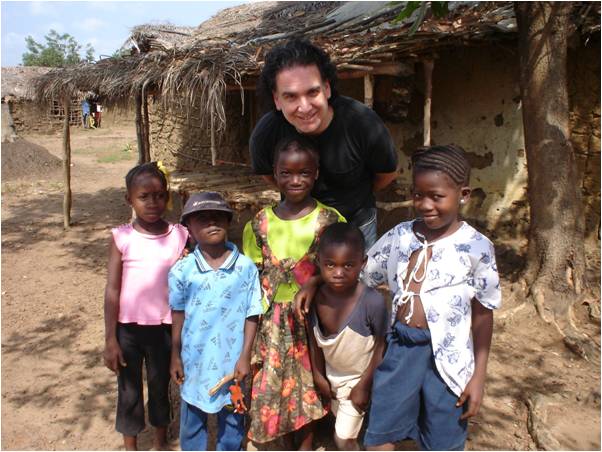 Emmy Award-winning composer/philanthropist Peter Buffett in Liberia with the IRC.

Peter Buffett and his wife Jennifer run the NoVo Foundation. Peter laughed that occasionally friends compliment him on helping his wife 'do her thing' with philanthropy. Trust me, it is their thing. Think Melinda and Bill.

Chatting with Peter, I got immediately that he was on a par with Bono in terms of musicians who know the intricacies of international development.

Peter wants to leverage his own assets to solve the problems of the world, not just hand people the proverbial fish. It is obvious he has learned a few lessons from his father Warren Buffett. Peter told me:

No amount of money can solve all the problems in the world. The challenge for us is to try to keep girls in school past the age of 12, which will impact later generations to come.

We need to leverage our resources to create the 'Girl Effect,' as the Nike Foundation has called it.

Leveraging is what the three B's are into: Bono, Bill Gates, and Bill Clinton. Peter gets this deeply.

Angelique sees the 'Girl Effect' as a form of trickle-up social development. Similar to how immigrant children in America teach their parents how to make it here, the young African girls learning through the Batonga Foundation are encouraged to go home and teach their mothers:

In Africa, many women sign their names at the ballot box with an "X." Our girls can teach them how to write their own name. Then, voting becomes real for them- and the chances of fraud are reduced.

I also ask my girls to teach their mothers how to count. This ability alone opens the world for their moms. We have reversed the process: Our children are teaching our adults.

Peter is just himself - he's neither afraid to sound hackneyed nor controversial:

I realize it sounds trite, but these young women could be your sisters, your nieces, your wives, your grandmothers. We truly are one big family. Our single, "A Song for Everyone," is about this.

You know, I personally hate the word "charity." It assumes someone is lesser. We are all in this together.

We simply must lift everyone into the dignity that we all deserve, and in so doing, humanity wins. We all win. Together.

We need money, but we also need people around the world to keep our girls in their hearts, to think of them as their daughters - not just an anonymous stranger that one gives charity to.

And I cannot deal with people telling me anything is "impossible." Nothing is impossible! Humanity needs to come together, and we can. And we are.

Look at Haiti! Everyone wants to help because we are all connected. We are one planet. Our survival is based on one another.

I asked Peter how he became involved with a cause so far from Nebraska. Growing up in Ohio myself - and working in Asia, Africa, and the Americas - I felt I knew his answer in advance, but felt compelled to ask the obvious. He replied:

Sure, there is poverty in Omaha. Deep pockets of poverty. We just need to extend a hand. Not a hand-out, but a hand. To anyone, anywhere. In Omaha and beyond.

Having just attended the international cell phone conference in Barcelona with 49,000 participants and 1,300 venders, I am now fairly well versed in how the connectivity cell phone technology offers can help in Africa.

Peter, I discovered, knows mobile phone technology inside and out:

There is great promise coming with cell phones, from getting prices to farmers - to being able to pay rural teachers by cell phone banking. Mobile education will be huge.

I was in West Africa where I saw lesson plans being run off on a broken-down copier. Soon, lesson plans will be downloaded to each teacher's cell. It will be transformational.

My mentors in Benin need cell phones to talk to each other effectively. Right now I need 24 cell phones from the same provider to facilitate their communications. Do you know any C.E.O. from a cell phone provider in Benin? Call them for me - I need help!

In my piece about the United Nations concert last fall I wrote:

Angelique then took the stage and sang the world-popular Swahili song, Malaika. She brought the house down with her rendition of Axe Mama Africa!

Her striking voice, stage presence and her fluency in multiple cultures and languages won respect from her peers and expanded her following across national borders.

It also earned her access to humanitarians who sensed the passion in the words of her songs, resulting in her long-term dedication to global charity work.

She has hosted the prestigious and globally important Mo Ibrahim Foundation's Prize for Achievement in African Leadership in both Alexandria, Egypt and Dar Es Salaam, Tanzania.

Peter does not rest on his laurels either. He and Akon's social action website, IsThereSomethingICanDo.com, re-launched last year to coincide with the release of the pair's latest single, "Blood Into Gold."

Now powered by DoSomething.org, a leading cause-focused social networking site, this site is an on-line destination where users can get involved, share personal experiences in making a difference, and meet others with common goals - and a passion for change.

Spotlighting a new social cause of worldwide concern monthly, IsThereSomethingICanDo brings much-needed attention to human trafficking as the first featured subject - with more to come.

As the youngest son of legendary investor Warren Buffett, Peter explains -- in his live, touring "Concert and Conversation" series -- the reasoning behind his father's decision not to give his children a financial head start in life.

He talks about how important it is for each person to define his or her own path, regardless of their wealth or background. Infused with live music performances and video clips from his film, TV, and philanthropic work, Peter's candor and unique talent make for an uplifting and rewarding experience.

Peter uses social media extensively and has an active presence on Facebook and NING. His latest book, Life Is What You Make It, is now available for pre-order at Random House. The book takes on themes of following passions over conventions, and how part of life's journey can be found in the process of giving back.

Angelique ended our interview by telling me what she says in Benin: "I tell my girls that behind me there are many, many people who care so deeply about them. They look at me with such open eyes!"

To join the ranks of those who care about Benin's young women, and the work that Peter Buffett and Angelique Kidjo are doing to support them, download their single today.

Donating to the foundation is simple: Download the single for yourself, "gift" the track to your friends using iTunes, or via Peter's on-line store. Or just make an old-fashioned contribution on-line.

How Can We Help Orphans in Kenya - When There are 2.4 Million of Them? (Daily Kos)

Building Cellular Connectivity Where None Exists to Bridge the World