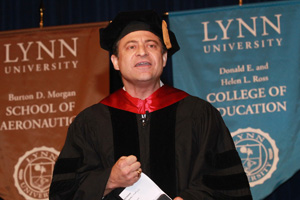 I feel better today than I did yesterday. I still know that there are problems with the global economy, that America's unemployment is still high, and that the housing market is still unsettled. Despite these facts, I still feel better, because I've just spent the last 24 hours with Dr. Peter Diamandis while he visited Lynn University to give our 2012 commencement address.

Peter is the author of the New York Times bestseller Abundance: The Future Is Better Than You Think and the CEO and founder of the X PRIZE Foundation, which awards millions of dollars to small groups of people who do extraordinary things. He definitely believes in the power of positive energy. However, the main reason I feel better is that during my visit with him, and in his commencement speech to our graduates, he laid out a compelling argument that even though the world may seem to be going to hell in a handbasket, in fact it is not. In his view the world that the class of 2012 is entering is a world where abundance, which he defines as providing everyone with a life of possibility, is within our grasp.

He starts by pointing out that the world today is so different from the world of just a few years ago, thanks in part to the rapid change in technology. For example, in Africa, mobile-phone penetration is growing exponentially, from single-digit percentages in 2000 to 70 percent by next year. This means that vast numbers of people with little or no education have access to the enhanced communications, knowledge, and power a cellphone provides -- including access to the Internet. As he puts it, "A Masai warrior with a cellphone has better mobile-phone capabilities than the president did 25 years ago." And as he told our students, the smartphones they were carrying to graduation provide better mobile communication than world leaders had just 15 years ago.

Peter essentially believes there are three main forces at work that, when coupled with the unprecedented power of growing technologies mentioned above, provide significant, abundance-producing potential. These forces include:

As he said, each of these three forces is amazingly powerful on its own. But together, with the growing potential of technologies, "the unimaginable becomes the now actually possible."

During our time together, we also talked about a topic important to both of us: innovation. If there is one thing that the students I have met share in common, it's their desire to make a difference in their world. This is good because, according to Peter, this desire is one of the key motivators that drive innovation.

For example, Peter wanted to make spaceflight more possible for more people. He said it took him 10 years to get the first X PRIZE for spaceflight started. But by the time it was awarded in 2004, 26 teams in seven countries raced to do something that experts (whom Peter defines as "people who will tell you exactly how something can't be done") said just couldn't be done by private firms: build and launch a spacecraft capable of carrying three people to 100 kilometers above the Earth, twice within two weeks. The $10-million X PRIZE launched an entirely new industry, pushed technological innovation. and helped make it possible for more people to experience spaceflight. This all started with Peter's desire to make a difference.

There are countless other examples of people, some famous and some whose names you've never heard, who are attacking the world's greatest challenges with new possibilities fueled by ever-improving technologies, in areas as diverse as food, water, energy, health care, and education. Although the challenges they take on may differ, all their efforts will help fulfill the promise of abundance for all people on the planet during the lifetime of our 2012 graduates.

This is the knowledge Peter Diamandis left me with, and this is why I feel better today than I did yesterday.