When you play the game of Emmys, you win or you... uh... actually, that’s the only option for Peter Dinklage.

On Sunday night, the actor took home the Emmy for Outstanding Supporting Actor in a Drama Series for playing Tyrion Lannister on “Game of Thrones.” It’s his fourth award in the category (the most of any actor), as he edged out Giancarlo Esposito (“Better Call Saul”), Jonathan Banks (“Better Call Saul”), Michael Kelly (“House of Cards”), Chris Sullivan (“This Is Us”) and his HBO co-stars Nikolaj Coster-Waldau and Alfie Allen. But when Dinklage made his acceptance speech, he shined the spotlight on the “Thrones” showrunners: David Benioff and Dan Weiss.

Dinklage started by admitting he had no idea what he was about to say and counting himself fortunate to be “a member of a community that is nothing but all about tolerance and diversity,” before singing the praises of David and Dan, the divisive final season be damned.

Dinklage called the pair brilliant, talented and, though it was bleeped out, reportedly the “funniest motherfucking people” he’s “ever been lucky enough to work with.”

It’s been about 10 years, all said and done, since the moment I met Dave and Dan ’til right now. I had no idea what I was getting myself into. But I knew that David and Dan were quite brilliant. Ten years of absolute sweat, but 10 years of the most incredible, talented, funniest [bleeped out] — hey, it’s over, I don’t care — I’ve ever been lucky enough to work with. We did nothing but sweat. We did nothing but laugh. Dave and Dan, we literally walked through fire and ice for you. Literally. And I would do it all again in a heartbeat. Thank you.

Dinklage’s words stand in notable contrast to what the fans had to say about the showrunners during Season 8.

Reddit users apparently Google-bombed search results to make the showrunners’ pictures come up if one searched for “bad writers.” A viral petition to redo the final season with different writers received more than 1.7 million signatures.

Despite that pushback, a number of “Game of Thrones” actors have defended Benioff and Weiss ― including Coster-Waldau, who said in July that it was just silly to think the two creators weren’t “the most passionate, the greatest, the most invested of all.”

Benioff and Weiss’ series also ended the night with the win for Outstanding Drama. 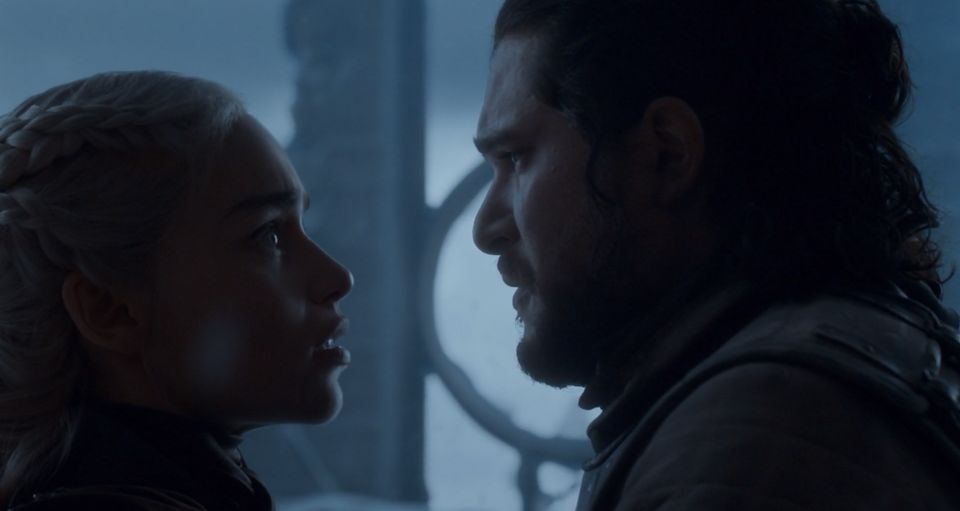 1 / 9
R.I.P. Daenerys Targaryen
The "Game of Thrones" series finale turned into the family reunion from hell when Queen Daenerys Targaryen, First of Her Name, Breaker of Chains, <a href="https://www.huffpost.com/entry/game-of-thrones-latte_n_5cd1a4f9e4b0e4d75738e5f7" target="_blank">Fan of Frappuccinos</a>, was killed by her nephew and lover, Jon Snow/Aegon Targaryen (Kit Harington).<br><br>As Ramsay Bolton (Iwan Rheon) once said, "If you think&nbsp;this&nbsp;has&nbsp;a&nbsp;happy ending,&nbsp;you haven't been paying attention."<br><br>Through almost eight seasons of the show, fans had cheered for the dragon queen as she rose from an abused, scared child to a Khaleesi set on reclaiming the Iron Throne, the birth right that was taken from her.&nbsp;<br><br>That was prior to Season 8, Episode 5, however.<br><br>There was no coming back after Daenerys torched King's Landing in the penultimate episode, seemingly unnecessarily killing thousands upon thousands of innocent people after the city had sounded its surrender bells. After that, it was only a matter of time before the bell tolled for her.<br><br>Following the destruction of King's Landing, Daenerys talked about liberating the rest of the world, and Jon just couldn't be cool with it. He told her she would always be his queen before stabbing her in the throne room with a dagger.<br><br>In the game of thrones, all men must die. But Daenerys was not a man. She was the Mother of Dragons. R.I.P.
HBO