When I met the postmodern filmmaker and painter Peter Greenaway a decade ago, he spoke vehemently about how boorish cinema has become today, focusing on telling stories while what was more interesting, he explained, was breaking apart the notion of "story" and instead exploring the multifaceted formalistic properties of cinema. Yet Greenaway's most recent film, which screened this weekend at the Istanbul Film Festival, is a story par excellence: the love story of famed Russian director Sergei Eisenstein with a handsome Mexican who happened to guide him over a ten day shoot in Mexico (funded by Upton Sinclair), a dapper guide named Palomino Cañedo who introduces him to the sensual pleasures of homo-eroticism and takes away his virginity.

It is so unusual for a Greenaway film to have a narrative story that frankly it is hard to know how to react to this sensuous tale. Are we to identify with the main character, Eisenstein, and truly care about his amorous evolution? Or are we to take the love story as a pretext to enjoy a montage of fantastic images about sex and death?

For like all Greenaway films, Eisenstein in Guanajuato stuns with its visuals. When the film starts, we see Eisenstein getting out of a vintage convertible, in black-and-white, which gradates to a pinkish color while the Russian director, stepping out of the car, shoos away flies. The screen splits into three: two screens offer close-ups of flies (and entomological lectures on fly eyesight) while the middle screen focuses on dandyish Eisenstein slamming the brilliantly white car door. Forward to a shot of an outdoor café in a bright Mexican sun, replete with folkloric locals in sombreros, while Eisenstein chats with new pals Diego Rivera and Frieda Kahlo. The climax: the camera indulges in an engrossing close-up on Eisenstein's big black boots, as a man shines them. Later, Eisenstein vomits on those same boots, spilling puke sumptuously on the shined leather.

The most splendid scenes take place on Eisenstein's enormous bed in his hotel room. Here the rain drips outside huge windows as Eisenstein and his about-to-be-lover strip and reveal their gorgeous penis-endowed bodies. The quietness of the huge room, the large bed, the dripping rain are as splendid as a walk-through installation piece. Equally stunning are the surreal shots of cadavers lined elegantly in box-like coffins, in a scene that follows, and the countless characters wearing death-masks, which culminates, at the end of the movie, in a pageant of skeletons on the Day of the Dead.

And yet these exceptional visuals are precisely the film's downfall. Interspersed with the sunny and dark images of Mexico--the bright café and the skeletal faces--are clips from Eisenstein's film on the Russian revolution. What are we to make of the connection between the revolution, Eisenstein's innovative filmmaking, the Day of the Dead and the dalliance into forbidden homosexuality?

The images do not answer. Instead, the film alternates between scenes of eros--olive oil pouring down the crack of a behind, before penetration--and scenes of death--a baby bleeding to death in the arms of the Russian director. "All cinema is about two themes," Greenaway told me. "Eros and thanatos." This rigid pattern--this pinfall--holds the story prisoner like a wrestler with two hands. From sex on the bed to revolution with guns: each is simply an inverse of the other. Meaning implodes.

Hence it is a great surprise when at one point the story becomes emotional, breaking out of its own rigid intellectual mold. "I love him," confesses Eisenstein, played masterfully (and goofily) by Finnish actor Elmer Bäck, speaking about his seducer. We suddenly understand that we are to see this homosexual relationship as something deep and real for Eisenstein, not simply an excuse for dazzling visuals and inventive tableaux of eros and thanatos.

Could there really be a story here after all?

I was lucky enough to run into "Eisenstein" in a café in the streets of Istanbul, and ask. 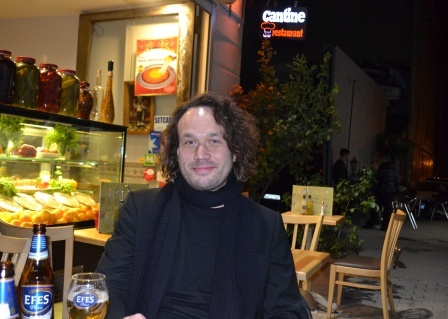 "Yes, you're right, for Peter it was special that this film was a story," actor Elmer Bäck laughed exuberantly, as naturally charismatic as the Eisenstein he plays in the film. "What made this film different for him is his personal relationship to Eisenstein, whom he reveres as a master. When I read the script, it was like reading about his best friend. It was very alive. Just like Peter is full of life! There is a lot of Peter in the character."

The actor's eyes widened with admiration as he spoke about his director, with whom he already plans to do two prequels.

"But what is it about Peter that you see in Eisenstein?" I said.

"Eisenstein is very intelligent, knowledgeable, and follows his own soul. Peter is the same. And Eisenstein is the inventor of montage! For Peter, editing is very important. For Peter, the film comes alive in the editing. The irony is that here in Mexico, Eisenstein was making a film that was never edited. 50 hours of film that he was not allowed to edit when he returned to Russia. That touched Peter a lot."

"And so the importance of that relationship for Peter was...?"

Elmer leaned forward, with the same physical warmth he has in the film, his face expressively alive. "The importance of that relationship for Peter is, I believe, that he thinks that this love affair with Palomino in 1931 changed Eisenstein. It humanized him. That's why the narrator points out that these ten days in Mexico were the ten days that changed Eisenstein! When Eisenstein went back to Russia, his next films--Alexander Nevsky and Ivan the Terrible -were different from the films he made before. Very different. They were human, warm. No longer just intellectual. Peter believes this homesexual affair in Mexico changed his art."

"Aha!" I said. "So this is the meaning of the story! But it is never mentioned in the film, is it---this enormous change that the experience in Mexico had on Eisenstein's art?