A man and a woman are sitting at a picnic table in a garden of bottles. Each bottle contains a flower.

"Tell me," the man says to the woman. "About your first experience with a man."

"My first experience with a man?" the woman smiles. "First, it was not with a man. Nor with a woman. Nor was it making love." 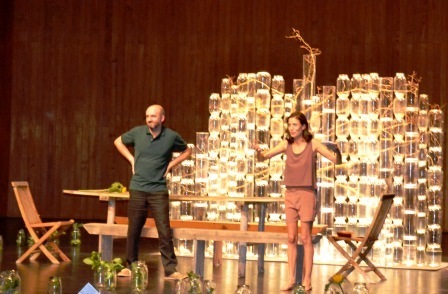 Hence begins Peter Handke's play The Beautiful Days of Aranjuez, which played this week in Lisbon, for one night only, as a special event in the Lisbon-Estoril Film Festival. Unusual for a film festival, this play -- a conversation on love, directed masterfully by Tiago Guedes -- was one of its extraordinary highlights.

For the conversation on "love" between this man and woman, in this garden deprived of all nature except the cut flowers (and a couple apples), defies all predictions. Each line is a sharp surprise. The woman tells the man -- with great animation -- about her sexual history, a history in which the actual lover is far less important than the imaginative language she uses to recreate the spaces of that love: the salt field she and her first lover crossed, the gray-white chicken poop in the grass, the wooden cabin hidden by a mulberry tree, the dried human excrement she and her first lover laid in. It is the "space" that thrilled her, the space -- as it turns out -- of the imagination. What she loved, on that long summer day of love, was the "ray of light that entered in the crack of wood."

Similarly, when the man speaks, he describes, with rapture, a "space" he once entered with great anticipation: a cabin on the grounds of a castle in Aranjuez, Spain. Here in this cabin he saw the same "light", he notes, that the woman saw on her adventure in the salt fields.

Both the man and woman go beyond the idea of union with a fellow human in their accounts of love. The lover is just a "shadow." Instead, what they relate is the experience of the senses, the longing for a peak experience, their own "hunger" and "thirst."

Ultimately -- and here lies the subtlety of the play -- their longing for love is a longing for freedom.

"Each time I made love it was revenge," says the woman.

No, she says, revenge against "the despotic omnipresent conspiracy of the everyday, which constrains the body and soul." When enjoying the pleasures of her body, "the sound of raindrops on naked skin," the woman felt she was indulging a state of being beyond historical context, "outside of the law," free from the conventions of time. She was saying no to the social order. "We were two bodies lying in the infinite night!" she claims.

Similarly, for the man, his journey in Aranjuez was to "a cabin of the past which was a residence of the future -- unlike any cabin of the present."

The actors in the play -- the renowned Portuguese thespians Isabel Abreu and João Pedro Vaz -- uttered each line carefully, with ironic weight, and moved very little on the stage, if not to change position on the bench, or toss an apple. The emphasis remained on the power of the words: on the poetics of the mind.

The imagination -- the language of poetry -- is a vehicle to freedom of the soul. 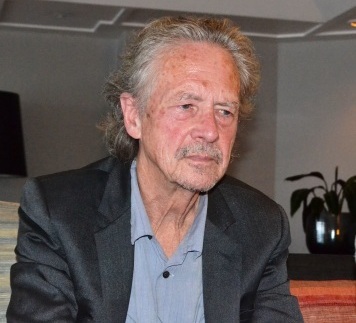 I noted this interpretation to Peter Handke later in the lounge of his hotel, facing the ocean on a rainy Lisbon day.

"My whole life, my entire work, has been dedicated to this: to liberation from history! To the imagination, to the literary. But the literary is fading today. So much contemporary literature is doubling of what is around us. The catastrophe of X will inspire a play about X. The event of Y will be made into a film about Y."

He slid his hands together to pantomime:

"So much doubling! While the literary -- the Shakespearian -- lies in the imaginary. The imagination can be more real than actual facts."

Handke mused on: "When I write, it is also freedom. A release in drama. I write plays because my nature is epic; I have a lot of people inside me."

In the play, the woman's greatest sexual union is the reverie in her own head when she was ten years old on a swing-set. She feels the presence of her family all around her--her mother, her father, her brothers, her sisters--and then suddenly, on her swing, in an epiphany, feels liberated from all them, by another "presence."

The play closed to a standing ovation. 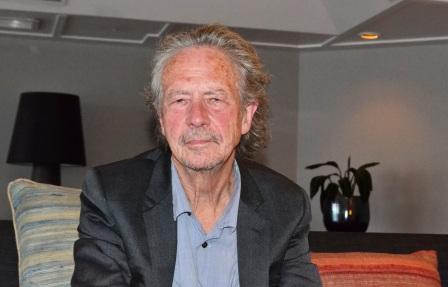 "I did not see it myself," Handke confessed.

He had been disappointed, he noted, when he had seen a previous production of his play in Germany.

"They put too much action in it," he waved his hands. "So much movement. It distracted from the words...."

"But my wife," he added. "Tells me that last night's performance was very good."