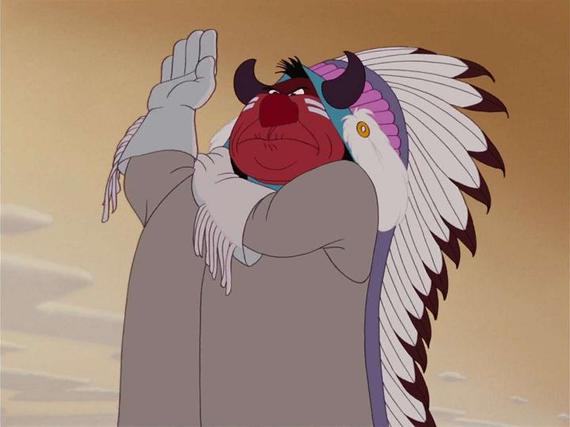 It seems trivial now. Amid the ugly roil of Ferguson, the choking brutality of our police forces, the I-can't-breath, serve-and-protect, hands-up-don't-shoot rhetoric of an increasingly angry protest movement, talking about Peter Pan seems faintly ridiculous, if not outright offensive. "Let this one go," someone told me. "There's too much else going on."

And it certainly seems that way. But the issues with NBC's recent Peter Pan Live! -- and indeed, with Peter Pan in general -- lay bare the dark heart of American racism. White America strains away from the ugly truths of Ferguson, of Sanders, of the black men shot by a police force sworn to protect them. But a beloved fairy tale? How could something so innocuous be wrong? How dare we go after the ur-childhood, the ultimate fantasy of Neverland?

Peter Pan means magic. He is adventure, imagination, pirate-fighting and adult-confounding, lost to the straightjacket of civilization. He can fly. And how many of us yearned to go with him, to take off towards first star to the right and straight on til morning? We thought lovely thoughts and never, ever said we didn't believe in fairies. We loved Peter Pan. We love Peter Pan now.

Even those who agree that America has a serious race problem don't want to face the fall of the boy who ran away the day he was born. We've lost faith in our police. Surely we can't now go after a beloved childhood classic.

Except we have to. No matter how painful, no matter how stomach-churning, white America must take a long, hard look at itself. That includes casting a light on our beloved stories: among them, Peter Pan. Yeah, there's an Indian thing in there, Princess Tiger Lily. The Disney version has a squirm-inducing song titled "What Makes the Red Man Red." But surely, while Neverland isn't exactly politically correct, it's not that kind racist. Right?

Well, considering that the stage play has Chief Great Big Little Panther saying to Peter that, "You Great White Father," yes, it is racist. And while the fantasy has long been protected by its intentions -- the Indians are portrayed through the eyes of a child -- it's time to confront the deep-seated problems with the story itself and even with modern portrayals.

This eyes-of-a-child excuse is the first problem. In a land of childish savages, of civilization rejected, the Indians are the most degenerate. Even the children treat them as other, and even the (all-white) children are superior to them. They speak in gibberish -- ugg-a-wugg-a-wigwam, which the NBC production augments with actual Native American phrases -- degenerated to gibberish.

And they are just "Indians" (though orginally, at least in Peter and Wendy, Barrie calls the tribe the "Piccaninny Indians," which, seriously -- whoa.) "Indians" is enforced as a catch-all culture of feathers and loincloths and teepees, of wigwams and tomahawks. They fight the white kids, who save the flower of their tribe from the evil pirates. 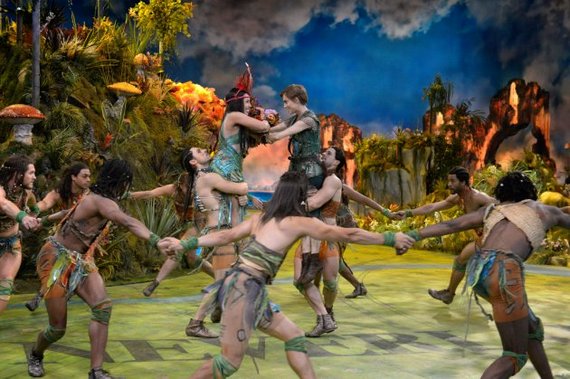 Lumping all American Indians together as one monolithic caricature is grossly offensive, because these are real people, with many, many different cultures. American Indians exist not in the dim past, not in a white fantasy land, but in the real world, on the reservations we herded them onto. Their portrayal is the American Indian equivalent of blackface.

Even the most hardened among us (usually) deplore blackface: it reduces blacks to a subservient caricature. Neverland's Indians accomplish the same. We wouldn't let our children to watch blackface. So why do we show them native peoples as feather-clad tomahawk wielders?

NBC tried to divert the racial issues by Tiger Lily's casting: she's played by an actress with (some) Cherokee background. Bully for her. It doesn't change that the character's name is Tiger Lily. American Indians don't have tigers. And they don't need a white kid to save them.

These issues lie at the heart of American racism. We give them a pass. We build up stereotypes of sub-par people of color early on in life; we resist questioning them. We might cringe a bit. But we don't want to give them up: we love Peter. Calling out the racism in Peter Pan would mean losing him, somehow, and we don't want that.

We value a childhood story more than the respect of an entire people -- a people whose subjugation continually benefits us. Live in America? That land once belonged to the caricatures on your TV screen. Our political ancestors raped, killed, pillaged, burned, marched, and stole from them. We built our country on their backs. Even now, we're raping their ancestral lands for profit. These facts matter. And so our portrayal of American Indians matters.

And we must confront it.