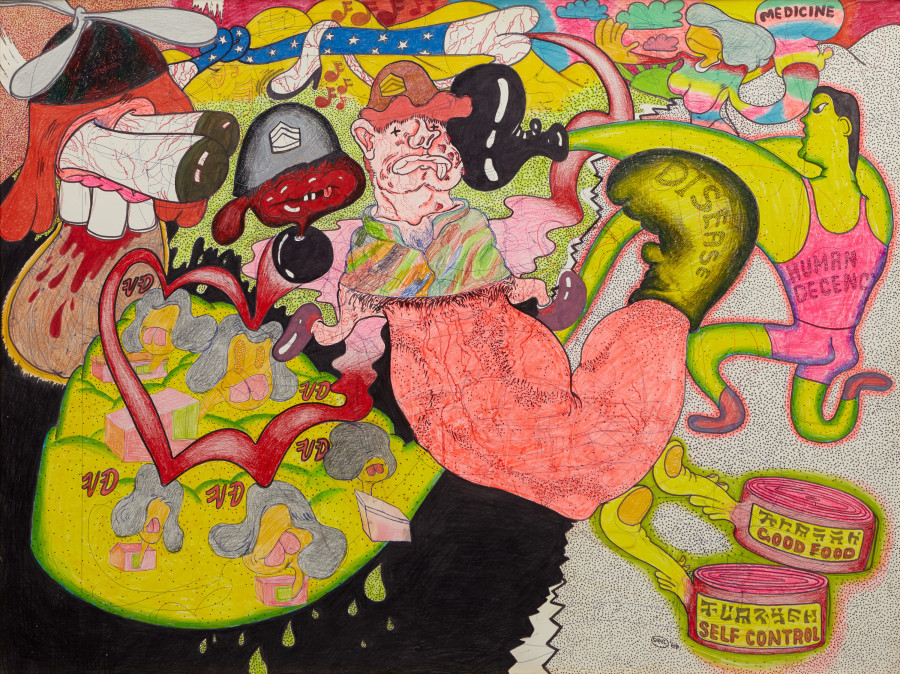 Peter Saul may be 80 years old, but inside he feels like a 14-year-old boy. Since the 1950s, Saul has offended, grossed out and entranced the art world with his neon infused, cartoon snarls, jam-packed with gore, psychosexual mumbo jumbo and all kinds of visual excess. If pubescent Picasso read one too many tabloids and was doodling in detention, you'd see quite the resemblance.

Saul was born in San Francisco in 1934. His father worked for Shell Oil, his mother was a secretary. He became interested in art at an early age, drawing inspiration from cartoons as well as his boyish obsessions with "war and chaos and murder." He attended art school at the California School of Fine Arts and Washington University in St. Louis, and later moved from Europe to San Francisco to Chicago to Austin to New York -- where he lives now with his wife.

His flagrant subject matter treats the viewers' eyes like blisters to be popped, with heated content ranging from Angela Davis' crucifixion to O.J. Simpson's execution by electric chair. His works can teeter on the verge of racism or misogyny, but, as Saul explains, the artworks don't reflect the artist's own beliefs -- he doesn't have any. Rather, they take a life of their own, offending whoever is wound up enough to care. "There’s a tremendous need to not be seen as racist, not seen as sexist," Saul told Holland Cotter in 2008. "So I want to make sure I am seen as those things."

A series of Saul's work from the 1960s and '70s will go on view next week in an exhibition titled "From Pop to Punk" at New York's Venus Over Manhattan. The Day-Glo visions occupy a moral grey zone, with social commentary buckled and skewed until it's nearly unrecognizable. Today, many artists share Saul's love of the puerile and grotesque, from '90s bad boys like Mike Kelley and Raymond Pettibon to emerging contemporary artists like Jamian Juliano-Villani and Rebecca Morgan.

But Saul, and his love of fluid bodies and bodily fluids, came first.

We reached out to the artist to learn more... 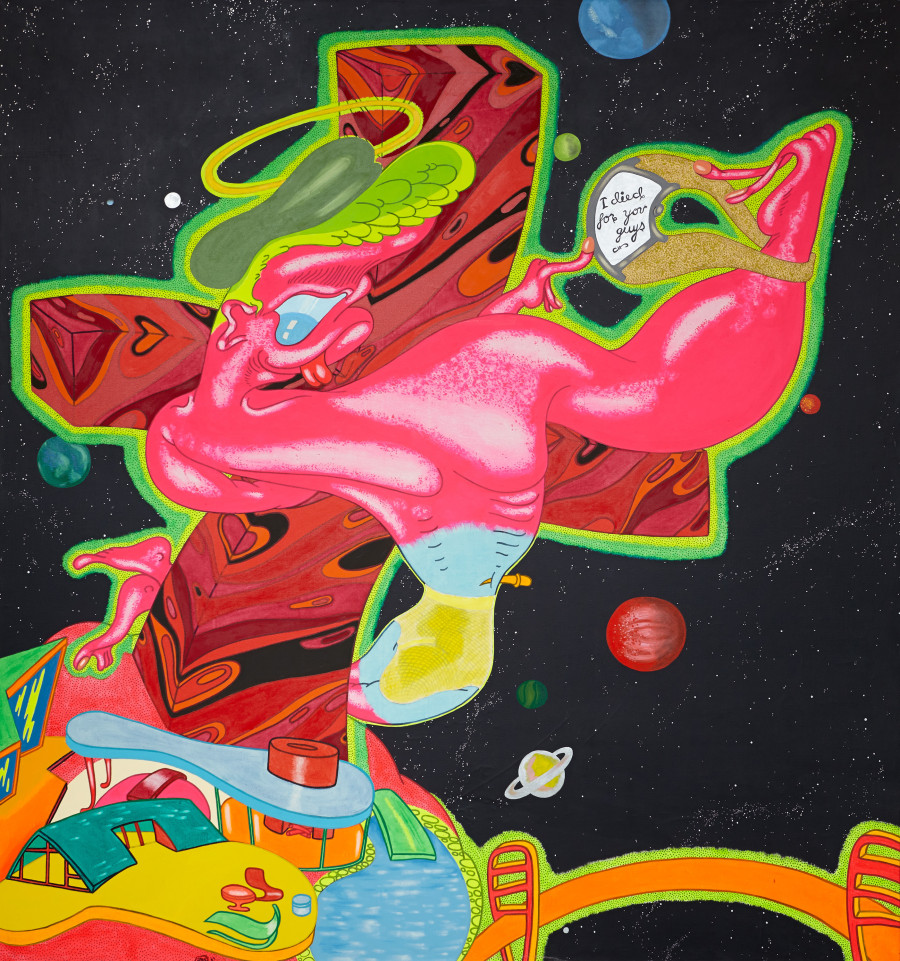 How does it feel returning to your work from the '60s and '70s after all this time?

Actually, all this work was shown in New York City around the time I made it.

And how does it feel looking back?

Well, I don't know yet (laughs). When I showed the work at that time, the spirit of the time, the zeitgeist, was to imply no attention to any content, but just to judge the picture in terms of its technique. Thick paint, thin paint, stuff like that. It's going to be different this time because these pictures are full of content.

Do you think now both style and content are equally appreciated and evaluated?

Yes, yes. Much more so. Those days were very rigid. The art appreciation in 1966 was very rigid. Now it's much more flexible. I'm very pleased with the way things have turned out and am looking forward to seeing my pictures.

Your work was recently shown alongside Susan Te Kahurangi King's work at the Outsider Art Fair. Can you talk about that?

It's true I'm an outsider, but mainly that's my opinion. So I'm not sure I should have been there.

Overall, how do you think the art world has changed from the time you created these works to when they're showing now?

Today's masterpiece could become tomorrow's piece of junk. The only thing separating it from a piece of junk is the opinion, the profound and well-educated opinion of a few important people. They might get hit by a car, they might change their mind, who knows what's going to happen?

I like to see things. I see a lot more art than I'd like to see. We have to be polite and see the art shows of people we know. We see a lot of art. A mistake I've made is I have not worried sufficiently about the art world, really. I have not concerned myself with the other people in the art world. I've been a little too singular and that's a mistake I've made. But everybody makes a mistake of some kind and if that's my only mistake, I'm happy.

So can you talk a little about some of the works on view this year?

The whole thing is my imagination, that's the first thing you need to understand. I made it up. That's not commonplace in visual arts. You would think it would be, but it's not. I just imagine the war, I've never been to war. Have no experience to back it up whatsoever. I've never handled a gun. Never been in the military. Likewise, with a lot of those psychosexual portraits, I have no experience to back it up. I've been married twice, the current time for almost a half century.

So basically, this is just an imaginative thing I felt like doing. And I think the reason I felt like doing it, and what put a lot of force into it, was that art was going in the other direction and I wanted my art to not go in that direction. It was too formal, too dead, too technical. I wanted my art to be more like a movie. And also, of course, I have a style that makes good use of psychology. I really lay it on. 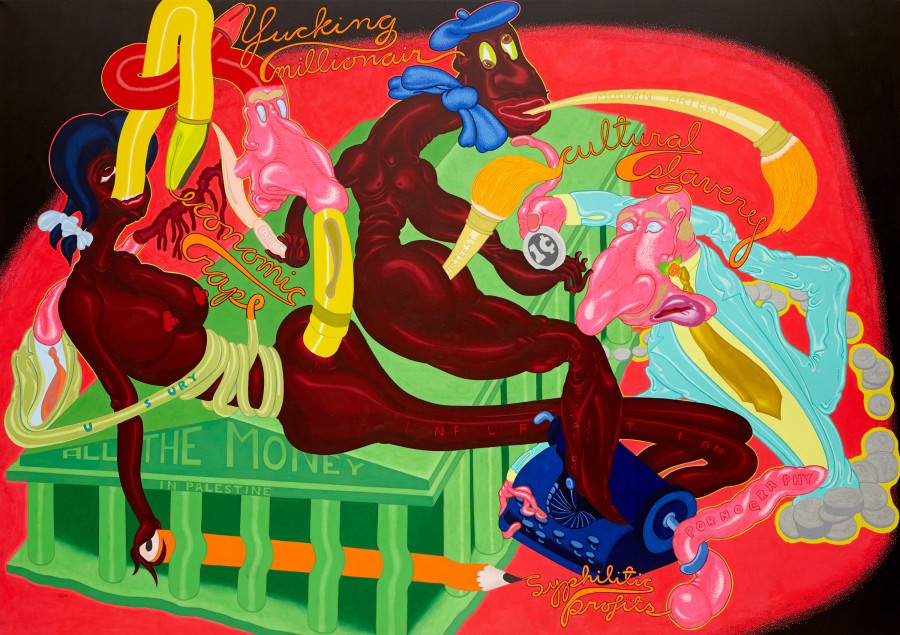 Do you think your artwork has had an influence on the current popularity of bad taste in art?

So I'm told! I'm told I have an influence, but I never know about that because I spend my days by myself. My wife and I have a studio up here in the country and we just hang out there so I don't know. We go to openings sometimes and I meet young artists but they all roll together into one big person and I have a hard time distinguishing one from another. I don't know what to say about my effect on the art world. I hope I have some, but you never know for certain.

You also mentioned in a previous interview that you were still pretending to be a rebellious youth at 75. At 80, how are you feeling now?

I think it keeps you in good shape. It's not that I'm pretending to be rebellious, I just think it's a romantic role to play in art. Who would want to play any other role? Any other role would be academic by definition. I try to be rebellious as long as there's no danger. In art there's no danger. It's not like you're jumping out of an airplane without wearing a parachute. There is no danger in art. You just do it. You stand there, you make it up.

Do you still feel like there is no danger in art following the recent Charlie Hebdo attack?

I use my imagination a lot and I feel in the position of a 14-year-old kid who has just seen a war movie and suddenly decides to write a war novel as a result. Except I think I can do it a little more convincingly. I like it best when two ideas collide -- like when you have a crazed attitude towards women combined with a crazed attitude towards the Vietnamese. I like that. Even if it's not true, I don't care whether it's true or false. I just do it.

Do you make art with your children?

Yes, I have three kids and they're all good cartoonists. You have to do something in the restaurant while you're waiting for the food to be served. So you start early and five years later, they're pretty good. 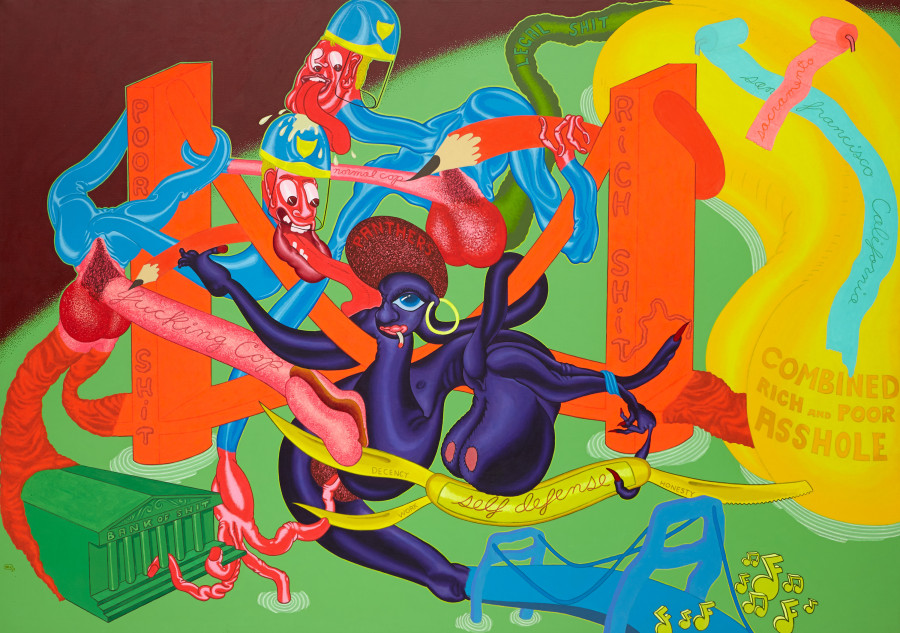 Do you think growing up in San Francisco had any influence on your aversion to political correctness or political beliefs?

Perhaps it did. I did grow up there, but the meaningful time I had there was 1964 to 1973. I never used drugs beyond marijuana four or five times -- I was talked into it, I didn't enjoy it very much -- but drugs were a huge subject for people to think about. I took note of that, put it in my pictures. And I also put in the kind of psychology that was going on. In Marin County, Mill Valley, everybody was undergoing psychic change, it seemed. I couldn't help but make use of that, even though I personally didn't go through any psychic change -- I don't think. I just mixed the whole thing up with politics.

My actual politics are just left. I try to vote as left as I can. I hope that my paintings will coincide and be far left, but frequently they're not. Frequently the painting rebels and goes fascist on me. I don't mind! I don't mind! The painting is made up and has a life of its own. I think it up and I put it there and that's it.

Can you describe the experience of an artwork rebelling against you?

Well, I kind of regret it but I don't make any attempt to correct it. It might be hard to sell. All these pictures in the show come from the collection of one man, an art dealer. He supported me for 37 years. He bought the work directly from me. So I guess you could say he was an enabler, to say the least! He even is in a couple of the pictures, on a psychosexual level. But he only showed up like one day a year, so I didn't get to know him very well.

Saul's "From Pop to Punk" runs from February 25 until April 18 at Venus Over Manhattan in New York. See a preview below.