"There is a recurring theme....that tricksters might help someone see into the heart of things, and that they therefore have a touch of the prophet about them."
-Lewis Hyde, Trickster Makes This World

The paintings of Peter Williams, currently at Foxy Production, are, in no particular order, hallucinogenic, acerbic, pained, beautiful, confessional, obsessive, critical, jarring, wild, weird and profoundly human. They are born from Williams' experiences of race, appetite and physical vulnerability. The visual lexicon is a heady blend of psychedelic color, abstract pattern, and cartoon-manic imagery. The five large untitled paintings in the front gallery are figurative while the three semi-abstract pieces in the back gallery are can be seen as condensation of Williams' language and iconography. I would argue that the underlying archetypal quality of these painting is that of Trickster in that they dissemble with humor while addressing painful or difficult subject matter. Some of the qualities that Lewis Hyde, in his book Trickster Makes This World, attributes to Trickster characters and stories are, blurred, unfixed, or malleable boundaries and theft and appetite as creative opportunity. I want to make clear that I'm not calling Williams the man a trickster, but positing that he accesses and channels that energy as a way to shed light on realities that get simplified, distorted or misunderstood when looked at directly. 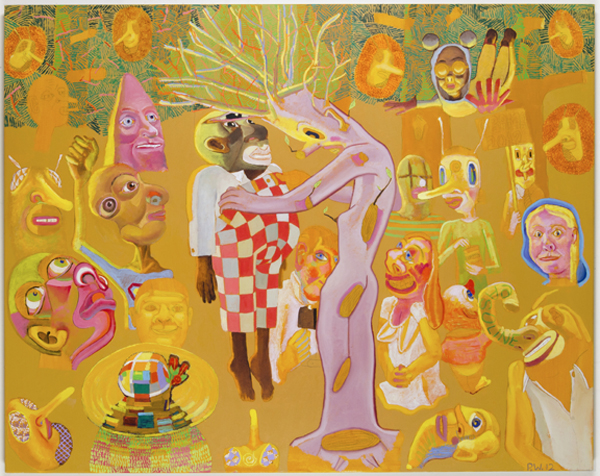 "Untitled", 2012, contains the most overt reference to racist violence and stereotype of these pieces. Against a yellow-ochre field, a lavender colored anthropomorphic tree holds aloft a boy in minstrel-checkered overalls. The boy is black, but his mouth is white, recalling the egregious racism of blackface actors, but also speaking, as it were, to Williams' experience of meeting people he has spoken with on the phone only to have them not believe he could be Peter Williams; they assumed he was white. A white boy, half-hiding behind the lynch-tree, with a partially eaten ice cream bar; chocolate on the outside and vanilla on the inside, like the 'Oreo' slur, further suggests the tyranny of racial stereotype. The rest of the canvas is filled with a dizzying array of grotesque and often smiling half-figures and disembodied heads. Williams informed me that he was halfway through the painting before he realized that the way the surrounding figures were facing out of the canvas was like the notorious photographs of lynchings, in which the crowd of whites turn to look at the camera. Joining the 'little things' of everyday racism with the horrors we collectively like to think of as behind us, Williams exposes the lie that we are 'over it'. 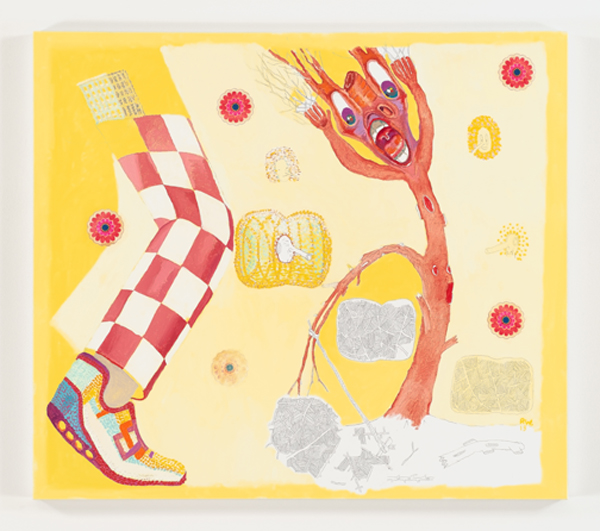 The minstrel and lynching motifs appear again in "Untitled", 2013, as a leg in minstrel pants faces off against another tree, screaming this time, its branch dragged down by a rope attached to, hovering over, or buried in the ground. The face of the tree, in a hilarious act of creative theft, is lifted directly from an old King Crimson album cover, underlining the trippy aspects of the work, but with a palpable existential terror. The disembodied leg suggests a personal dimension for Williams, who, as a young man, lost his leg following a car accident in which the driver intentionally drove off a cliff. On another level though, the leg in this painting is another example of how these paintings express Trickster-ish qualities. Throughout mythology, Trickster figures endure horrible physical difficulties, but turn them to creative opportunity. Continuing the Trickster theme; another album cover riff is the image, repeated in several of the canvases, of long nosed figures reminiscent of Sir Nose d'voidoffunk, (who was unfunky), as seen on the old Parliament album, Trompibulation. Some of the noses are emblazoned with 'Gasoline' suggesting appetite, substance dependency and corporate ubiquity as a modern perpetration. Corporate food and drink imagery has appeared throughout Williams' oeuvre often with a malevolent and threatening overtone. In the ochre lynching picture, for example, one of the crowd, an alien-looking figure, blithely devours a bag of Doritos as if it were movie popcorn. In Trickster stories controlling appetite is frequently a source of difficulty, no less so in these paintings. In "Untitled", 2013, a figure looking quite a bit like Williams, simultaneously plucks and holds a bouquet of flowers, while floating upside down with a hapless expression. On each side of him are two bizarre fetish-like female figures. The impression is of an inversion of the traditional heroic, Heraldic imagery of the Ancient Near East cultures. Whereas traditional heraldic imagery was understood as man's power over nature, here the hero of our story is at a complete loss in the face of natural, sexual desire as the feminine. 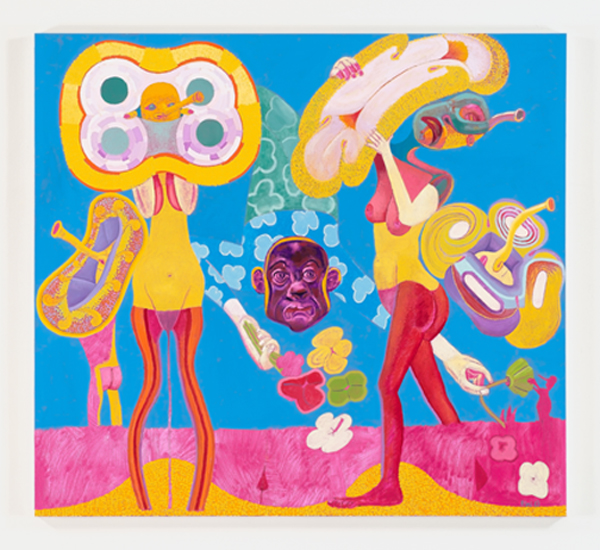 The beauty of these paintings is that they never fall into finger pointing or polemical politics, which tend to either preach to the converted, fall on deaf ears or let the complacent, liberal, art-world viewer off the hook. Through playful form, seductive color and an apparently populist cartoonyness, Williams invites us to live with uncomfortable, unanswerable questions. The entire show is reminiscent of Wily E Coyote, Trickster again, getting repeatedly flattened and blown up for all his efforts. The personal dimension of these paintings reminds us, we may want to believe, having twice elected a black man as president, that we've graduated; but let's not kid ourselves.