After college in Ohio, I moved to New York where I actually met Peter. After founding Orphans International Worldwide (OIWW) in 1999 to help raise global citizens in the developing world, Peter agreed to help our efforts.

He held a benefit performance for us -- his "PBS special" -- years ago in his own home on Central Park, another large concert after the earthquake in Haiti, then last week at Marietta College. This was his fourth benefit concert for our kids in Indonesia, Sri Lanka, Haiti, India - even Nepal. 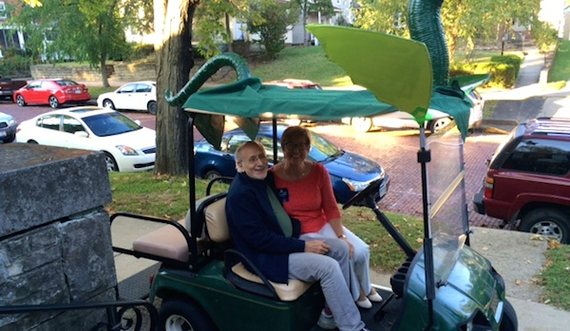 In the wake of Mary Traver's passing, Peter asked himself, "How can we make sure the legacy of Peter, Paul & Mary endures?" Partly, the trio's continued presence is assured simply because people's lives have been touched and shaped by the trio's music. Remarkably, four generations of children have now grown up listening to, and loving, this group.

With great conviction, Peter has assigned himself a special role to "carry on" the trio's tradition. Folk music is less popular today than when I was a kid, but Peter's songs call across the decades. 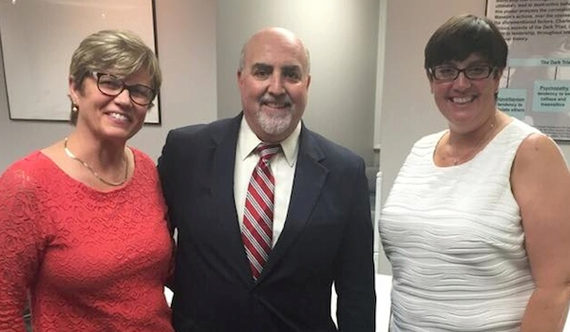 I asked Peter why he toured the world singing - and why he came to Marietta College. He told me:

Performing at Marietta College is just an extension of what I did with Peter, Paul & Mary. Singing those songs to the students that told about the Civil Rights movement and the Peace movement was a gift to me, allowing me to feel the spirit of the time that was so hopeful and so idealistic. That's part of the work of Operation Respect.

His million-selling illustrated children's book and CD of Puff, The Magic Dragon has given him a new platform -- created a new path -- for folk music to occupy the limelight once again. No other folk singer/activist that I know of has sold a million copies of anything recently.

Over his half-century career, Peter has reached out -- live -- to over a half a million of what he affectionately calls 'co-advocates of positive change.' The inevitable presence of good people at his performances, such as at Marietta College, make for a remarkably moving, historic event. 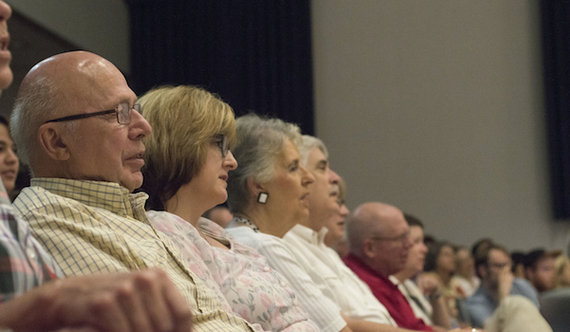 I am proud of my own Foundation's partnership with Marietta College, and in my introduction of Peter, I called on our newly appointed Luce Fellows here to study and know backwards and forwards Peter's involvement in social justice - because to know that is to know the history of American social justice over the last fifty years.

Peter graduated second in his class from New York's High School of Music and Art -- the "Fame" school. He went on to graduate from Cornell with a BA in psychology in 1959. 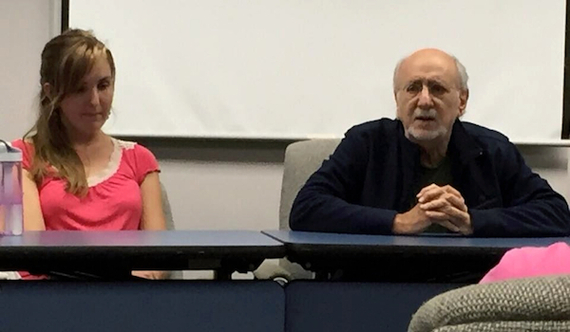 Peter began singing with Paul and Mary in the West Village, debuting in 1961 at The Bitter End. They rapidly developed a following - and signed a contract with Warner Brothers, releasing Lemon Tree in 1962, followed by Pete Seeger's If I Had a Hammer.

The trio's first album, Peter, Paul & Mary, remained in the top ten for ten months, in the top twenty for two years - and sold more than two million copies. In 1963, they released Bob Dylan's Blowin' in the Wind - which sold another million copies. 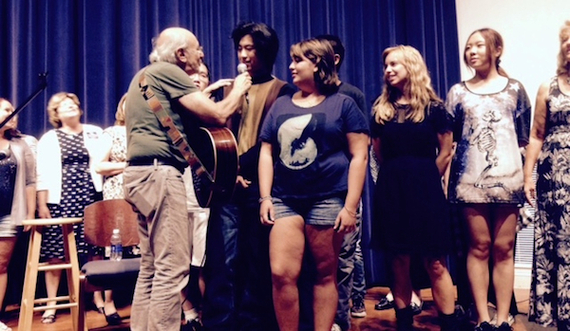 Peter educates a new generation on the importance of singing
together to create the sense of community necessary for social change.
Credit: Marietta College/Diane Bruno.

That same year, Peter, Paul & Mary appeared on stage with Martin Luther King at the historic March on Washington - where they sang Blowin' in the Wind, establishing it as a Civil Rights anthem.

Peter, of course, wrote many of the group's best known songs, including Puff, Day is Done, The Great Mandala - and one of my favorites, Light One Candle. 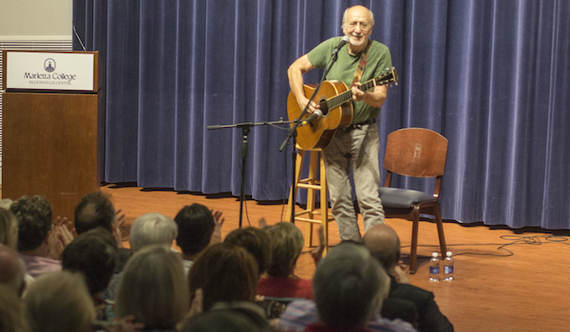 As their fame grew, the trio mixed music with political and social activism more and more. They marched with Dr. King in Selma. They demonstrated against the Vietnam War. They sang to a half-million people at the 1969 anti-war March on Washington.

Over the years, he performed at John Kerry's wedding, campaigned to free Soviet Jewry, visited Arabic schools in Israel, supported presidential campaigns from Eugene McCarthy to Barack Obama - as well as played for the Occupy Wall Street demonstrators. 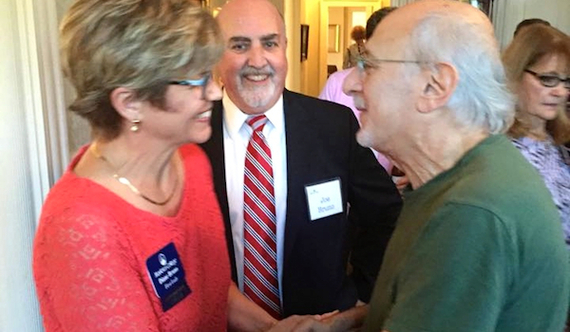 In 2000, to counter childhood bullying, Peter helped found Operation Respect, a nonprofit that brings to kids -- in schools and camps -- through a curriculum of tolerance and respect for each others differences. The project began when Peter heard the song Don't Laugh At Me - and realized the song could become an anthem of a movement to help children find their common sensitivity - to the painful effects of intolerance, ridicule, and bullying.

The president and C.E.O. of Operation Respect, my new friend Molly McCloskey, spent last week on the campus of Marietta College, working with its Education Department as well as administrators and teachers from local schools. I foresee a strong, lasting relationship growing there. 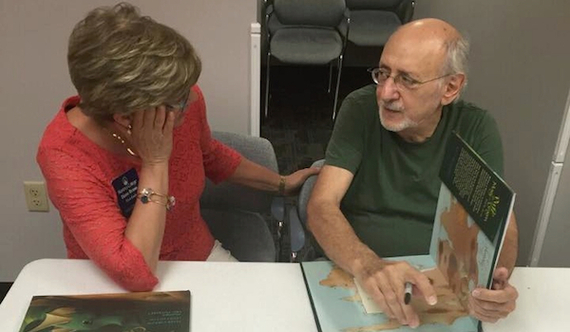 Peter told me the reason he is so passionate and dedicated to Operation Respect:

On behalf of Operation Respect, Peter has performed from Hong Kong and Vietnam to Croatia, South Africa, Egypt, and Argentina. The program has been presented to more than ten million children. In some form, the project has reached nearly one third of all elementary and middle schools in America--at least 20,000 schools in all. 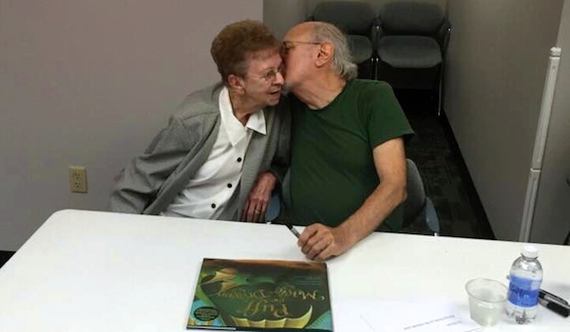 Peter with an adoring fan who told me, "I have never been treated
like that anywhere ever, in my life. He is a genuine, loving soul."
Credit: J. Luce Foundation/Bill Bauer.

Peter's music and songs resonate with a history that he and his musical partners Mary and Paul not only helped to write - but one that has changed and inspired millions to continue to 'keep on keepin' on,' hold firm to principle, and not be deterred in the face of adversity. His performances create an environment where a sense of reassuring commonality is shared, at a time when society is deeply concerned for our welfare and future.

Marietta College, which hosted Peter's visit, is the engine of culture and diversity in Southeastern Ohio and the Mid-Ohio Valley. Located in the breathtaking foothills of the Appalachians at the confluence of the Ohio and Muskingum Rivers, the college has long been a part of this first capital of the Northwest Territories, Marietta. 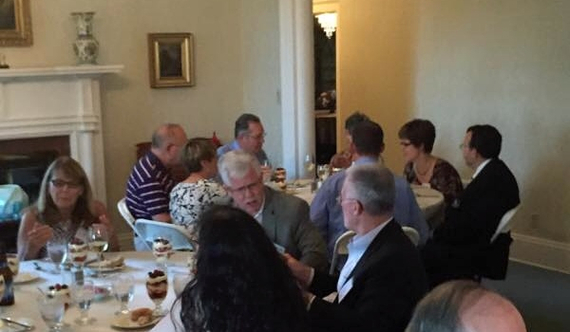 Dinner in honor of Peter Yarrow in the home of the president and
first lady of Marietta College. Credit: J. Luce Foundation/Bill Bauer.

Its president and first lady, Dr. Joseph and Diane Bruno, warmly welcomed Peter and friends into the President's Home for a grand dinner. This home that Peter admired greatly was built in 1822 and is today listed on the Historic Register. Dean and Provost Dr. Janet Bland also attended, as did Dr. Gama Perruci, Dean of the McDonough Leadership Program, and Dr. William Bauer, a McCoy Professor of Education and Leadership at Marietta College and vice president of the J. Luce Foundation, as well as head of The Bauer Fund launched in memory of his son. 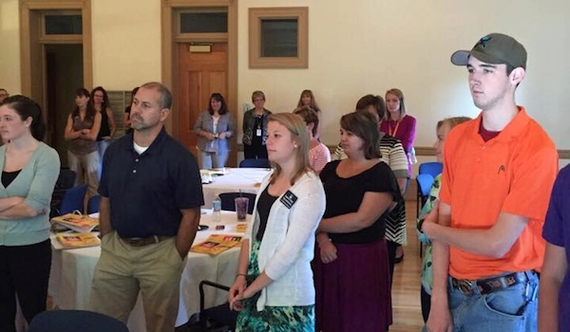 For many Marietta College students, Peter's campus visit was an
introduction to the 1960's. Credit: Luce Foundation/Bill Bauer.

Bill Bauer explained why so many found Peter's performance and visit so moving:

Marietta College and the greater Marietta area were treated to something larger than Peter's presence. He allowed several generations of people to join together to forget the mundane of day-to-day concerns and be present in the moment. It was a very spiritual concert that allowed the audience to actively feel a role in this memorable event. Marietta College was truly blessed by his appearance and glowing persona. 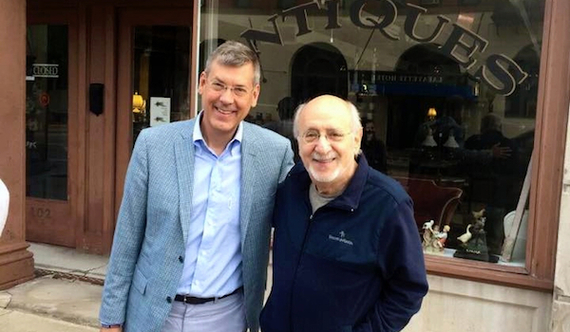 The author with his favorite mentor. Credit: Luce Foundation/Bill Bauer.

Peter Yarrow has been awarded by many, many organizations as well as the U.S. Congress. In 2005, Orphans International Worldwide awarded Peter with our own Humanitarian of the Year Award.

An unabashed liberal, a friend, a mentor - and a Mensch, it brought me great joy and deep honor to introduce at Marietta College the legendary Peter Yarrow!

With Molly McCloskey and Bill Bauer.