WASHINGTON -- Gay rights supporters have been working to change the definition of marriage for years, trying to get legislatures to pass marriage equality laws and securing more rights for same-sex couples. But New Hampshire resident Mike Raven is looking at the issue more literally: He wants to convince dictionaries to print a more inclusive definition of the word "marriage."

Raven was inspired to start a petition on Change.org after seeing how upset his twin sister, who is a lesbian, was in response to North Carolina's passage of a constitutional ban on marriage equality.

"If this whole argument comes down to an intangible definition of marriage, then it's time for that definition to change," he wrote on his petition. "While we cannot change the oppressive and discriminatory way that some religions continue to define marriage, we can go to an even better place. I believe it is time to correct the definition of Marriage at our sources for what words mean: dictionaries."

Indeed, many Americans still turn to dictionaries to give them the definitive meaning of a word. On C-SPAN's "Washington Journal" last week, a man named "Alex" called in and quoted from the dictionary in an attempt to put to rest the debate over same-sex marriage.

"When I was going to school, if you did not know the meaning of something, the teacher would tell you, 'Go look it up in the dictionary.' So evidently, nobody has bothered to read the dictionary," he said. "So let me just quote here in the dictionary. It says, 'Marry: join as husband and wife, take as husband or wife, take a husband or a wife. And marriage is the state of being married; act of marrying.' ... Now, are we going to rewrite the whole dictionary and everything here? Why don't we end this silly conversation and get on with the problems that we really have?"

He believes marriage is "two consenting adults, entering into a life-long relationship as husband and wife, husband and husband, or wife and wife, based on love and commitment."

The top entry for "marriage" on Dictionary.com, however, defines marriage as being between one man and one woman: 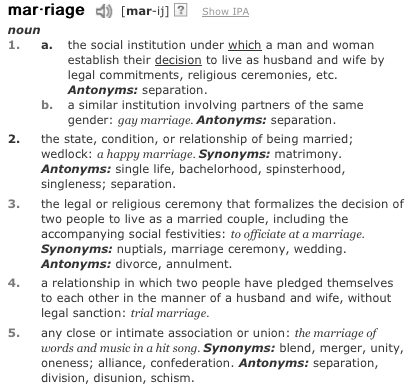 While there is a concession to same-sex unions in the second part of the first definition, for Raven, that's not enough. In an interview with The Huffington Post on Tuesday, he described the arrangement as "separate but equal, but not even."

In a statement to The Huffington Post, Dictionary.com gave no indication that it was going to change its "marriage" definition at this time.

We recognize that the word marriage is at the center of nationwide debate. As we continually seek the best way to convey how all words are being used in multiple contexts, we appreciate all suggestions regarding the description of the current semantic status of "marriage," and constantly strive to marry the multifaceted strands in a way that is as comprehensive as possible. As the first dictionary born digital, we are able to closely monitor and continually evolve word definitions to reflect their most current meanings. We refer you to our definition page for the word marriage, including detailed discussion of its origins, the many ways it is used and various definitions.

Merriam-Webster has a similar definition of "marriage." When one googles "definition of marriage," the definition that pops up has no acknowledgement of same-sex unions at all.

At the federal level, marriage between two individuals of the same sex is still not recognized. But in six states and the District of Columbia, the dictionary definition of marriage is not accurate. Three other state legislatures have passed marriage equality bills that have not yet taken effect.

Raven is halfway to his goal to securing 10,000 signatures. He said that he's been heartened by the reaction he's received to his effort, although some have criticized him for not thinking big enough.

"Sometimes if you think small, big things can happen," he responded.