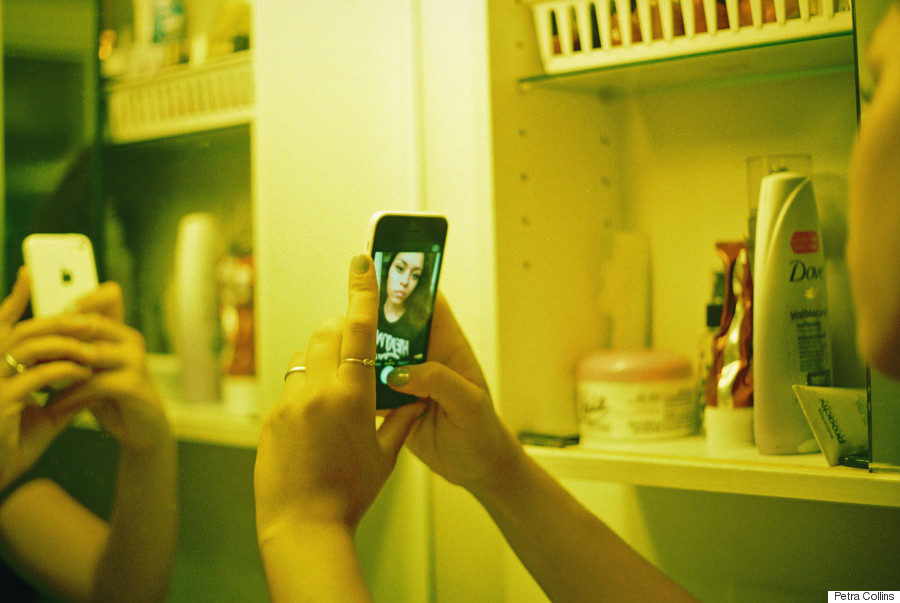 A Google Image search for “babe” yields unsurprising results: an endless scroll of women who look both young and fertile. Their faces, poses and outfits are so without difference that it’d be easy to believe in the illusion the collection of images creates: that youthful, sexual women are everywhere, and that all other women are, or deserve to be, invisible.

Petra Collins -- a 22-year-old photographer, filmmaker, and now editor of Babe, a collection of art by, for and about teen girls -- is aiming to change this conversation.

“There’s definitely a romanticism of youth, like, everywhere,” she told The Huffington Post. “Specifically with women, they kind of only exist between the age of 15 to 25.”

Ripping through the plastic sheen we wrap around female subjects, Collins’ collection showcases period blood seeping through underwear, beauty products spilling haphazardly from shelves, gloopy lotion piling up on smooth skin, pubic hair poking through baggy underwear. She doesn’t ignore the idealized way we tend to picture women. The gunky reality of the products we buy and use to perfect our appearances is a recurring motif, but so are glitter, boy bands, and childlike crush collages.

And, there are loads of selfies. Flipping through Babe is like scrolling listlessly through an Instagram feed. At first glance, the images are commonplace, offhand snapshots of girls and women discovering and displaying their sexuality. But a closer look at the framing of Petra and her peers’ portraits shows the edifying import of her work, which is a much-needed, honest portrayal of how young women view and present themselves.

In Collins’s own photos from the book, girls peer into their bathroom mirrors, and, simultaneously, into their iPhones, tilted downwards at flattering angles. Toothpaste, lotions and stained mirrors frame the selfie-taking girls at the center of her images -- the viewer is able to see not only the refined, filtered (or #nofilter-ed) public-facing image, and also the reality that surrounds it. 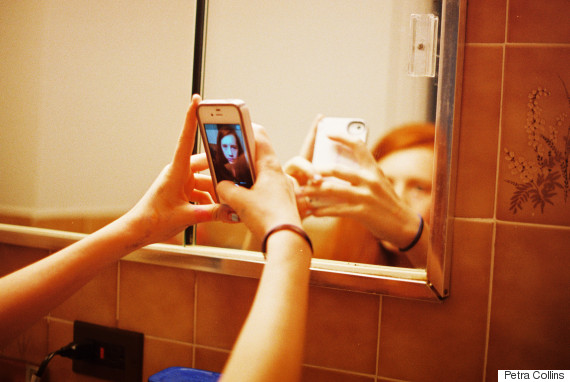 Collins’s eye is discerning without being judgmental. In her selfie portraits, she neither condones nor celebrates the act of self-love. Her images seems to admit that, as a woman, taking a selfie isn’t necessarily the result of narcissism or even self-respect. It is often a performance -- a scene put on for the watchful male gaze. And while the performance may be empowering to some, it’s a restrictive means of discovering one’s sexuality, and can stifle young women’s desires, especially those that fall outside of conventional desirability.

Collins, who began taking pictures at 16 to combat her troubles at school and with self-esteem, admits that she struggles with toeing the line between sexual exploration and sexual exploitation. To rid an image or film completely of its X-rated components is to ignore a vital element of teenagehood. To focus only on the gritty is to deny that we apply a sheen of fantasy to sex, for better or for worse.

“I really wanted to feel strong, I wanted my subjects to feel strong, but I didn’t know how to do that,” Collins said of her first forays into photography and film. “It’s really hard for, I guess, every woman to not internalize misogyny. I just learned as I went on how to best capture my subjects without objectifying them.”

Collins connects her own constant exposure to representations of women on film (particularly the ones that don’t paint a complete picture of womanhood) to the personal insecurities she still harbors. She speaks about the lamentable lack of female directors in Hollywood -- fewer than 5 percent -- and claims that because most representations of womanhood are conceived through the eyes of men, it’s difficult to see herself as anything but ancillary.

“If your story is being told by someone who doesn’t really know it, it’s not going to come out accurate,” Collins said. “A lot of it has to do with context. Whoever’s behind the camera or pen or whatever. It’s also, if we’re documenting women or girls, having them as subjects rather than objects. Really treating them as, like, human beings. And capturing them in a multifaceted way, not just on one level.”

Michele Schreiber, Associate Professor of Film and Media Studies at Emory University, echoes the sentiment, explaining that a lack of women behind the camera has lent to an incomplete narrative of girlhood. While she commends the honest representation of teens presented by filmmakers such as Larry Clark, whose dark 1995 film "Kids" strays from “the upbeat or optimistic endings of Hollywood films,” she believes the physical and emotional experience of feminine events such as puberty are best captured by women. And, photography -- a more accessible medium with a rapidly growing audience thanks to platforms like Instagram -- might be the best way to accomplish that.

“A photograph can take on a life and narrative of its own in the mind of every viewer. This introduces a wider spectrum of possible interpretations of images, which may result in a more complex rendering of the teen experience than Hollywood films are able to offer,” Schreiber said in an interview. “Women's lives consist of sensations and emotions that don’t abide by a neat three-act structure and it is exciting to see a broader spectrum of portrayals that show this messy, unpleasant, and unglamorous side of womanhood.”

Among those using photography to escape the male gaze is Claire Milbrath, who in the past helmed a project called "Groin Gazin," which, wonderfully, is exactly what it sounds like. Taken from the perspective of a woman, the images angle downwards towards male erections, turning the concept of objectification on its (haha) head. 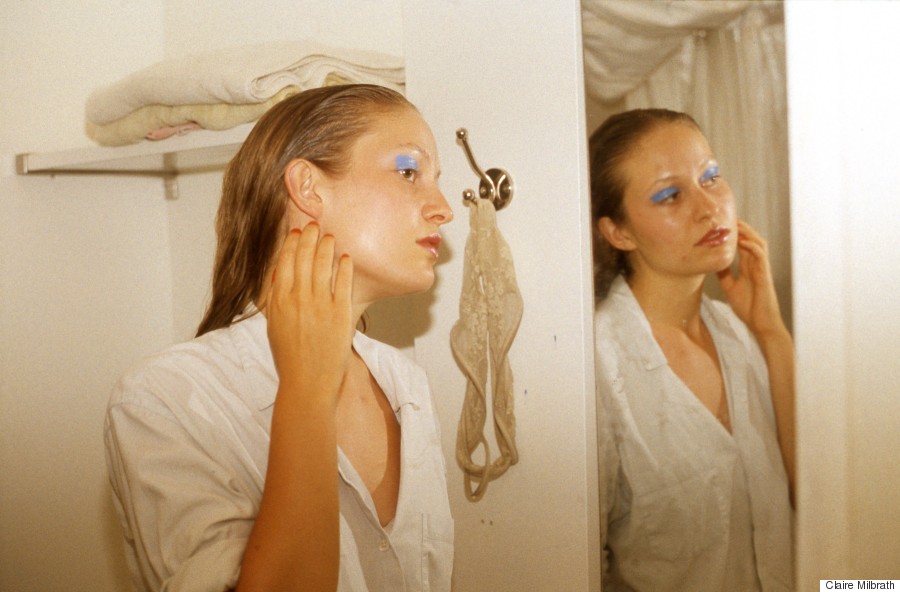 One of Milbrath’s self-portraits, which is featured in Babe, aligns with the aesthetic and themes of Collins’s selfie photos. Milbrath gazes apprehensively at herself in a full-length mirror, a manicured hand against her neck. She seems to be lost in thought, considering the angle of her pose. She’s both self-critical and serene. She’s performing for herself and for others; her blue eye shadow is irreverent but flattering, her dirty underwear hangs daintily on a hook.

"Honestly, I don't think I've been able to remove myself from [patriarchal] beauty standards," Milbrath said. But, she does her best to subvert them through her work. "I think it's in the small details," she continued. "I try to make the men seem meek or vulnerable. The woman is often in control."

Her Instagram feed has a similar vibe. A selfie with choppy hair and a purple hickey got 500 likes. Another of her applying lipstick and with a caption shouting out to her pal Petra did, too. The sense of community between the women anthologized in Babe is apparent, and Petra makes it clear that her ability to achieve a level of artistic independence, devoid of patriarchal aesthetics, is thanks to the support she receives from fellow female artists.

"As much as I preach self-love, it’s so hard for me to love myself," Collins said. "It’s really hard and it’s just about building a good network of people and in this case a good network of artists. Trying to live your ideals as best as you can."

There are, as any Kim Kardashian fan will tell you, other paths to confidence. Should you find that an unabashed celebration of your sexuality results in waves of support both from the social media masses and the discerning eye of the art world (Jerry Saltz likened Kim’s Selfish to Karl Ove Knausgaard’s My Struggle, calling it, “a chorus of one, written in a personal language of compassion, infinite theater, stage sets, setpieces, ceremony, shallowness, despairs, self-awareness, sexuality, unable to curtail one's selfishness and obsession with one's own image”), then confidence is a mere matter of flipping the direction of your iPhone camera to face towards your practiced pose.

But Kim and others, who've all billed their feeds full of selfies as art, have their critics. Including Milbrath.

"Personally, I don't admire most Instagram selfies as work," she said. "I think it's an important affirmation of self-love and self-confidence, and also an excellent tool for self-promotion. But in most cases, I don't see the artistic merit."

Milbrath makes a distinction between "promotional" selfies and those that add a layer of analysis and commentary to the display of self-love. As an uncanny act, Kim’s book is commendable. Reading her repetitive captions and sincere enjoyment of herself and those around her does, as Saltz also said, capture young Americans' online habits sans filter. But not every woman’s ass fits so snuggly into today's beauty standards, so much so that she has the guts to declare it a work of art. 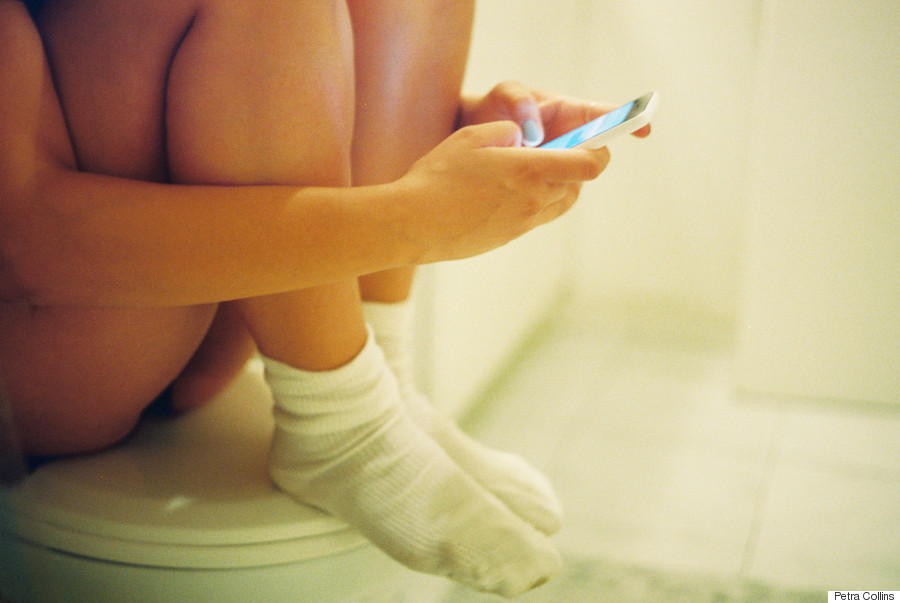 In fact, some young women who have attempted to do so -- including Collins -- have been censored. In 2013, she wrote for Oyster and The Huffington Post about the deletion of her Instagram account after posting a picture of herself wearing a bathing suit that almost fully covers her unshaven bikini line, which peaks out from under an elastic band. Of the incident, she wrote, “I did nothing that violated the terms of use. No nudity, violence, pornography, unlawful, hateful or infringing imagery. What I did have was an image of MY body that didn't meet society's standard of ‘femininity.’”

Taking instances like this into account, it's harder to see the message of Selfish -- unabashed self-love -- as something universal rather than specific to a single, conventionally beautiful heiress. But Petra and her peers are snapping shots from a wider angle -- one that allows viewers to see a fuller picture of womanhood.

CORRECTION: An earlier version of this article mistakenly attributed an opinion regarding photographer and filmmaker Lauren Greenfield's work to Michele Schreiber.