Pocketed away in the red-sandstone mountains of southern Jordan, between the Dead Sea and the Gulf of Aqaba, lies Petra, a desolate, lost city that was once a lively hub and a welcome oasis for traders and their caravans.

The war in neighboring Syria and the influx of refugees into Jordan was no deterrent to us and scores of travelers who visit Petra each day, marveling at its epic beauty and tugging at its shroud of secrecy. The more you get to know Petra, the more remains unanswered.

A local Bedouin, Mahmoud Twaissi, walked us into the 250-acre site just as the sun was setting and we had the place to ourselves. Despite having seen many of images of Petra, being there and feeling like a speck in the towering, hand-carved landscape, was very special. Low sunbeams touched the rich terracotta colors in the enormous rock walls, setting them glow.

We were walking through a narrow gorge, no more than four or five meters wide, with seventy meter-high rock walls on each side. The formation is a geological fault, a cleft created by an earthquake eons ago. The two-kilometer long passage is just as spectacular as the hidden city it leads to. Mahmoud keenly emphasized that the city we were about to enter was, "carved, and not built." 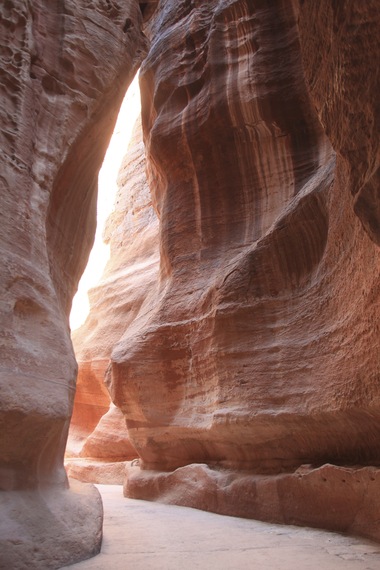 TOMBS OF THE NABATAEANS
A naturally fortified rest-station for caravans, Petra flourished from around 100 BCE to 200 CE as it also happened to form the nexus of an ancient trade route. Myrrh from Yemen, spices from India swords from Damascus and ornaments from Egypt would have exchanged hands here. The local Nabataeans' growing wealth was expressed in the buildings carved into the rock face. Greek and Egyptian influences made their way onto the facades of temples, homes and tombs. Local depictions of the Gods of mountains, rain, sun and fertility were carved into the niches. A nearby river had been dammed and its water was expertly channeled into the city. The carved facades of the monuments captivated us most, with their long pillars and beautiful motifs. Mahmoud pointed to the steps carved in the rock for workmen, who chiseled away at the structures from top to bottom to avoid loose debris falling over and ruining the delicate carvings. There was surprisingly little depth behind the facades, just single plain rooms with a few niches. 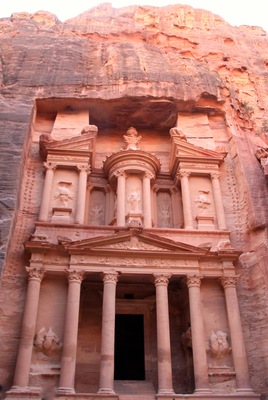 The Romans took over Petra in 106 CE, followed by the Byzantines. Eventually the city's geographic relevance faded, and perhaps an earthquake took its toll, Petra was abandoned and the sands blew in, enshrouding it for centuries on end and wiping it off the map. In 1812, Swiss explorer Johann Burckhardt rediscovered the ancient city, and much excavation has taken place to bring its monuments and history to light. Most of the site is still to emerge, but is popularity is already legendary. Petra is not just a World Heritage Site, it also made it to the Seven Wonders of the World list in 2000. 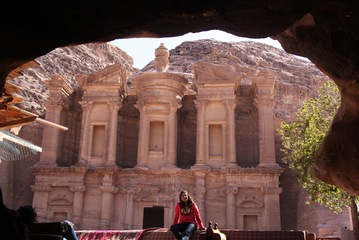 THE HILLTOP MONASTERY
Kohl-eyed Berber men had strategically placed their camels, horses and donkeys, bedecked in colorful textiles and wooly pom-poms, against the architectural backdrop to collect a few dirhams for pictures. Early next morning we took a scenic ride on a couple of donkeys to the far-flung hilltop shrine known as the Monastery.

The Monastery and many of the facades of Petra are carved along the lines of the iconic Treasury, known as "al khazneh" (khazana). There was speculation that treasure was stored here. No treasure was found, but the name stuck. The rediscovery of Petra, however, has been the greatest treasure for the Royal Kingdom of Jordan. 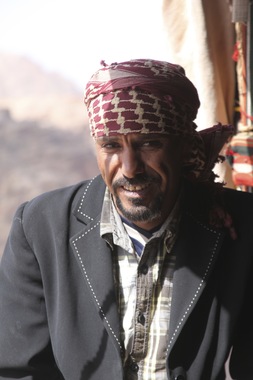 BEST TIME TO GO- In the spring and autumn.

HOW TO GET THERE- Fly to Amman, the capital of Jordan. Drive 2 hours and 15 minutes in car organized by your hotel in Petra.

TIPS- Visit the site very early or late to enjoy it without masses of tourists.

Coincide your visit with the candlelit night visit offered on certain days. If you do attend one, take a torch along to light your path.

Wear thick soled walking or hiking shoes as the paths have pebbles.

"A rose red city half as old as time" is a quote from a poem on Petra by John William Burgon.

This article first appeared in the Hindustan Times.