General David Petraeus stepped before Congress last week and vowed to protect our soldiers. "I see it as a moral imperative," he said, "to bring all assets to bear to protect our men and women in uniform." 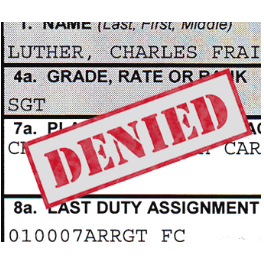 Sergeant Chuck Luther listened to Petraeus' words in disbelief. Days earlier the Army had dealt him a devastating blow: it officially rejected his appeal for a medical discharge, despite the mortar blast that tossed him to the ground, slammed his head against the concrete and left him with severe migraines, dizziness, vision and hearing loss, and piercing shoulder pain.

Luther's case made national news when he was then tortured by Army officials. The sergeant was held captive in an aid station closet for over a month, under enforced sleep deprivation, until he agreed to sign fraudulent documents saying he was ill before joining the Army and thus not eligible for disability benefits.

The documents blamed his vision and hearing loss following the mortar blast on a pre-existing mental illness, a "personality disorder." Since 2001, over 22,600 soldiers have been pressed into signing such documents, affirming a pre-existing condition, making them ineligible for disability benefits, saving the military billions of dollars.

"I look at my discharge papers and those words are still there: 'personality disorder,'" says Luther. "To be labeled with a mental illness I've never had ... it haunts me. I'd give up just about anything to get rid of those words."

The sergeant filed an appeal with the Pentagon, seeking a proper medical dismissal  and the removal of that phony mental illness. He and his family spent two years filing the paperwork: over 400 pages of medical exams and witness statements, each documenting Luther's excellent health before the mortar blast left him with severe traumatic brain injury.

As Luther waited for the Pentagon's decision, an outraged nation lined up behind him. Soldiers put together a Facebook page to halt the type of fraudulent discharge thrust on Sgt. Luther, a group now with over 5,200 members. Senator Kit Bond, Republican of Missouri, went on the BBC to tell an international audience about Luther's case. Even President Obama stepped forward to express concern about discharges like Luther's.

It wasn't enough. Last Thursday the Army rejected Luther's appeal, affirming its original declaration that his severe physical wounds were caused by a problem with his personality.

"I know he puts on a brave front. But when he got the news, he was crying," says Nicki Luther, the sergeant's wife of 18 years. "He had this look, like he was just defeated, broken. That just tore me up inside. Those Army people need to know, there's a family behind this man. When he hurts, we hurt. ... Someone somewhere has to know this just isn't right."

On this Independence Day, the Luthers are wondering: is Petraeus that someone?