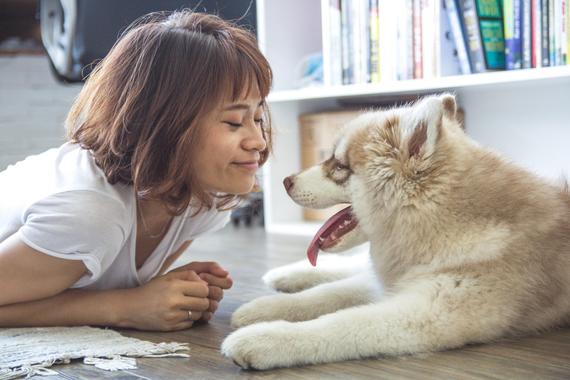 An overweight, jowly dog can be cute, harrumphing around the house as its rolls of fat hypnotically bounce up and down. And there's something endearing about a dog sitting patiently at its owner's feet, yearning for a sliver of food.

But pet obesity is actually a significant problem. Obesity affects 53% of all cats and dogs in the United States and significantly reduces their life expectancy. On average, obese dogs live 5 fewer years and obese cats live 7 fewer years, which is almost half their life span. If you're a cat lover, you can't bear the thought of your precious "Cat Benatar" having his life cut short by 7 years.

The leading cause of this obesity? Overeating.

And obesity isn't the only problem caused by overeating. Gastric dilatation, a potentially fatal twisting of the stomach, is caused when dogs eat too much too fast.

But what can you do?

Can Technology Solve The Eating Problem?

Edward Hall, the founder and CEO of Petrics, has devised a technical solution for a very manual problem.

After seeing his mother struggle to police the food intake of her multiple pets, Hall knew there had to be a better way. And so he devised a simple tag that attaches to a pet's collar. This tag communicates with the Petrics feeding bowl, which will only open when the tag uniquely assigned to it comes near. This prevents pets from eating from the bowls of other pets in the house. Each pet receives their own uniquely identifying tag which only gives them access to their feeding bowl.

Watch Edward's pitch at a recent gathering of entrepreneurs in North Carolina:

This unique feeding system prevent pets from eating each other's food and, save time & money ensuring the right food gets to the right pet.

For dogs who are prone to eating too much too quick, Petrics also offers a modular autofeeder which can be added onto the feeding bowl. The autofeeder automatically breaks up the daily amount of food into smaller meals spread throughout the day, limiting a dog's intake at any given meal.

The collar tag, the feeding bowl, and the autofeeder all connect to a smartphone app. From the app, owners can schedule feeding times, create and monitor upcoming veterinary visits, and receive health tips specific to their pet.

Perhaps the biggest area of promise for Petrics is their data collection and analysis. Every Petrics product collects data, which is then stored and analyzed by Petrics. As Hall said in his recent Verge pitch, "We are big data, so the more products we have as we grow, the more data we can collect."

The potential uses for this data are endless, including specially tailored predictive recommendations for pet owners, aggregate data to veterinarians, trend data to health organizations, advertisers, and a host of other possibilities. Hall even discussed the possibility of a subscription food service that automatically delivers food based on how much is consumed by the pet. It's no secret that big data is big money, and it would seem that the real money for Petrics could be in the data.

Currently Petrics is in Alpha testing. As they move past Alpha testing, they have plans for crowdfunding and ecommerce development.

A Big Market Quickly Filling Up

The pet market is enormous, with around $42 billion spent every year on cats and dogs. This massive market means Petrics won't be alone in the smart feeding market. Competitors are already emerging, such as Obe, who have their own version of a smart bowl, and Petnet who has their own version of the autofeeder. And we should only expect the market to get more crowded.

Clearly, differentiation and data analysis are the keys to Petrics' survival. In the age of big data, those who collect the most data and analyze it most effectively always win.

As Hall says in his pitch, "Execution is what matters most," when it comes to building out Petrics. If Petrics can execute, they certainly have a lot of potential.