Integrative veterinary oncology is a rapidly-growing field. Researching new techniques allows us to improve outcomes and options for both people and our beloved animal friends. [1] [2] [3] These advances are leading to expanded discussions about the ethics of treating cancer in animals. [4] Some of these advances are terribly simple. Research now shows us that some of the most powerful agents for preventing cancer development and spread are already in Mother Nature's plan if we will only eat properly. Phytonutrients, chemicals that exist naturally in plants, can directly slow cancer cell growth, starve them, and even kill them dead. More importantly, these compounds may even assist in activating genes that remove toxins from the body and prevent cellular injury that favors cells mutation into cancerous tumors. [5]

One day we may successfully address cancer in our world by preventing more cases than we are forced to treat, but that depends upon people learning important information and then putting it into action. [6] Presently, cancer is an all-too-frequent condition we must face in our clinics on a daily basis. We address these patients in many ways using all available technologies. Removing all the cancer through surgery or chemotherapy is a common goal, but this doesn't always work, and so we need other ways to approach these cases. [7] That is the heart of the integrative health movement as we successfully combine sophisticated, scientific advancements with traditional complementary and alternative therapies. [8] [9] [10]

Radiation therapy is a commonly-used technique in managing veterinary oncology patients. Radiation therapy in veterinary medicine consists of focusing high doses of energy to cancerous tumors. It is used to treat large cancerous masses that cannot be surgically removed, cancers that have been surgically removed with incomplete or narrow margins (microscopic disease), or to treat pain and inflammation being caused by the cancerous masses (palliative therapy). With conventional radiation therapy, small doses of radiation therapy are given on a daily Monday-Friday schedule over a period of approximately one month. Each patient goes under a short anesthesia to keep them still while the beam is being delivered. After receiving radiation reversible side effects such as local skin irritation are common.

Stereotactic radiosurgery, or stereotactic body radiation therapy, is based on the principles of delivering high doses of radiation therapy to the normal tissues while sparing or avoiding doses to surrounding tissues, one of the greatest limiting factors historically in conventional radiation therapy. Radiosurgery was first described in 1951 by Lars Leksell, a neurosurgeon at the Karolinska Institute in Stockholm, Sweden. The initial work first involved treating human patients with benign conditions such as blood vessel malformations but later progressed to include malignant tumors. The first human patient was treated with Gamma Knife in 1968, but given the limited technology and prohibitive costs, the treatment remained limited. Given the advancement in technology, the reproducibility of patient positioning, and the availability of numerous human centers offering stereotactic radiosurgery, this technology is now becoming available to animals.

While well-established in human oncology, this type of radiation therapy is so new in veterinary medicine that few veterinary scientific papers exist, but thanks to pioneering cooperative efforts between veterinarians and human oncology centers, it is becoming available in a few locations in the United States. According to our radiation oncologist, Dr. Jarred Lyons, "stereotactic radiosurgery is best suited for cases with a tumor in a location where surgery is not feasible or where the owner does not want to do surgery. Brain tumors, spinal tumors, nasal tumors, bone tumors like osteosarcoma, prostatic tumors, and lung tumors not amenable to surgery are all candidates. Because this type of radiosurgery can deliver very precise and very high doses of radiation, usually patients require fewer treatments (usually one to three treatments as opposed to 16-22 for normal conventional radiation therapy). That means far fewer anesthetic events are needed and side effects are usually minimal."

As with all cancer therapies, the earlier the disease is detected the better the response. Seeking out properly done diagnostics early in the disease process can be critical. [11]

Eleven years ago, Robert Mitchell rescued a shepherd-labrador, mixed-breed puppy off the street in Lynwood, Calif. He and his wife, Lauren, fell in love with this little guy and named him Scrappy for his bubbly personality. Ten years later he developed a mild swelling off his left eye. Lauren took Scrappy to their local veterinarian, who suspected an infection or foreign body due to a small amount of blood-tinged fluid that drained from the area. Scrappy underwent a nasal scoping and instead of finding a foxtail they discovered a red, angry mass. The biopsy revealed nasal cancer.

Lauren is a nurse and was devastated by the diagnosis. "When I heard he had nasal cancer I cried for days," she said. She and her primary care veterinarian knew they needed to act quickly and so sought out expert opinion at a major veterinary oncology center in Culver City, Calif. After considering their options, which consisted of traditional radiation therapy, surgery, and an experimental clinical trial, Lauren and Robert decided to pursue the route which promised the best result, the fewest side effects, and the highest quality of life for their furry kid.

Scrappy underwent CyberKnife(TM) radiosurgery and recovered without any significant effects. Lauren says that his nasal hair did lighten in color but she is happy to have that mild change in exchange for elimination of his tumor. Scrappy is now six months post treatment and doing well. CT scans showed an excellent response. Scrappy, his owners and veterinarians are all delighted. 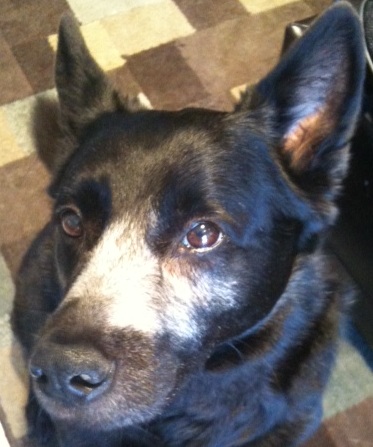 Improvements in medical care for animals and people are advancing at a dizzying rate. As more research is funded, we are discovering things that benefit both ends of the leash, and that makes the practice of medicine more challenging and interesting. Having options to share with clients allows us to successfully treat a host of disease states that were not possible just 10 years ago. And our love of our patients drives all of us to improve our options and results. The key is to find expert professionals and seek out the best technology available. In our office we say, "Seek truth and healing follows."