People for the Ethical Treatment of Animals killed most of the animals at its Norfolk, Virginia, shelter in 2014, according to preliminary figures filed with the Virginia Department of Agriculture and Consumer Services.

The group euthanized 2,454 of its 3,369 cats, dogs and other animals, the vast majority of which were "owner surrenders," meaning that they'd been relinquished to the group voluntarily. Just 23 dogs and 16 cats were adopted.

These figures aren't shocking to PETA's long-time critics -- who have for years pointed out the discrepancy between how this prominent animal rights group is perceived, and what they actually do -- but they are leading to a renewed call from no-kill advocates to put the shelter out of business.

How much money did PETA take in last year from unsuspecting donors who helped pay for this mass carnage? $51,933,001: $50,449,023 in contributions, $627,336 in merchandise sales, and $856,642 in interest and dividends. They finished the year with $4,551,786 more in the bank than they started, after expenses. They did not see fit to use some of that to comprehensively promote animals for adoption or to provide veterinary care for the animals who needed it.

By contrast, the Lynchburg Humane Society, also in Virginia, took in about the same number of animals as PETA but saved 94% and without PETA’s millions. Seagoville Animal Services in Texas took in 1/3 of the numbers (about 700 animals) but only 1/20th of 1% of the amount of money that PETA did, saving 99% of them on a paltry $29,700 budget. In fact, hundreds of cities and towns across America are saving over 90% of the animals and doing so on a fraction of PETA’s wealth.

VDACS collects and publishes information about how many animals are taken in and what becomes of them, for every public and private shelter, humane society, pound and other sort of animal rescue group in the state.

Indeed, as can be seen in this chart, Virginia as a whole has far lower euthanasia rates. And while PETA says it must euthanize animals because it's an "open-admissions" shelter -- meaning that it will accept any animal brought to it -- other such Virginia shelters, like the Lynchburg Humane Society, present far differently: 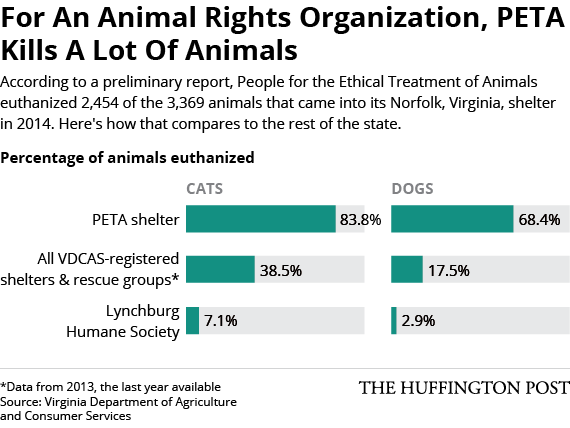 The initial figures for PETA's 2014 numbers were obtained via a Freedom of Information Act request filed by Winograd, a leader in the "no-kill" movement, which aims to reduce (or, even better, eliminate) the number of shelter animals that are put down every year.

VDACS spokeswoman Elaine Lidholm told The Huffington Post the figures may be amended before the final report is published online. The numbers, however, are in line with those from previous years -- numbers that have earned the high-profile animal rights group a significant amount of criticism.

When reached for comment, a PETA representative did not take issue with the numbers -- in fact, a PETA press release touted the group having provided "free euthanasia services for 2,454 dogs, cats, and other animals in just one area of the United States" -- but directed HuffPost to this video.

"Please know that everything you need is in the video. The video is our statement," the rep added, in response to another interview request -- having wanted to find out, among other things, how the group selects which animals will be euthanized, if the surrendering owners are made aware of their pets' likely fate and why the group doesn't open a dedicated low-cost euthanasia clinic in place of (or in addition to) its shelter.

The video touts PETA's low and no-cost spay/neuter programs and other veterinary services, as well as its provision of dog houses and supplies for outdoor animals. It then ends with a defense of euthanasia by Amanda Kyle, a fieldworker from PETA's Community Animal Project.

"It breaks my heart, but I know that euthanasia is a necessary part of alleviating suffering and dealing with the horrors created by irresponsible and careless people," she says. "In many cases, it's the best anyone can do for a particular animal."

It's a statement that's in line with a blog post by PETA president Ingrid Newkirk called "Why We Euthanize," in which she states:

It’s easy to point the finger at those who are forced to do the “dirty work” caused by a throwaway society’s casual acquisition and breeding of dogs and cats who end up homeless and unwanted, but at PETA, we will never turn our backs on neglected, unloved, and homeless animals -- even if the best we can offer them is a painless release from a world that doesn’t have enough heart or homes with room for them.

Winograd isn't buying that euthanasia is the only, or even the best, option for many of these animals, however.

"Surely PETA can do better than a 1 percent adoption rate, especially given their national media reach and enormous resources," he says. "What PETA is doing to dogs and cats is wrong not just in and of itself, but it is self-defeating to larger goals PETA claims it has to promote veganism and other animal rights issues."

On Wednesday, the Virginia Senate passed a bill that defines a "private animal shelter" -- like the one that PETA operates -- as "a facility operated for the purpose of finding permanent adoptive homes and facilitating other lifesaving outcomes for animals."

Private animal shelters are now defined under Virginia law as "a facility that is used to house or contain animals and that is owned or operated by an incorporated, nonprofit, and nongovernmental entity, including a humane society, animal welfare organization, society for the prevention of cruelty to animals, or any other organization operating for the purpose of finding permanent adoptive homes for animals."

Lidholm says it is "premature at this stage to speculate how the passage of SB 1381 would impact the operation of private animal shelters." But supporters say this change is important because if PETA's shelter isn't operating in accordance with the new definition, it might lose its status as a shelter -- and, thus, its access to euthanasia drugs.

"The current wording of the definition has been interpreted to create a loophole under which the PETA facility in Norfolk operates as a private animal shelter but without the purpose of finding permanent adoptive homes for animals," Tabitha Frizzell Hanes, of the Richmond SPCA, writes on the shelter's blog. "Over the past decade, as save rates at private shelters across Virginia have risen and euthanasia rates have fallen, the PETA facility euthanizes the animals it takes in at a rate of about 90 percent.

"It is out of step with the progress being made for our state's homeless animals for a private shelter to operate not with the purpose of finding animals adoptive homes but almost entirely to take their lives."

Companion legislation in the House hasn't yet been introduced, but Debra Griggs, with No Kill Hampton Roads, says her group has lined up a sponsor. However, sponsorship, she says, won't end the fight: "I'm not pessimistic, but I think it will take some work on advocates' part to pass."

There are other approaches now underway, as well. Winograd's group, The No Kill Advocacy Center, has petitioned VDACS to revoke the PETA facility's "shelter" status even without the change in definition. To this, he hasn't yet received a response.

He's also asked the state to issue regulations requiring shelters to disclose more information about their operations. A public comment period for that begins on Feb. 23, and according to Virginia's "Regulatory Town Hall" website, the Board of Agriculture and Consumer Services is scheduled to consider the request at its next board meeting on March 19.

"This time next year, I would love to see figures showing PETA did not kill any animals because they are no longer allowed to. Ideally, I would like to see a PETA that is true to its mission," says Winograd. "As to the public, they do not have to believe me and they shouldn't believe PETA. They owe the animals to look at the evidence, weigh it for themselves, and ask themselves if it is keeping with the vision for animals they wish to see."

UPDATE, Feb. 9, 2015: PETA's 2014 report has now been published on the Virginia Department of Agriculture and Consumer Services website.

Just 16 cats and 23 dogs were adopted, while forty-three cats and 209 dogs were sent from the PETA shelter to other shelters and rescue groups.

UPDATE, Feb. 23, 2015: SB 1381 has passed Virginia's House of Delegates, in a slightly amended form. A lobbyist hired by PETA to advocate against the bill has said that the passage could force PETA's shelter to close.

Others say it's not yet clear what the effect of the law will be, according to the newspaper Hampton Roads:

Robin Robertson Starr, CEO of the Richmond Society for the Prevention of Cruelty to Animals, sent lawmakers an email in response to Haner's, saying the bill would not prevent PETA from meeting the definition of a private animal shelter "so long as PETA were willing to make some effort to adopt out the animals in its facility."

If PETA is willing to do that, there should be no reason for the group to oppose the bill, she wrote.

But Sharon Q. Adams of Virginia Beach, chairwoman of the Virginia Alliance for Animal Shelters, said she's opposed to the bill because it's unclear how it would be interpreted. "We don't know," she said.

Here's the video and press release to which PETA directed The Huffington Post.