This morning, Pew Research released the findings of their most recent report, Online Harassment. This is a timely study, coming fast on the heels of hacked photographs of more than 100 celebrities, this month's ongoing Gamergate, and this week's Lewis' Law Twitter welcome to Monica Lewinsky in the wake of her anti-cyber bullying initiative launch.

The report includes a section, "In Their Own Words," that brings life to the data.

When you look at it by gender, however, you get a richer picture: 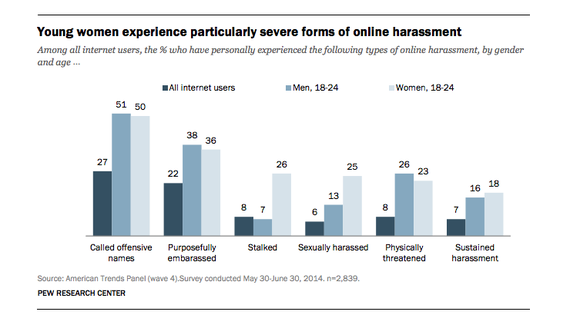 Many people are inclined to argue in somewhat unhelpful and binary fashion that "men are harassed online more than women," and leave it at that, but the details matter. Women are much more likely to experiencing stalking, sexual harassment and sustained harassment online. Men are more frequently called "offensive names," or be "purposefully embarrassed," and, while men indicate that they are marginally more likely to experience physical threats, stalking and physical threats overlap. "Young women," researchers concluded, "experience particularly severe forms of online harassment."

Gamergate, the most recent example of what misogyny looks like online, illustrates several of the findings of the Pew Report, particularly in the way that it illustrates the seamlessness of online and offline violence and demonstrates the problems social media companies face when they promise to keep users safe.

Many thoughtful people have written about Gamergate, so I won't here except to describe briefly what has happened to Zoe Quinn, Brianna Wu, and Anita Sarkeesian, the three women whose lives have been most negatively affected. There are other women in gaming who have experienced similar treatment and Sarkeesian has been living with incredible levels of hostility for years.

The blog that launched Gamergate was, effectively, a revenge post written by developer Zoe Quinn's disgruntled ex boyfriend. (He accused her of unethical behavior, which has not been demonstrated or verified.) Whatever Gamergate's original intent, or the genuine desires of some participants to address concerns about the relationship between gaming companies and writers, it is impossible to separate it from the fact and nature of this post or from the slut-shaming of Quinn or the escalating violence against her, Wu and Sarkeesian.

A vocal and active cohort of Gamergate's inchoate army latched onto the post and quickly turned their concerns with how games are covered in media into a prolonged campaign of sexist and violent harassment of three outspoken women. The Daily Dot, further inflaming the already enraged, called it The Sexist Crusade to Destroy Zoe Quinn. Quinn has had to leave her home. So Gamergate, while it may have erupted anyway, was catalyzed by act of gendered intimate partner rage.

Brianna Wu, a game developer became a target herself for criticizing Gamergate. After she tweeted caustic commentary about the movement, she was threatened with death and rape and her private information shared publicly. In an interview with The Guardian, Wu explained, "the conversation moved to places that threatened my personal safety," she says. "I made the decision to leave, and law enforcement said it was reasonable. I basically just left the house. I have no idea where I'll be living this week or even next month."

It was into this environment, in late August, that Sarkeesian, a popular cultural critic, released her newest free video, Women as Background Decoration, looking at depictions of women in games. Her usual quotient of threats immediately increased. Three years ago she was targeted by a cyber mob in an attack that included a game where people could virtually bludgeon her face, leaving it bruised and bleeding. Thousands played. Last week, she had to decline a speaking engagement at Utah State University after threats that her appearance would result in "the deadliest school shooting in American history."The threats made direct reference to the Montreal Massacre in which an anti-feminist shooter screamed "I hate feminists," and opened fire on a classroom of female engineering students, killing 14 women.

The FBI is investigating several aspects of Gamergate-related abuse. However, while Internet companies urge users to go to the police if they are genuinely concerned, the police have almost no ability to deal with what is happening online and are, historically, disinclined to take "harassment" of women seriously. Sarkeesian, Quinn and Wu are very familiar with other women, both in their field and elsewhere, who have left public and professional spaces as a result of violent sexism. The harassment spills over to their supporters as well. Many other women, and men who speak in their defense, are similarly treated, although not at this scale. I, and many others, were doxxed just for tweeting support for them.

Just in case it's not clear for some reason, people are threatening to rape and kill women and their families for speaking publicly in defense of women's equality.

A recurring theme, since Kathy Sierra was first hounded offline, is a tendency for media to want to focus on the incident du jour or to home in on a specific sector of the culture. Gaming's an easier one to fathom, because people see violent games and are worried about their influence. However, gaming, while maybe more distilled, isn't special. This gender imbalanced harassment is age old and common, regardless of industry or space. In addition to the three women at the center of Gamergate, here other examples:

2) Porochista Khakpour was on the receiving end of literary Ed Champion's ire last month -- so he threatened, blackmailed and tried to sexually shame her in a series of public tweets last month.

3) Adria Richards became the target of an online campaign that included a "a picture of a bloody, beheaded woman with the caption "When Im done." She was fired from her job just after her employer's website was attacked as part of the campaign against her.

4) Rebecca Watson openly talked about sexual harassment and sexism in the atheist community, so was barraged with rape threats. She described her experience in Slate, "My YouTube page and many of my videos were flooded with rape "jokes," threats, objectifying insults, and slurs. A few individuals sent me hundreds of messages, promising to never leave me alone. My Wikipedia page was vandalized. Graphic photos of dead bodies were posted to my Facebook page."

5) Caroline Criado-Perez won a small victory for gender inclusive media when she successfully campaigned to get Jane Austen on a UK banknote. She was the barraged by graphic rape and death threats. Two people were eventually arrested and jailed.

6) Classicist Mary Beard was verbally harassed and sent a bomb threat. Basically for having the nerve to speak with authority about the Ancient World.

7) Karen Traviss, the only woman writer of Star Wars books, was bullied, through a series of "screaming ranting videos" until she stopped writing them.

8) Zerlina Maxwell suggested that boys be taught not to rape, so, of course, got rape and death threats.

9) Activist Trista Hendren was sent up to 500 graphic and abusive comments a day on a page she set up in Facebook to help report content glorifying rape and domestic violence. The comments included those sharing her work and home addresses, making references to her children, displaying child pornography and threatening her with graphic descriptions.

10)Rebecca Meredith, a Cambridge University debater, confronted sexist hecklers only to have, among other things, her rape potential openly discussed.

11)Shannon Watts, founder of Moms Demand Action became the focus of intense harassment as a result of lobbying for gun control. " get back in the kitchen and take those damn shoes off! its people like you that are going to destroy our 2nd Amendment right. stupid bitches!" A pro-gun Facebook page was populated by comments calling her called a "bitch," "cock sucker," "traitor," and "liar."

12)Women writers, as a group, very publicly engaged, tend to garner particularly hateful attention. A Demos study of Twitter data showed that women writers are among those most likely to be the targets of abusive speech on that platform. Jezebel writers, almost all women, recently wrote a public letter, about a "rape gif problem," to their employer, Gawker, for failures to address the effects that readers posting violent rape pornography was having on their ability to work. Imani Gandy, a legal expert and writer, recently wrote in RHRealityCheck about the daily "litany of racist and sexist slurs that usually await me from anonymous keyboard warriors whose only purpose on Twitter is to disrupt, harass, and abuse." Earlier this year, after Jessica Valenti documented responses to an article she wrote about women's health and soon after an editor at the Guardian wrote more extensively about sexist public treatment of female writers.

This is tech-enabled, reactionary, gender-based backlash and it is pervasive. This extreme harassment affects people who are, for the most part, not in the public eye. It's the tech manifestations of double standards and everyday sexism.

Girls and women online, all of us, are either dealing with some level of sexist harassment or are witnessing it and deriving lessons from how society responds. Seventy-eight percent of the Pew survey respondents say they have witnessed harassment. I speak to women who don't speak up, don't support others, change the things they write about, counsel younger women to be cautious -- all so that they can avoid the threat of what is almost always male perpetrated violence rampant in this public space.

The idea that "speech will be the business of men," as Mary Beard herself has so diligently and clearly explained, is ancient and these are just the newest contestations. That idea is also rooted in male domination and violence. Stalking, gendered slurs, slut-shaming, sexually charged, often pornographically-laden, abuse, and sustained daily harassment online or off are the timeless weapons of a global sexist culture.

This harassment should, really, not surprise anyone. Women are harassed this way every day, on streets, at work, in their own homes. There is a difference now, however. Whereas before, a woman might say that she was assaulted, defamed, insulted, threatened or otherwise maligned, very few ever heard about it or, if they did, it was rarely taken seriously. The Internet makes visible what was before invisible, however. What we are seeing now, as Catherine Buni and I recently wrote, is so overt that it is no longer possible for people to easily ignore or trivialize it. And, try as many might, it's also impossible to suggest in the absence of "proof," that women are lying or exaggerating.

So, while the Internet has its abusive cesspool qualities, it also provides a mechanism for positive change. What people choose to do with this information has yet to be seen.