WASHINGTON -- As President Obama and Congressional lawmakers begin a new round of deficit-reduction talks, a new Pew Research Center survey illustrates an important aspect of their challenge: While Americans see a need to make changes to the popular entitlement programs, they "decisively support" keeping Social Security and Medicare benefits as they are now.

The survey of 1,502 adults, conducted nationwide June 15 to 19, finds mixed opinions on the three best known entitlement programs: Social Security, Medicare and Medicaid. When asked separately about each of the three programs, huge majorities (between 77 and 87 percent) say each of the programs has been "good for the country," but less than half (36 to 41 percent) rate the job they do "serving recipients" as excellent or good. Fewer still (15 to 18 percent) give a positive rating to the "current financial condition" of each program. Thus, it should come as little surprise that large majorities say the three programs need "major" rather than minor changes or should be "completely rebuilt."

As the Pew Research report emphasizes, however, "the public's desire for fundamental change does not mean it supports reductions in the benefits provided by Social Security, Medicare or Medicaid." When asked which is more important, large majorities tell the pollsters that they would rather leave the benefits of these programs as they are now rather than making cuts or expecting beneficiaries to take on more responsibility for their costs.

And when asked simply, "what is more important, taking steps to reduce the budget deficit or keeping Social Security and Medicare benefits as they are," nearly twice as many Americans prefer the status quo (60 percent) to cuts in benefits (32 percent).

The report also highlights two important patterns in the data that will be of great interest to policymakers. First, they find that potential entitlement reforms create "far more serious internal divisions" among Republicans than Democrats. For example, while Democrats overwhelmingly reject Social Security and Medicare benefit cuts in order to reduce the deficit (71 percent to 23 percent), Republicans are more divided. Slightly more Republicans want to keep Social Security and Medicare benefits as they are (47 percent) than want to see benefits cut to reduce the deficit (44 percent).

Second, though perhaps not surprising, older Americans who benefit from Social Security and Medicare rate the programs more positively than younger Americans. For example, majorities of those age 65 or older give an excellent or good rating to Social Security (57 percent) and Medicare (61 percent) for the way they serve the people they cover. Among younger Americans, positive ratings of the programs fall to between 33 and 40 percent. 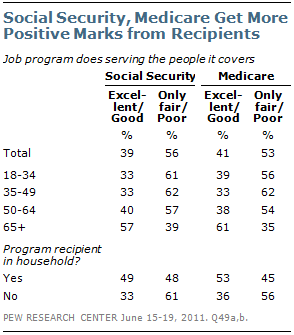 On the same note, older Americans are also the least likely to want to change these programs, with fewer than a third saying they want major changes or a complete rebuilding of either Social Security or Medicare.