WASHINGTON -- The new Political Typology report released this week by the Pew Research Center provides some critical context to the ongoing discussion about the potential political impact of the killing of Osama bin Laden. Whatever the size or duration of any bump in approval ratings the terrorist's death produces for President Barack Obama, a fundamental change in U.S. politics is unlikely. This is because Americans have grown "more inward looking," as the report shows, with divisions over national security and assertiveness in foreign affairs growing less pronounced and less consequential then they were six years ago, the last time the survey was conducted.

Pew's Political Typology survey is unique enough to require some explanation. The latest report is based on a massive telephone survey of 3,029 adults conducted in March. Cell phone interviews were done with 1,003 of the participants. Just as in 2005, the report is not intended as a way to score which side is winning or losing the battle for public opinion. As Emily Swanson reported yesterday, it aims to measure how Americans divide on values and political beliefs in a way that gets beyond the usual left versus right, Democrat versus Republican analysis that is common to political polling.

The heart of the study is a series of 19 questions on variety of different political issues that ask respondents to choose which of two statements best reflects their views (Q17 to Q37 in the topline questionnaire). The Pew analysts identify the opinion dimensions underlying these questions and use them to create nine mutually exclusive and distinctive subgroups. (More details about the methodology are available here.)

The table below sorts the groups Pew created by their party identification. Two are heavily but not exclusively Republican (Staunch Conservatives and Main Street Republicans), three are heavily Democratic (Solid Liberals, Hard Pressed Democrats and New Coalition Democrats) and three in the middle are mostly independent (Libertarians, Disaffecteds and Post Moderns). A ninth group (Bystanders) consists of politically disengaged voters.

Two of the middle groups (Libertarians and Disaffecteds) lean and typically vote for Republicans more often than Democrats, while the third (Post Moderns) is more likely to lean and vote Democratic. 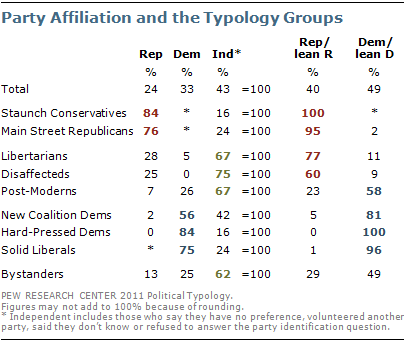 Although many aspects of the report have remained constant across the six typology studies conducted by the Pew Center since 1987, each is slightly different. This evolution reflects both changes in the American "political and economic climate," as well as "the influx of younger voters and racial and ethnic minorities who are now influencing the political alignments," as the latest edition explains.

Now what does this study tell us about the bin Laden bounce? In particular, what does it say about the changing role national security plays in our politics?

"In 2005," the new report says, "at the height of the Iraq war and shortly after an election in which national security was a dominant issue, opinions about assertiveness in foreign affairs almost completely distinguished Democrats from Republicans." Now, however, "attitudes about government separate Democrats from Republicans, and it is these beliefs that are most correlated with political preferences looking ahead to 2012."

One way to illustrate the change is to examine how Pew's voter groups answered one question about the role of military assertiveness then and now.

Six years later, the overall numbers are roughly the same -- 31 percent emphasize military strength and 58 percent choose diplomacy -- but the way these attitudes correlate to the Pew groups is very different.

In 2005, the strength versus diplomacy question was highly predictive of the partisan ordering of the groups, with the biggest differences appearing between the primarily Republican, independent and Democratic groups. Notice the nearly linear decline of a preference for military strength moving down the chart below from the most Republican of the 2005 group (Enterprisers) to the most Democratic (Liberals). Moreover, notice that in 2005, nearly a third of the two most independent groups of the 2005 typology survey (30 percent of Upbeats and and 32 percent of Disaffecteds) preferred strength to diplomacy. 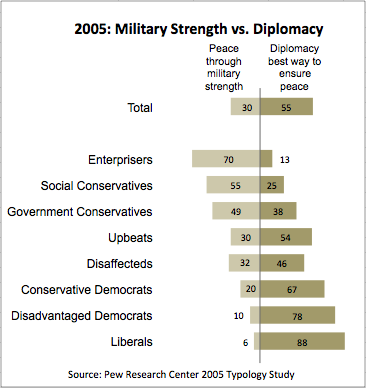 While partisan differences remain, this year's chart of the same question looks different. 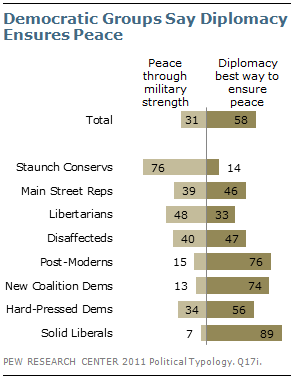 As the report explains in more detail, we see even less division among the groups on a variety of foreign policy and national security issues, including the war in Afghanistan, the use of force in Libya, the trade-offs between privacy and safety from terrorism and the role of foreign trade.

What now divides the party groups more clearly are attitudes about the efficiency and worthiness of government and the social safety network. These are also the issues now most likely to create cross-pressure on true swing voters. For example, 45 percent of the Democratic-leaning Post Moderns worry that "government is almost always wasteful and inefficient," while 61 percent of the Republican-leaning Disaffecteds agree that "the government should do more to help needy Americans, even it if means going deeper into debt."

It is this evolution -- the growing role of views on government and the social safety net in driving political preferences and the fading importance of military assertiveness and national security -- that provides a critical context for understanding where the death of Osama bin Laden fits in our politics. Six years ago, such an event might been more critical in resolving doubts about Democrats among true swing voters. Now those swing voters are more concerned about the economy and what they perceive as an expansion in government.