"The commodification of Otherness has been so successful because it is offered as a new delight, more intense, more satisfying than normal ways of doing and feeling ... In many ways it is a contemporary revival of interest in the "primitive" with a distinctly postmodern slant." -bell hooks inEating the Other

Strange Opening to an Essay About Native Headdresses:

My father was nearly half-black. My biological dad was a handsome and huge mixture of African-American, German and Native blood that gave him beautiful brown skin, very soft and wavy long black hair that he oftentimes kept in a braid, and freckles. His generous genetic contribution makes me a shade under a quarter African-American. I always knew that I had black lineage and I was thankful for the unique combination that made me me. There's a reason that I can dance this good! Yet, I wasn't raised within the African-American culture -- I was raised by a beautiful, brown-skinned single, culturally involved, Native mother on several Indian reservations with primarily Native friends.

Even though I have some African-American lineage, I wasn't raised culturally "Black."

As hip-hop came to dominate pop culture, so did many of the characteristics of the African-American rappers who created the art form (and make no mistake, hip-hop is a black artform). It was then that folks of all colors began to ingratiate themselves into what they perceived as "Black culture" to complete their "hip-hop look" (in the words of Nas, "Make my cypher complete"). In the '90s, baggy clothes, hip-hop slang, and super-duper urban accents began to show up everyplace from the cornfields of Iowa to the hills of Appalachia. Unstoppable force.

One of the unfortunate effects of hip-hop's hegemony is non-black folks' use of the word "nigga" (or "nigger" -- some people split hairs, but I think both versions are unfortunate). The word was a very prominent part of rap lyrics, and so many non-black folk -- I think -- felt that if they purchased the album, they also purchased part of the culture and the right to use that word! It's well documented -- everybody from Madonna to Justin Bieber has been caught using it. I remember going to a sold-out Jay-Z concert at Hammerstein Ballroom in NYC, probably half the crowd black and half other ethnicities, and everybody in the room irrespective of color sang along every word to Jay-Z's "Jigga My Nigga." It was a "hip-hop moment," right?

Ummm, not really. I felt weird and outta place. It was inappropriate.

I didn't sing along. Not because I'm overly politically correct. No, instead it was because I respect the spirits of resilient black ancestors who suffered and survived under that word during slavery and Jim Crow. I didn't deserve to claim that right and pretend that it was part of my legacy. Granted, I think the word has some scholarly/teaching value (to wit, I utilize it as an analogy to the word "Redskin" because of the incredibly similar history of the two words, "Redskin" and "Nigger"); history is not politically correct. But I don't feel right using it in my regular speech because I never felt like I paid those dues to use it.

Instead, I'd be a tourist saying "nigga" simply because it was the "hip-hop" thing to do at the time. Honestly, I hate when non-black folks do that. Whether or not someone agrees with black folks using the word "nigger" or "nigga" (I know there's plenty of difference of opinions), one thing is for certain -- non-black folks simply should not say it.

If there is a right way to say it, that right only belongs to black folks.

Why Am I Telling You This?

Many non-Natives do not understand why Native people get upset when non-Natives wear faux-tribal headdresses. For example, the super-mega producer Pharrell Williams recently wore a faux-Native headdress on the cover of European Elle magazine. Now, there are many Native people who are incredibly pissed off at the "Happy" producer, vowing never to support his endeavors again. He promptly apologized and Elle magazine tried to distance itself from any culpability for the offensive attire in the matter, removing their statement that "We persuaded Elle Style Award winner Pharrell to trade his Vivienne Westwood mountie hat for a Native American feather headdress in his best ever shoot."

But why are Native people so mad about this?

First, let me make clear that very much like those white hip-hoppers in the Hammerstein Ballroom, I don't think that Pharrell Williams is, in any way, racist. Just like those hip-hoppers, he was stupid. He was obviously guided by stylists from Elle magazine who "persuaded" him to do something idiotic; he's accountable, but he's accountable for being stupid or naïve and not necessarily a racist. However... 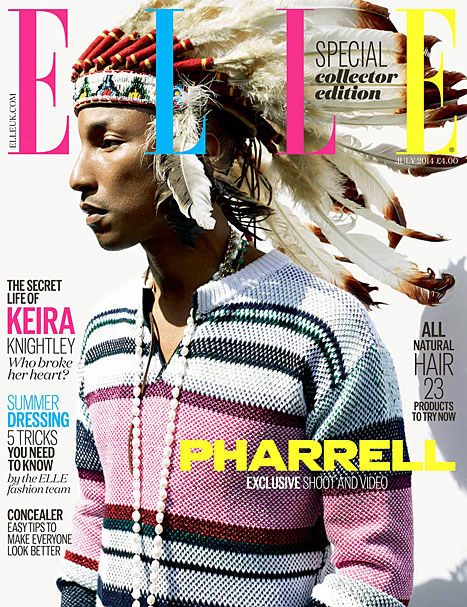 There are things that are still sacred in 2014. Simply because I'm 1) part black or 2) a hip-hopper, that does not give me the right to use the word "nigger/nigga"; that loaded and powerful word is one of those things that cannot be "commodified," as the brilliant bell hooks termed it. Black folks have paid for EXCLUSIVE ownership of that word over the course of centuries of oppression, recovery and then redemption. Headdresses are another one of those things. Native people utilize headdresses as one of our highest honors, reserved for those select few people who did something so valorous and special -- oftentimes in battle, fighting off genocide -- that we must identify them by putting pieces of the soaring eagle on their head. 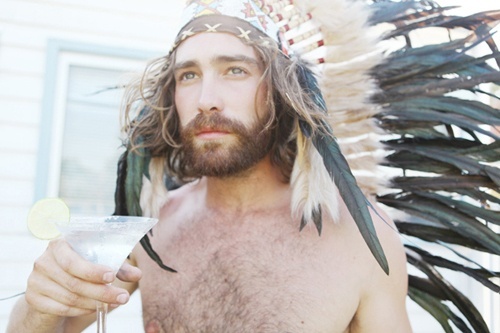 It is reserved for those special individuals. Exclusively.

It's not simply a matter of being "Native" either. It's not that simple. MOST Natives will never earn the right to wear a headdress. It's not a racial thing, it's an experience thing, a "merit" thing. Similar to the way that I -- almost one quarter black -- don't have the right to say the word "nigger/nigga" simply by biology. I come from a people -- the Blackfeet Nation -- who honor exceptional individuals with headdresses. Yet, I have never been given this honor. There's a strong possibility I never will be given this honor in the future either.

Some people simply don't hold anything sacred. When nothing's sacred, it is very difficult to explain why non-Natives flippantly wearing headdresses are horribly offensive. However, Native people do hold things sacred. Headdresses are one of those things. As such, when I see non-Natives recklessly flaunting our sacred headdresses I think back to those white people in Hammerstein Ballroom joyously shouting the words "nigger/nigga" along with a rap song: even though they thought it looked cool or exotic or "edgy," it was inappropriate, like someone took a precious and painful thing and pissed on it simply to be cool. A novelty item just to be consumed. And they simply did not have that right.

Gyasi Ross is a father, an author and an attorney. He grew up on both the Blackfeet and Suquamish Indian Reservations and continues to work and live within his community. He is the author of two books, How To Say I Love You In Indian and Don't Know Much About Indians (but i wrote a book about us anyways), both available at www.cutbankcreekpress.com. He also writes his own column for Indian Country Today Media Network called "The Thing About Skins."