It used to be joked that a consultant is someone who borrows your watch to tell you what time it is. These days, the opportunist is Big Pharma, which raises your insurance premiums and taxes while providing you "low-priced" drugs that you paid for.

How did Pharma get a good third of the U.S. taking antidepressants, statins and purple pills, albeit at low prices? By selling the diseases of depression, high cholesterol and gastroesophageal reflux disease -- or GERD. Supply-driven marketing, also known as "Have Drug; Need Disease and Patients," not only turns the nation into pill-popping hypochondriacs, it distracts from Pharma's drought of real drugs for real medical problems.

Of course not all diseases are Wall Street pleasers. To be a true blockbuster disease, a condition must 1) really exist but have huge diagnostic "wiggle room" and no clear-cut test 2) be potentially serious with "silent symptoms" said to "only get worse" if untreated 3) be "under-recognized," "under-reported" with "barriers" to treatment 4) explain hitherto vague health problems a patient has had 5) have a catchy name -- ED, ADHD, RLS, Low T or IBS -- and instant medical identity 6) need an expensive new drug that has no generic equivalent.

Here are some potential blockbuster diseases Pharma hopes you get in 2012.

Everyday problems labeled as "depression" sailed Pharma through the last two decades. You weren't sad, mad, scared, confused, remorseful, grieving or even exploited, you were depressed -- and there was a pill for that. But depression peaked just like the Atkins diet and the Macarena. Luckily there is adult ADHD, which has doubled in women 45 to 65 and tripled in men and women 20 to 44, according to the Wall Street Journal.

Like depression, adult ADHD is a catch-all category. "Is It ADHD or Menopause?" asks an article in Additude, a magazine devoted exclusively to ADHD. "ADD and Alzheimer's: Are These Diseases Related?" asks another article in the same magazine. 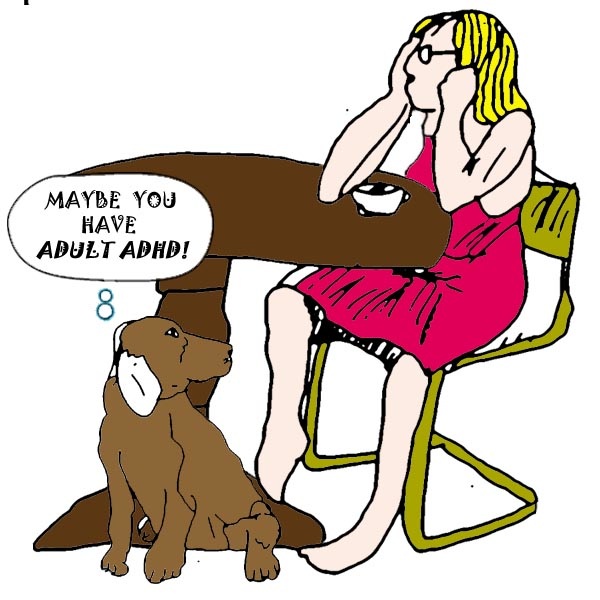 "I'm Depressed. Could it be ADHD?" says an ad in Psychiatric News, showing a pretty but pouting young woman. "Adults with ADHD were nearly 2x more likely to have been divorced," says another ad, called "Broken Promises," in the same publication, exhorting doctors to "screen for ADHD."

Adults with ADHD are often, "less responsible, reliable, resourceful, goal-oriented and self-confident and they find it difficult to define, set and pursue meaningful internal goals," says an article co-written by Harvard child psychiatrist Dr. Joseph Biederman, who is credited with putting pediatric bipolar disorder on the map. They "show tendencies to being self-absorbed, intolerant, critical, unhelpful, and opportunistic," and "tend to be inconsiderate of other people's rights or feelings," says the article, describing most people's brother-in-laws.

Adults with ADHD will have trouble keeping a job and get worse without treatment says WebMD, tapping into the second requirement of a blockbuster disease -- symptoms worsen without pills. "Adults with ADHD may have difficulty following directions, remembering information, concentrating, organizing tasks or completing work within time limits," says the site, whose original partner was Eli Lilly. "If these difficulties are not managed appropriately, they can cause associated behavioral, emotional, social, vocational and academic problems."

How did Pharma get 5 million kids and now, maybe, their parents on ADHD meds? In Time Square, 26- by 20-foot screen ads in that ask "Can't focus? Can't sit still? Could you or your child have ADHD?" four times an hour don't hurt. (Bet no one had trouble focusing on that!)

Still, convincing adults they aren't sleep deficient or bored but have ADHD is only half the battle. Pharma also has to convince kids who grew diagnosed as ADHD not to quit their meds, says Mike Cola of Shire (which makes the ADHD drugs Intuniv, Adderall XR, Vyvanse and the Daytrana patch). "We know that we lose a significant number of patients in the late teen years, early 20s as they kind of fall out of the system based on the fact that they no longer go to a pediatrician."

A Shire ad in Northwestern University's student paper this year takes the issue head on. "I remember being the kid with ADHD. Truth is, I still have it," says the headline splashed across a photo of Adam Levine, the lead singer of Maroon 5. "It's Your ADHD. Own It," is the tagline. (Was "Stay Sick" the runner up?)

Of course, pushing speed on college kids (or anyone for that matter) isn't too hard. Why else do meth dealers say, "first taste free"? But Pharma is so eager to retain its pediatric ADHD market, it has funded for-credit courses for doctors like, "Identifying, Diagnosing, and Managing ADHD in College Students," and "ADHD in College: Seeking and Receiving Care During the Transition From Child to Adult."

To make sure no one thinks ADHD is a made-up disease, WebMD show color-enhanced Pet scans of the brains of a normal person and an ADHD sufferer (flanked by an ad for Vyvanse). But it is doubtful the scans are really different, says psychiatrist Dr. Phillip Sinaikin, author of Psychiatryland. And even if they are, it proves nothing.

"The crux of the matter, is that there is simply no definitive understanding of how neuronal activity is related to subjective consciousness, the age old unsolved body/mind relationship," Sinaikin told AlterNet. "We have not advanced beyond phrenology and this article in WebMD is simply the worst kind of manipulation by the drug industry to sell their overpriced products, in this case a desperate effort by Shire to maintain a market share when Adderall goes generic."

Rheumatoid arthritis is a serious and dangerous disease. But so are Pharma's immune-suppressing biologic drugs like Remicade, Enbrel and Humira, which are pushed to treat it. While RA attacks the body's own tissues, leading to inflammation of the joints, surrounding tissues and organs, immune suppressors can invite cancers, lethal infections and activate TB.

In 2008, the FDA announced that 45 people on Humira, Enbrel, Remicade and Cimzia died from fungal diseases and investigated Humira's links to lymphoma, leukemia and melanoma in children. This year, the FDA warned that the drugs can cause, "a rare cancer of white blood cells," in young people and the Journal of the American Medical Association (JAMA) warned of "potentially fatal Legionella and Listeria infections."

Immune-suppressing drugs are also dangerous to the pocketbook. One injection of Remicade costs up to $2,500, one month of Enbrel costs $1,500 and a year of Humira costs up to $20,000.

Once upon a time, RA was diagnosed from the presence of "rheumatoid factor" and inflammation. But, thanks to Pharma's supply-driven marketing, stiffness and pain are all that are required for the diagnosis today. (Athletes and people born before 1970 -- line forms to the left!)

In addition to diagnostic wiggle room and a catchy name, RA has other blockbuster disease requirements. It will "only get worse" if untreated, says WebMD and it is often "misdiagnosed," and under-reported says Abbott's Heather Mason because "people often don't know what they have for a while."

So serious a disease, it costs over $20,000 a year to treat but so subtle you may not know you have it? RA sounds like a blockbuster.

Another under-reported disease is fibromyalgia, characterized by widespread, unexplained bodily pain. Fibromyalgia is "almost a textbook definition of an unmet medical need," says Ian Read, of Pfizer, which makes the first drug to be approved for fibromyalgia, the seizure pill Lyrica. Pfizer gave nonprofit groups $2.1 million in 2008 to "educate" doctors about fibromyalgia and financed PSAs (Pharma Service Announcements) depicting sufferers describing their symptoms without mentioning a drug. Lyrica now makes $3 billion a year.

Still, Lyrica has to fight Cymbalta, the first antidepressant to be approved for fibromyalgia. Eli Lilly pre-positioned Cymbalta for the physical "pain" of depression in a campaign called, "Depression Hurts," before the fibromyalgia approval. Treatment of a fibromyalgia patient with either Lyrica or Cymbalta hovers around $10,000, say medical journals.

Sleep disorders are a goldmine for Pharma because everyone sleeps -- or watches TV when they can't. To churn the insomnia market, Pharma rolls out subcategories of insomnia like chronic, acute, transient, initial, delayed-onset, terminal, early-morning, menopausal and the master category of non-restful sleep. This fall, Pharma rolled out a new version of Ambien for "middle-of-the-night" insomnia called Intermezzo, even though Ambien is paradoxically notorious for middle-of-the-night awakenings: people "waking up" in an Ambien blackout and walking, talking, driving, making phone calls and eating food.

Many became aware of Ambien's "lights-on-nobody-home" effect when former Rhode Island Representative Patrick Kennedy drove to Capitol Hill to "vote" at 2:45 a.m. in 2006 on Ambien and crashed his Mustang. But it was Ambien's EWI effect -- eating while intoxicated -- not DWIs that gave the pill its worst rap. Fit and sexy people awoke amid mountains of pizza, Krispy Kreme and Häagen-Dazs cartons consumed by their evil twin, on Ambien.

Needless to say, people with insomnia won't be bright eyed and bushy-tailed the following day -- whether they didn't sleep or whether they have sleeping pill residues in their system. In fact, they are actually suffering from the under-recognized and under-reported epidemic of Excessive Daytime Sleepiness. The main medical causes of EDS or ES are sleep apnea and narcolepsy, but last year Pharma rolled out a lifestyle cause caused "Shift Work Sleep Disorder." (No, it doesn't meant you can't sleep because your partner "shifts" in his or her sleep.) Ads for Provigil, a Schedule IV stimulant that treats EDS along with Nuvigil show a judge in his black robe, nodding out on the job with the headline "Struggling to Fight The Fog?" ("Yo! Your Honor! I'm trying to plead!")

Of course, wakefulness agents contribute to insomnia, which contributes to wakefulness problems in a kind of perpetual pharmaceutical jet lag. In fact, the sleeping pill/alertness aid habit is so common, it threatens to create a new meaning for "AA" -- Adderall and Ambien!

Insomnia That is Really Depression

Sleep disorders have also given a new lease on life to antidepressants. Doctors now prescribe more antidepressants for insomnia than they do sleeping pills, according to CNN. They also often combine them, since "insomnia and depression often occur together but which is the cause and which is the symptom is often unclear."

WebMD agrees with doubling the drugs. "Depressed patients with insomnia who were treated with both an antidepressant and a sleep medication fared better than those treated only with antidepressants," it writes. Ka-ching.

In fact, many of the new blockbuster diseases from adult ADHD and RA to fibromyalgia are treated with new drugs piled on top of existing ones that aren't working, a Pharma contrivance called polypharmacy. It brings to mind the store owner who says, "I know that 50 percent of my advertising is wasted -- I just don't know which 50 percent."

This article first appeared on Alternet.org

Martha Rosenberg's first book, "Born With A Junk Food Deficiency: How Flaks, Quacks and Hacks Pimp The Public Health," will be published by Prometheus Books this spring.