As Pharrell Williams gears up for the March 3 release of his second-solo studio opus, “G I R L,” the “Happy” crooner has faced a bit of controversy from unhappy fans and their reaction as it pertains to the album’s cover.

Since revealing the project’s artwork in recent weeks, which features three bathrobe-clad women standing beside the hitmaker, many have expressed their disapproval over Williams’ failure to include a black woman among the sexy ensemble. 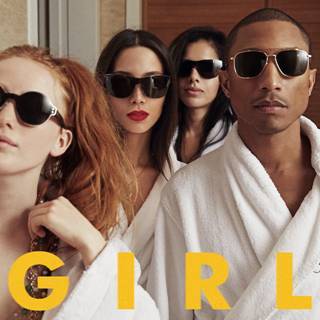 However, despite the sudden backlash, on Wednesday the multifaceted Grammy Award-winner responded to the controversy during an interview with celebrity gossip site, TheYBF.com, as he revealed how there is indeed a “black” woman featured on the cover.

“They’re ill informed. The woman I’m standing closest to, she is black and she’s been a friend of mine for a long time. You know, I’m confused by it,” the Oscar-nominee admitted. “Then they’re going to ask me ‘do I not have an Indian woman on there or a Pakistani woman on there?’ But meanwhile, I do. She is African American and I feel sorry for her that people will look her dead in her face like ‘she ain’t black,’ but she is black. It’s a girl I use to date years ago.”

“It’s just unfortunate because it’s 2014 and we have a President [who’s black],” Williams continued to explain to the site. “Is this what it is? Is it because she’s not brown? I don’t feel funny about our President because he is what he is."

"Meanwhile, has anybody forgotten that I’m black myself? I wake up everyday and I wave the black flag. Everything that I’m doing. You know, this ‘Happy’ song going #1. What is the guy that’s singing the song? What do you mean?”

Read more of Pharrell’s interview, including his thoughts on how black women influence his life, here.