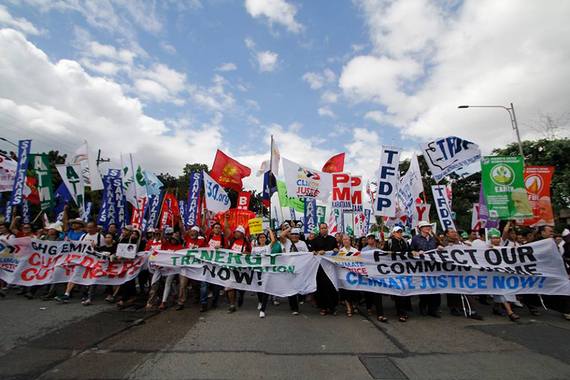 THE TIDE IS RISING: 20,000 Filipinos gathered for the largest march for climate justice in the country's history before the December 2015 Paris Talks. (c) 350.org

"Crash in Ph Mining stocks this morning. There go the coal plants too. Can't look."

These were the words tweeted by Manny Pangilinan, the CEO of the Philippines' biggest utility Meralco, which heavily invests in coal plants. Mr. Pangilinan is one of the top business tycoons in the country and his tweet was in reaction to incoming President Rodrigo Duterte's announcement that environmentalist Gina Lopez had been offered the position of Secretary of the Department of Environment and Natural Resources (DENR). His Tweet is just a glimpse of the degree of reaction from the mining and coal industry to this development and the possibilities that are likely to unfold.

Ms. Gina Lopez is a well-known environmentalist and vocal anti-mining advocate. In recent times she has lent her voice and support to affected communities and the broad movement in calling for the phase-out of coal plants and coal mining in the country.

In one of her live interviews after officially accepting the offer to head DENR, Ms. Lopez candidly criticised coal use in the country. She argued against using coal when there is an abundance of solar, wind, and geothermal energy in the country, and against the use of an outdated and dirty energy source which many countries are already phasing out.

The DENR is a crucial agency for those wishing to construct new coal plants. No project can move forward without an Environmental Clearance Certificate (ECC) from the Department, therefore Ms Lopez's appointment signals grave days for the coal industry in the country.

This development follows last week's launching of an all-encompassing energy policy review being spearheaded by the country's Climate Change Commission. The review intends to develop a clear policy on coal-fired power plants.

The Climate Change Commission asserts that "transitioning away from coal is a cost-effective path to a low-carbon economy" for the country. And that "while the Philippines is not a major emitter of GHG, it cannot allow its economy to grow with the ways that triggers the climate crisis, which affects the country and other vulnerable nations."

The Philippines is at a crossroads as to whether it will pursue the previous government's high-carbon path, or change course to tap the large potential of renewable energy in the country and align itself in accordance with its commitment to the Paris Climate Agreement to limit global warming to below 1.5 degrees. 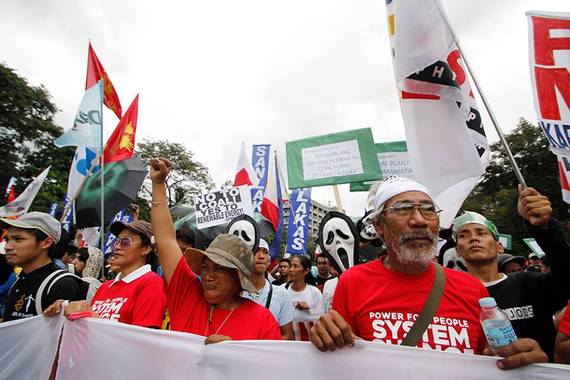 THE LONG WALK TO FREEDOM: Last November 2015, communities from the longest-running mining operations in the Philippines marched​​ 178 miles to the nation's capital demanding justice for the 30 years of environmental destruction in Semirara, Antique. (c) 350.org

Prospects on the energy review and the Lopez appointment

The energy policy review, which is aiming to be completed before the next Global Climate Summit in November of this year, has the potential to curb or put a cap on coal use in the country, at a minimum, or trigger an immediate phase out of coal. Either way, it will be a major step forward in the eventual energy transformation in the country in favour of renewable energy.

The review will examine what policy shifts will be needed in order to move away from a reliance on coal in the country, and to ramp up renewables.

This impending policy review, combined with the Lopez appointment, could result in a virtual moratorium on the processing of new ECCs. Steps could also be undertaken by the new environment chief to review all recently granted ECCs. This is why the coal utilities are panicking.

At present, there are 19 coal plants that have been given ECCs that are not yet constructed and around four proposed coal plants still without environmental certificates.

Days prior to the official launching of the energy policy review and appointment of Ms. Lopez, another major development took place in the country in the fight for energy transformation. A call for 100% renewable energy before 2030 was launched and was dubbed as a declaration of independence from fossil fuels. The event was led by one of the pioneers of solar energy in the country, Solar Philippines.

The company issued a call to other power companies to shift away from coal. According to Leandro Leviste, the head of Solar Philippines, "Remaking our power supply will be capital-intensive, and can't be done by one company alone. There is room for all companies now planning coal to switch to solar, as well as new players to join in, bringing competition and scale to the market, further bringing prices down."

Solar Philippines argued that solar costs have already fallen by 50% in the country due to economies of scale, vertical integration, advances in technology, and increased market maturity. In 2013, only 4 MW of solar had been installed in the country, and by mid-2016 this had grown to 900 MW. Solar Philippines recently announced a plan to establish the country's first local solar manufacturing plant.

This announcement adds to the declaration from a major energy utility, the Energy Development Corporation, last month that they would never develop, build or invest in any coal plant and will massively ramp up renewable energy. In the Philippines, change is starting in the private sector as more and more companies are shifting away from coal. 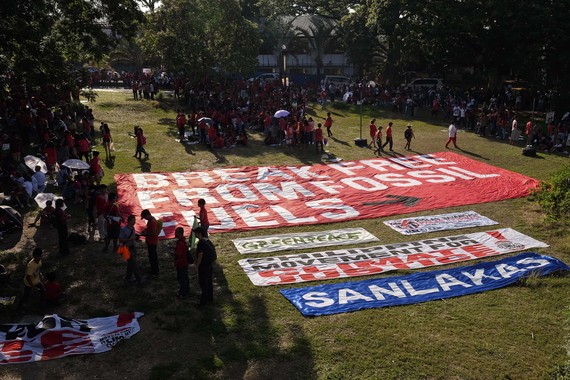 END COAL NOW: In lieu of the proposed 600 MW Batangas City Coal-Fired Power plant, 10,000 Filipinos gathered in the City to reject its construction and break free from coal last May 4, 2016. (c) 350.org

A day before the appointment of Ms. Lopez was announced, one of the proposed coal projects in the pipeline, in Batangassouth of Manila, was endorsed by the local government with a 6-4 vote in favor of its construction despite the massive opposition in the city and province of Batangas.

While this news is disheartening, all is not lost. It is just a phase in the anti-coal struggle in the country.

In May 2016, during the global Break Free actions led by 350.org, around 10,000 people marched through the city of Batangas to voice their opposition to the proposed 600MW coal project in the city, and all coal projects across the country.

Actions both through legal and meta-legal strategies are now being contemplated by campaigners in Batangas and the rest of the country to address these setbacks on the ground.

The broad anti-coal movement in the country has grown so much that one momentary defeat can no longer dampen the overall spirit of the movement to rid the country of coal.

With the three positive developments - energy policy review, the Lopez appointment, and the 100% renewable energy declaration, and the on-going resistance on the ground - momentum is on the movement's side.

It is noteworthy to mention that these developments are directly and indirectly a product of a long-drawn and painstaking struggle of the broad anti-coal movement in the country, employing multi-dimensional and multi-level approaches and strategies.

Exciting times ahead. Time to turn up the heat.