No one could keep up with Phil Mickelson in the final round of the 2013 Open Championship. In a finish for the ages at Muirfield, the 43-year-old American birdied four of the last six holes to win the British Open.

"I'm playing some of the best golf of my life," Mickelson told Tom Rinaldi of ESPN after finishing his day. "Today was one of the best rounds I've ever played."

All-time finish by Phil, who birdied 4 of the last 6 to shoot a final-round 66. Low round of the day. #Legend #TheOpen

Mickelson finished at 5-under par for the final round and 3-under for the Open. He began the day five shots off the lead before surging ahead with his epic finish. By lifting the Claret Jug for the first time, Mickelson has won five career major championships. Mickelson had previously won The Masters on three occasions and captured the PGA Championship in 2005. Of perhaps equal note, Lefty also arrived at the British Open with six second-place finishes at the U.S. Open on his resume. He began play at Muirfield just weeks removed from his latest heartbreaking runner-up performance.

"I have quite different feelings and emotions now then I did just a month ago," Mickelson told Rinaldi when asked to compare the 2013 U.S. Open at Merion to Muirfield. "This is just an incredible high, Tom. I didn't know in my career if I would ever develop the game as a complete player to win this championship, growing up not ever playing it. I can't explain the feeling of satisfaction and fulfillment to win this tournament. Today's round will be one of the most memorable rounds of golf I've ever played."

After sinking his 10-foot birdie putt on 18, Mickelson raised both arms in the air in celebration. He then shared an emotional embrace with his family. That birdie on 18 was his sixth of the final round and all but guaranteed Mickelson's name would be engraved on the Claret Jug. After two birdies in the front nine (5, 9), Mickelson caught fire down the stretch and birdied 13, 14, 17 and 18.

"I putted soooo good," Mickelson said, via The Associated Press.

At that point, Lee Westwood was the only golfer still on the course with a chance to match the 43-year-old American. He did not, bogeying the 16th hole and recording par on the 17th and 18th.

Westwood began the final round with a two-shot lead over Tiger Woods and Hunter Mahan. Looking for his first major championship, Westwood carded a 4-over par 75 on Sunday to finish tied for third. He managed just one birdie against five bogeys in the final round.

"Phil must've played really well," Westwood said, via The Associated Press. "Five-under par is a good round of golf this afternoon."

"It was frustrating," Woods told reporters after his round. "I played well. I could just never get the speed right today. We started on the first day and it progressively got slower. That's usually the opposite at most tournaments. It usually gets faster as the week goes on, but this week was different. I had a couple of opportunities to make a couple of putts and I left them short."

As Westwood, Woods and Mahan faded during the final round, Ian Poulter climbed up the leaderboard. The 37-year-old finished with a 67 on Sunday and moved up to 1-over for the tournament, good for a share of third place along with Westwood and Adam Scott. Henrik Stenson of Sweden finished the Open at even par, the closest to Mickelson of anyone in the field.

After finishing his round, Poulter took to Twitter to weigh in on his round, the fans at Muirfield and the performance of Mickelson

I think Michelson has probably done enough. I gave it a good go. That's all you can do on a Sunday at the @The_Open. Thanks for the support. 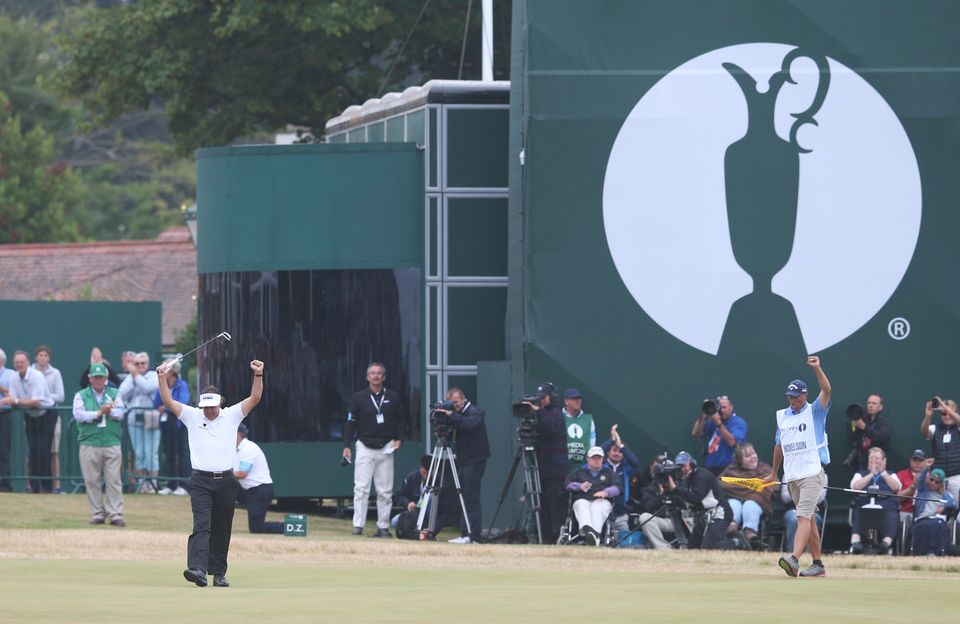 1 / 255
Phil Mickelson of the United States celebrates after his final putt on the 18th green during the final round of the British Open Golf Championship at Muirfield, Scotland, Sunday July 21, 2013. (AP Photo/Scott Heppell)
AP