AUGUSTA, Ga. - Lee Westwood joked earlier this week that Augusta National Golf Club, home of the 76th Masters, is “Disneyland for adults.” If that’s the case, expect Phil Mickelson to be first in line at every ride.

Fred Couples says his pal Phil walks around the Masters as if he’s strolling through a park. Ol’ Lefty loves the National, and his joy was quite evident on Friday. He had to fight just to stay alive in the tournament one day earlier; Friday’s second round was an opportunity to work his way back into red numbers – and back into contention, too. And with six birdies and a round of 4-under 68, one of the day’s best, he checked off both categories.

“To be only three (shots) back heading into the weekend, it feels great,” he said.

It should. Mickelson stood on the 11th tee late Thursday afternoon at 4 over, his weeks of preparations and ambitious plans to make a run at a fourth green jacket twisting in the tall pines. In the 26 holes he has played since, Mickelson is 6 under, and very much in the mix. At 2-under 142, he is very much a factor.

Frankly, it’s exactly where he expected to be.

“I do love playing here,” Mickelson said. “I do feel relaxed and I do feel like I can get away with some loose swings, which is a nice feeling.”

His errant swings were few and far between on Friday, though he definitely had a few. He made par from the left trees on 8, and from the right trees at 14, and from way left at 17, where his tee shot wound up closer to the seventh fairway than the one he was intending to hit.

He hit three more greens in regulation (11) than he did a day earlier, and most importantly, he continued to make key putts. (“I’m putting really well – and you haven’t heard me say that in a while,” Mickelson said.) On 10, he had a chance to get to level par but rolled a 20-foot uphill putt 6 feet past the cup. He made the comebacker. At 17, after hitting a nice recovery to the back-left fringe, he ran his first putt 12 feet past, then buried the next one. For momentum, those putts are huge.

The main difference between his opening 74 and second-round 68? Strategically, he made sure not to put himself in the tough spots he kept finding on Day 1. His misses were in places where he could still recover with par.

“And because of that,” Mickelson said, “I didn’t throw shots away like I did yesterday.”

He came to 18, a hole that has given so many players nightmares over two days, ripped a good drive and curled a nice approach shot that finished 15 feet left of the hole. Rick Smith, Mickelson’s former instructor and still a good friend, stood behind the green and watched his former pupil settle over his putt. Smith laughed to himself. He knew waiting to hear a birdie roar would be a mere formality.

“He’s definitely making this,” Smith said before Mickelson drew the putter back. “He loves Saturdays at Augusta, and this putt gets him one shot closer to the lead. Who knows? He could be leading this thing by the time he gets to (No.) 15 tomorrow.”

The putt went down, and Mickelson’s left fist went up. It was his sixth birdie of the day in a round played amid tricky, swirling winds. The course is still playing soft and receptive, and Mickelson will be rooting for it to grow firmer and faster on Saturday. If that happens, in this, his 20th Masters, his experience will shine.

He methodically plods his way around Augusta as if he’s playing a game of chess, countering every hole location, every wind direction, with some thought-out, erudite move of his own. Mickelson stood on the 16th tee for what seemed like an eternity. He swapped irons with caddie Jim “Bones” Mackay, waited, watched the tops of the trees, waited, rechecked the wind, waited, swapped clubs again, and finally hit a beautiful shot about 8 feet below the hole. Swede Peter Hanson, playing alongside in only his second Masters, appreciated the education.

It’s all part of the Mickelson Way, an act played out on an April stage he absolutely adores.

“He has really taken ownership of this place,” Smith said.

For all the attention given the back nine on Sundays at Augusta, Mickelson knows the value of Saturdays at Augusta National, too.

And if he does that, he’ll guarantee his Sunday at Augusta will be special. With him, win or lose, they always are.

PHOTOS: Round 2 At The Masters

PHOTO GALLERY
Masters 2012, Round 2
Download
Calling all HuffPost superfans!
Sign up for membership to become a founding member and help shape HuffPost's next chapter
Join HuffPost

Phil Mickelson In Masters Contention After Strong 2nd Round At Augusta National (PHOTOS)
Masters 2012, Round 2 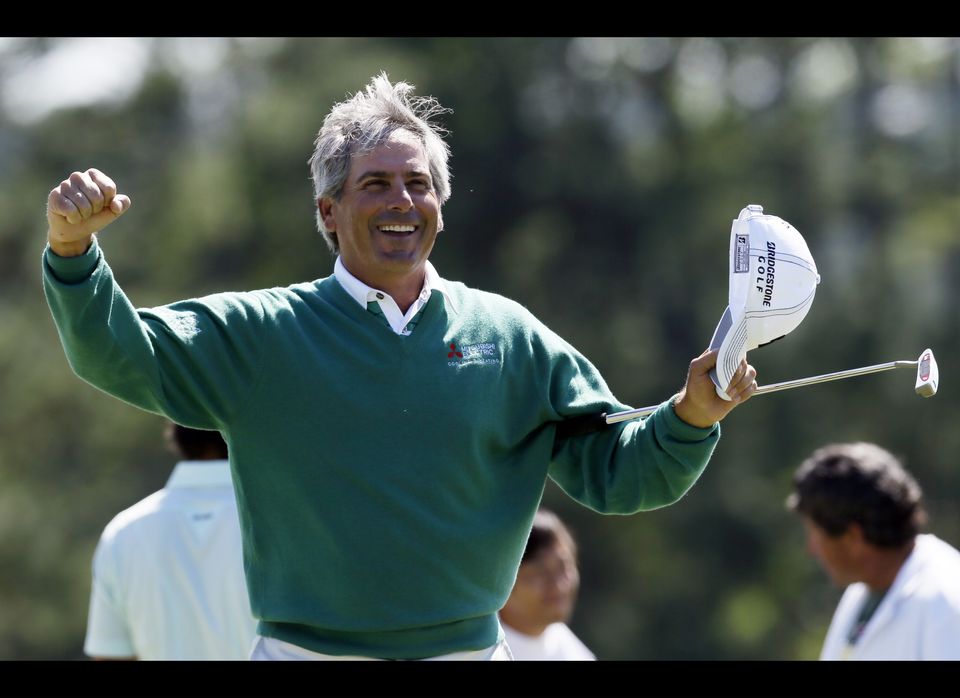