In 2009, I had the privilege of speaking at the Arthur Kill Correctional Facility on Staten Island, New York, at their World AIDS Day event. I shared my personal journey of being diagnosed with HIV and how the virus changed my life. I also urged the inmates and other attendees to know their HIV status.

The medium-security facility was closed in 2011, but I'll never forget my visit -- it was the first time I had ever been in a prison. Even though I was only visiting, I was keenly aware that I was behind bars. Not being an inmate, I had the right to leave at any time, of course. Nonetheless, I couldn't just walk out whenever I wanted. On the smallest of scales, my sense of freedom was challenged. 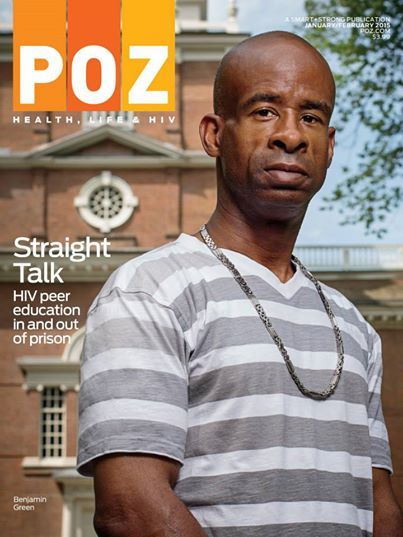 That experience made me appreciate even further the resolve of activists who willingly get arrested and incarcerated as a result of their civil disobedience. What that experience mostly did, however, was clarify for me just how fortunate I was, statistically at least, for never having been incarcerated.

According to the Centers for Disease Control and Prevention, an estimated 1 in 7 persons living with HIV pass through a correctional facility each year. Philadelphia FIGHT, an HIV/AIDS group, became aware of that statistic after realizing that lots of people seeking its services were arriving from jail.

Benjamin Green, a former inmate and our cover guy, regrets walking by FIGHT's open doors years ago. "I let that opportunity pass because of my own prejudices and fear," he says. Green overcame his concerns in 2013 by co-founding the Positive Men's Initiative, a group for straight men living with HIV.

Advocating for HIV peer education programs in and out of prison is a key part of what Green and others believe can make a difference in the epidemic. Click here for more about their efforts.

The conversation on HIV and incarceration takes a different tone when the virus itself is the subject of criminal law. A fraction of the total number of people living with HIV are behind bars because they were prosecuted under laws that target HIV. Some activists argue that many, if not most, of these individuals are serving time for actions that should not have been criminalized in the first place.

Aside from the legal arguments for and against HIV criminalization, there is often a stumbling block for many people familiarizing themselves with the topic: Does the criminal law have any role in the exceedingly rare cases where people are allegedly seeking to transmit HIV to others without their consent? Click here for an in-depth analysis.

Freedom from being born with HIV is one of the key goals of the Elizabeth Glaser Pediatric AIDS Foundation (EGPAF). The group, which marks its 25th anniversary, was founded by its namesake, who unknowingly passed the virus to her two children. To learn more, click here to read our Q&A with EGPAF president and CEO Charles "Chip" Lyons.