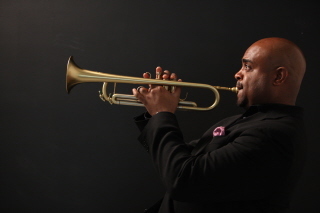 
Kicking off the new year with a jazz bang, the multi-generational Philly veterans and vanguards will be onstage to launch Jazz Orchestra of Philadelphia. Trumpeter and JOP's artistic director Terell Stafford has assembled an all-star line-up for the premiere benefit concert dubbed "Coming Home" in Verizon Hall on January 7. Stafford is Director of Jazz and Instrumental Studies at Temple University. He is not only the standard bearer, but part of Philly reclaiming its storied jazz heritage.

"It's very exciting for me because we are going to do music that represents Philadelphia. We are performing music by McCoy Tyner, Benny Golson, Jimmy Heath, Philly's Lee Morgan, and Odean Pope. We're also going to do Duke Ellington, which Wynton will be featured on. Music from Randy Brecker and a Monk composition that will feature Kenny Barron. Saxophonist Larry McKenna was kind enough to do an arrangement for Perdido, his trio with Tony Williams, Bootsie Barnes. It's really a well rounded program," Stafford promises.

"This is the orchestra's first performance in a major concert hall. We did a warm up at City Hall, to get our feet wet," Stafford said. He brought the A-list group together specifically for this date. "Some musicians I asked, Christian McBride and Benny Golson, weren't available for the date, but wanted to do it, but really everyone I asked were enthusiastic about volunteering their services."

When he is not performing or recording, Stafford is immersed in the Temple University music program which he observes. I've never been so proud to be associated with an institution before and it's mainly because of great colleagues. We do a lot of master classes and clinics. So the students get to find out what is going on in the world of jazz and classical, chamber, opera and choral music. The more exposure to that real world of musicians now, the more success they will have when they graduate," Stafford said.

Perhaps the most senior jazz member for the concert will be the legendary saxophonist Jimmy Heath, who is playing better than ever. If he is making adjustments for age, Stafford says, "You cannot tell. I just had Jimmy at Temple University. He was a guest in the big band concerts and all of the students wrote me emails how incredible he was as a mentor... how willing he was to share stories and give his energy," Stafford said. concert JOP will be performing Heath compositions 'Voice of the Saxophone and Gingerbread boy."

"These musicians are not only some of the greatest musicians residing or from Philadelphia, but they are great friends and that makes the music special. Making music with people who believe in you and you believe in them, that's when magic happens onstage," Stafford observed.

Stafford is thrilled that Bill Cosby is here to host JOP first concert. "Another legend onstage, definitely. I worked with Mr. Cosby for years on You Bet Your Life and he was a huge influence and mentor. He's supported me along the way as much as possible. The concert has a surprise finale which Stafford wanted to keep secret but did allow that "I think it will be a survival test for Terell..."