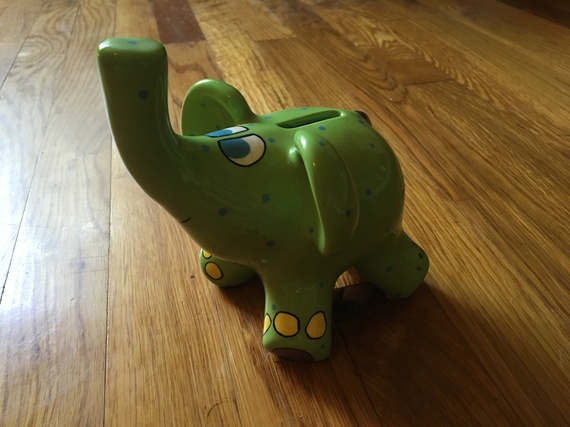 My friend Oli, age three, is a philanthropist. Maybe not on the scale of Bill and Melinda Gates, but what were they doing when they were three? Probably not donating 100% of their disposable income to their favorite charities.

Which is what Oli did recently, making him my current favorite philanthropist.

This adventure started when Oli's bank, something that gives him great pleasure, reached its saturation point. Oli's bank is an apolitical elephant bank. Oli had been stuffing it with coins received in Easter eggs (the Easter bunny has taken a capitalist turn since I last knew him) or acquired when there was small change from the dairy store, etc. So he enlisted his grandparents to accompany him to the bank, where the bank was relieved of its coinage. The elephant lived to start a new collection career, and Oli took possession of $32.60.

Next, Oli conferenced with his parents about the highest and best use of his $32.60. Right off, he chose his two favorite charities as beneficiaries: the local library that is one of his all-time favorite places in the world, and Mount Nittany Medical Center, which he refers to as "My Hospital." Oli came into the world at Mt. Nittany, and a few months ago his baby sister Helena did the same. The first experience was significant to others, but the latter was the high point of Oli's year.

Oli has already had a thank-you letter from the director of his hospital, advising him that he is officially their Youngest Donor. His $16.30, the director said, will be used to buy needed equipment to help the nurses and doctors who deliver babies there.

A grown-up fan of Oli's, who knows a little about nonprofits and fundraising, subsequently matched his gifts. Thus the elephant bank's impact has doubled, and the library and hospital have now netted $32.60 each, for a total economic impact of $65.20.

Admittedly, $65.20 won't change the world today. And Oli may well find something more entertaining to do with his overstuffed elephant bank by the time he turns four. But this seems to me what philanthropy is about: choosing to forgo some small pleasure (half of $32.60 could, after all, have bought a nifty toy and an ice cream cone) and instead show support for some worthy cause that is near and dear to your heart.

Feel free to send a check for $32.60 to your favorite cause, with or without a note that it is an Oli matching gift. Who knows? The elephant bank movement could make the world better