October is National Domestic Violence Awareness Month, and we need to discuss some numbers.

From September 11, 2001, to June 6, 2012, more American women were killed by intimate partners than all of the victims of 9/11 plus all of the American military fatalities due to the ensuing wars in Iraq and Afghanistan, combined. The numbers aren't even close. According to the FBI, 11,766 women lost their lives to domestic violence during the years that 6,614 citizens and troops were killed in terror attacks and war. 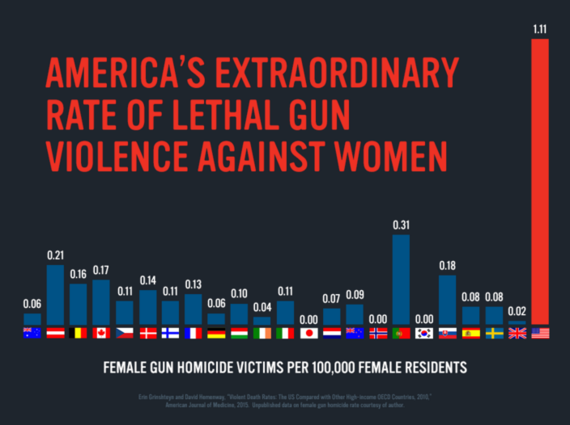 If you already knew this, you are among a small minority of Americans. If you are shocked, you are probably among the majority of Americans who have a rudimentary understanding of the high rates of violence against women in so-called third-world countries, but not of the problem it is here.

It's true that many more women are killed halfway around the world and that domestic violence in the U.S. pales by comparison. But it's not a zero-sum game. Pointing out the greater number of murders elsewhere is often a method of deflecting attention from what's happening in our own backyard. It's so much worse, we are told, to be a woman in Afghanistan or India. We shouldn't overreact to the 11,766 murdered American women in the decade after 9/11, plus however many more have been killed since then. Their families would disagree.

One in every four women is the victim of severe physical violence by an intimate partner at some point in her life. This has probably been going on since our first human ancestors, standing upon two legs, started walking around Africa three million years ago. If only "Lucy" were available for comment.

I am a new member of the board of directors of the Jeanne Geiger Crisis Center in Massachusetts, and I'm learning a lot. We offer safety planning, legal assistance, counseling and various other supports to victims of domestic violence -- mostly women and children, but some men as well. Our COO, Kelly Dunne, developed a program called the Domestic Violence High Risk Team Model, based on research on the lethality factors in high-risk domestic cases (covered in 2013 in The New Yorker). If homicide can be predicted, it can be prevented. This methodology is now being implemented in Massachusetts and elsewhere in the country.

Pointing out the greater number of murders elsewhere is often a method of deflecting attention from what's happening in our own backyard.

Fundraising for domestic violence is not glamorous. In the competition over donor dollars within a community, DV organizations cannot afford to put on Gatsby-esque masquerade balls the way museums might. DV fundraising events don't usually lend themselves to pretty Instagram photos. If you go to a philanthropic gala at the Met and post pictures of yourselves in gowns and tuxedos drinking champagne, you'll get a lot of "likes" the next day on Facebook, but nonprofits like mine are not a part of that world. It wouldn't set the right tone anyway.

Economist Robert Reich notes that according to the Congressional Budget Office, in 2012, of $39 billion in charitable giving, $33 billion was given to operas, art museums, symphonies, theaters, private schools and universities. In other words, to nonprofits that benefit primarily the wealthy themselves while providing tax deductions. That left only $6 billion -- or 15 percent -- of donations going straight to people who desperately need help -- the poor, the sick, the wounded, the abused.

What does this say about us as a society? What does it say about the common assumption that private citizens can or will look out for those who do not have their advantages? What does it say about the motivations for charitable giving, and how the wealthy choose which nonprofits to support? Some causes are just a lot sexier. With domestic violence work, there are few naming opportunities and a similar lack of opportunities to rub elbows with celebrities.

When I hear people say that their city's symphony needs financial support just as much as a domestic violence shelter or a homeless shelter, I feel sad and cynical. I think about Robert Reich's article. I understand that society needs art and culture, but the literal saving of lives is not prioritized. The math of the financial distribution is bleak and damning. Harvard has an almost $37B endowment -- approximately the amount of money given annually to all nonprofits in America -- yet the college continues to rake in enormous donations while surrounding Cambridge, MA, has one of the highest rates of homelessness in the country, and has become an actual destination for NYC's homeless people. The irony is obvious -- isn't it?

It does not just happen to 'other people' or certain kinds of people. It is happening now or has happened or will happen to loved ones that we all know well.

If the rich want to "keep it in the family" when it comes to philanthropy, perhaps they could reframe domestic violence and other afflictions of the human condition as existing within their actual families, and therefore deserving of consideration as well. It was not until recently that women became more comfortable confessing their abortions, and most of us now know women who have had them among our circle of relatives and friends. The same goes for rape. There was even a time when cancer was whispered about but not discussed openly the way it is today. Now we have much more funding for cancer research.

There are many reasons victims of domestic violence are still invisible. They feel humiliated, they fear retaliation, they are victim-blamed for not leaving, they are judged as not having made good choices, and they may have children to think about. Their black eyes and broken bones, when we can see them, remind us that people -- mostly men -- cause this suffering, not God or chance. That makes a lot of people uncomfortable.

Since one in four women experience violence in an intimate relationship during their lives, we all have mothers, sisters, daughters or friends who comprise that statistic, but many of them hide it well. It does not just happen to "other people" or certain kinds of people. It is happening now or has happened or will happen to loved ones that we all know well.

So the next time you think about how to allocate your charitable giving, I hope you'll remember Robert Reich's analysis. By all means, donate to your favorite museums and the schools you attended. They need your support. But only $6 billion out of $39 billion for the social good? That's not good enough. Not good enough at all.

This piece originally appeared on Women You Should Know.

Lori Day is an educational psychologist, consultant and parenting coach with Lori Day Consulting in Newburyport, MA. She is the author of Her Next Chapter and speaks on the topic of raising confident girls in a disempowering marketing and media culture. She is also a member of the Board of Directors for the Jeanne Geiger Crisis Center. You can connect with Lori on Facebook, Twitter, or Pinterest.