A landscaper in Rockdale, Texas, believes he found the carcass of a chupacabra, but skeptics think it may actually be a coyote or raccoon with mange.

Philip Oliviera said he trapped the strange creature on his property in late May, and reported his supposed discovery of the mythical blood-sucking beast to the media on Friday.

Oliviera said it had skin textured like an elephant's hide, paws like a raccoon and unusually large hind legs.

"Having studied biology and spent a lot of time camping and hunting and fishing and being out in the wilderness, I've seen what I thought was everything -- around here, anyway," he told the Austin American-Statesmen,. "But this thing is like nothing I've ever seen."

Whatever it was appeared to be "very fat and healthy" too, Oliviera said.

Oliviera is keeping the creature in a fridge so that it can analyzed,.He allowed journalists with the American-Statesman view it in his freezer and will have tests run on the animal's DNA. But wildlife experts said.Oliviera is undoubtedly wrong about the species.

“It’s a coyote with mange,” Jonah Evans, a mammologist with Texas Parks and Wildlife Department, told the Austin American-Statesmen. “Most TPWD biologists have seen hundreds of similar photos, and there is no doubt about what it is."

Oliviera, who has a biology degree from Texas Christian University, said it's too large to be a coyote, according to the Atlanta Journal-Constitution. 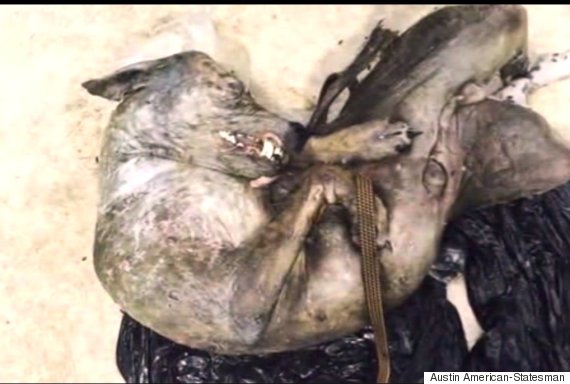 Even people who believe in the existence of the chupacabra are skeptical about Oliviera's specimen.

Phyllis Canion, a nutritionist from Cuero has a similar-looking creature preserved in her home that some think might also be a chupacabra.

After looking at photos of Oliviera's animal, she believes it's more likely to be a raccoon with mange.

"When you look at a raccoon without hair, it looks very different," she told The Huffington Post.

She hopes see the animal up close, but Oliviera hasn't responded yet.

Is This A Chupacabra?