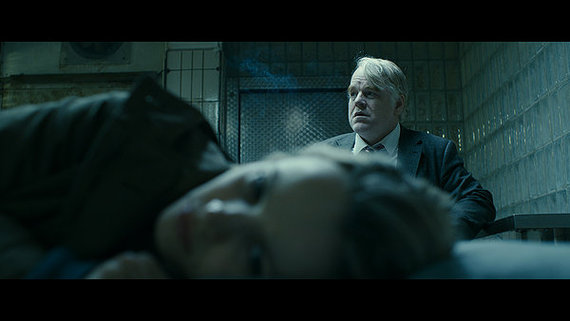 I first noticed Philip Seymour Hoffman's work in a serious way at Sundance in 1998, when he showed up in significant roles in two different films: Next Stop Wonderland and Montana.

Within a week or so of that, I saw an early screening of The Big Lebowski -- and there he was again, playing a very different character. By the end of that year, he would also pop up in Todd Solondz's Happiness and the sugary Patch Adams.

But it was that flurry of Sundance roles and the earlier Boogie Nights -- bringing visibility to an obviously talented actor with considerable range -- that put him on my radar. I was able to snag a freelance assignment from the Los Angeles Times to write what would turn out to be his first major profile.

I met and talked with Hoffman a handful of times in the subsequent years, the last time being in 2008, to discuss both Synecdoche, New York and Doubt. I just saw him in two films -- God's Pocket and A Most Wanted Man -- at this year's Sundance and anticipated the opportunity to speak with him again.