Philippe Sly is making his role debut as Figaro in San Francisco Opera's current production of The Marriage of Figaro. It's a perfect harmony. As Count Almaviva's personal man servant - and also friend - Figaro is the kind of guy one expects to find in the immediate circle of a fast living celebrity-type nobleman. Mozart assigned Figaro to the bass-baritone division - for potency and determination - and furnished him with three bright and buoyant arias that have helped keep the 1786 opera on today's Top 10 performance charts. Although Philippe's audition packet includes Figaro's Act I aria, Non più andrai, he admitted being a total newcomer to the complete opera. "I've heard bits and pieces of it," he said the day before opening, "but I've never seen a production." 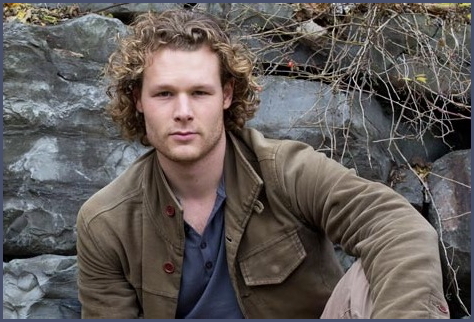 "Now I'm in love with it! Not knowing Figaro before was actually like discovering some sort of amazing treasure. And it's been a roller coaster! Figaro is an Everyman. I'm there as a kind of gateway between the audience and the other characters. I'm the people's man. Susanna is onstage the most, not Figaro. But he is the character the people are rooting for because he is the one with the dilemma."

Count Almaviva (Luca Pisaroni) can see Seville from his house. But at the moment, his gaze is leaning toward Susanna (Lisette Oropesa), his wife's personal maid. She is also Figaro's soon-to-be-spouse, that being about three and-a-half hours from now! Almaviva has suddenly and conveniently reinstated an old Tradition, the Droit du Seigneur - the Padrone's Prerogative - to bed any of his female servants at any time, including the day of their wedding. And who dares to stop him?

"This was normal at the time. What is abnormal is the fact that the Countess and her servant and Figaro get back at the Count without hurting him. They make it so he has no possibility of refuting how unfortunate his actions could have been and were. The play is very different from the opera in many ways. The political commentary has been taken out and it turns into an opera about men and women and their differences. Men are trying to control things and neither Figaro's or the Count's plans ever work. It's always what the women do that ends up becoming what works." 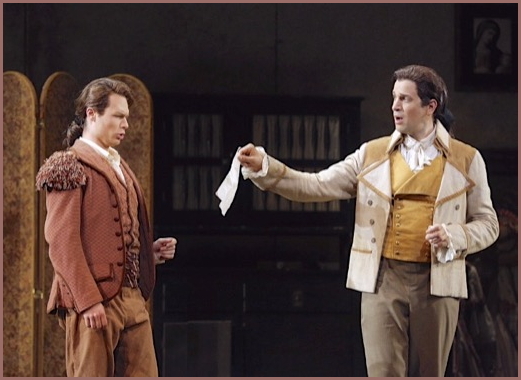 Two hundred and twenty-nine years since its premier in Vienna, Le Nozze di Figaro has accumulated a catalogue of performance traditions. Six of Philippe's fellow cast members have absorbed some of them in other productions. As the definitive Marcellina, mezzo-soprano Catherine Cook has had four go-rounds with this one. Crooning in her ear in 2010 was John Del Carlo as Dr. Bartolo and Luca Pisaroni sang the title role. This is tenor Greg Fedderly's third appearance as Basilio with San Francisco Opera. Vocally and comedically, Greg's characterization is sublime. Kate Lindsey has sung Cherubino at the Met and Lisette Oropesa's major role debut at the Met was as Susanna.

"I'm green, green, green. But I'm with all these amazing singers who have done it before - the knowledge they bring, showing how malleable the piece is, and the great amount of subtext. Mozart is amazing with that. I came into the rehearsal with too many ideas and I was trying to do them all instead of choosing one way to look at it, follow through with it, and be confident in it. Instead of refining, I was playing. That was the hardest part." 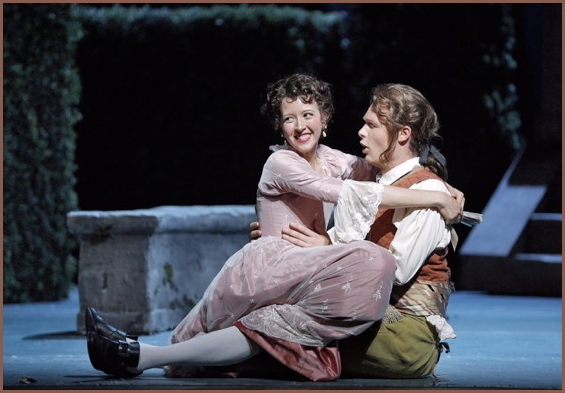 "Our rehearsal process was normal - two weeks to put it on. I could have used twice that time to just refine, to make it more specific to me. That process finally did occur, but it was tricky. It's not really about what take it is, but about being confident in what you are doing and letting that speak - not trying to have a gimmick here, get a laugh there. You can't help but react to what people are doing, to what is going on - that's there for you. It's a historical production, there's no deep subtext, nothing new. It's very real, very in the moment. It's so easy to try to do too much, to think that Mozart isn't enough. But it is enough. The question is, can you make it specific enough? There is a difference between doing a lot and doing something specific - clear, clean and that reads well. A choice that makes you think, that won't be whitewashed because it's a tradition. There are so many traditions with this opera - what you do in this moment and that moment - 'well, you know during the sextet this is supposed to happen and during that aria...' Whatever it is. It's about getting rid of that. And boiling it down to what is really happening and being very clear about it."

What is crystal clear - it's San Francisco Opera at its finest. Led by Principal Guest Conductor Patrick Summers, the tempos are kept lively and crisp, the recitative follows normal conversation and then sparkles on the applied embellishment. Making her directorial debut with the Company, Robin Guarino keeps us on point with every detour, counter scheme, disguise, and especially the bit about the Faux Drag in the room. Even better, how she builds up to the Dirty Little Secret. The cast bubbles in chemistry. The body language is real, the interplay is authentic. The production is the perfect choice for this year's Opera In The Ballpark - July 3, AT&T Park, starts at 7:30. The performance is broadcast live from the War Memorial. The close-ups on Nadine Sierra as Countess Almaviva are bound to score big-time. 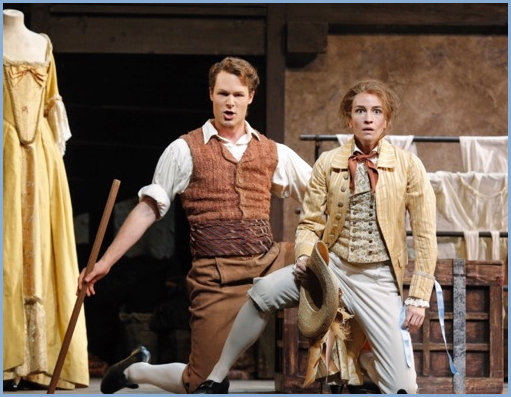 "There's a lot in this opera and the story itself speaks a lot. When the Count says, 'Perdono' at the end - some people laugh, thinking he's just faking it. What isn't fleshed out is that the Count and Figaro have this relationship - they're friends. That the Count would actually go so far as to betray his friend Figaro in doing this thing... The Countess and the Count envy Susanna and Figaro - the freedom that they relish in the limited freedom that they have as servants. It's sad. But the Count knows more at the end of the opera than he did at the beginning. The Countess pardons him - she knows there is something about them being Nobles that's preventing them from being real humans. I believe that is the success."