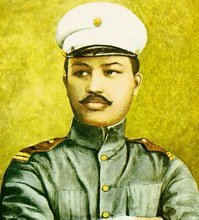 Writing for Foreign Affairs in 1968, Filipino national hero Benigno "Ninoy" Aquino lamented: "Almost half a century of American rule bequeathed to the Asian Filipino a trauma by making him uncomfortably American in outlook, values and tastes..." No wonder then, in one survey after the other, the Philippines has held the distinction of having the most favorable view towards the United States, its formal colonial master.

In the 2013 Global Attitudes survey, conducted by the Pew Research Center, as many as 85% of Filipinos expressed a favorable view of America, astonishingly beating even the Americans themselves (81%). By 2015, even a greater number of Filipinos (92%) expressed a favorable view of the global superpower. In one war after the other -- from the struggle against Imperial Japan during the Second World War to the proxy wars against Communism in the Korean Peninsula and Vietnam during the Cold War -- Filipinos stood should-to-shoulder with America. Without a question, if there were anything like a "loyalty award" for America's friends, the Philippines would have qualified as an undisputed contender.

Throughout the world, the United States is praised and/or envied for its cultural prowess (think of Hollywood), dynamic centers of innovation (think of Silicon Valley), and military muscle. In the Philippines, America is also broadly seen as a savior, a Knight in shining armor that has protected the island nation from bogeymen and menace of undemocratic ideologies. One can argue, however, that the Philippines's love affair with America is partly a product of its historical amnesia. For long, the glaring gap in the Filipino national discourse was the Philippine-American War (1899-1902), a heroic struggle for national independence, which Washington, quite hubristically, dismissed as an "insurrection".

It is this largely forgotten part of the country's history that "Heneral Luna" (2015), the Philippines' official entry for Oscars this year, tries to decipher. Choosing General Antonio Luna as its main subject, the movie manages to communicate the vast potentials as well as tragic outcome of the Philippines' quest for national independence -- and the predicaments of nation-building.

It is a movie not about aggrieved and aggressive nationalism, which Albert Einstein rightly dismissed as an "infantile disease" and "measles of mankind", but instead the moral logic of patriotism and the perils of divisive tribalism. Heneral Luna isn't a tale about morality per se, but instead an honest portrayal of the moral dilemmas of nation-building.

To be fair, within few decades of (overt) colonial rule, the United States managed to leave a larger imprint on modern Philippines than Spain, which brutally occupied the country for more than three centuries. As historian Arnold Toynbee described, the Spaniards held onto to the Philippines "by a handful of soldiers, administrators, and friars after the fashion of the Spanish empire of the Indies."

The Southeast Asian nation, after all, was America's showcase colony. Washington made a conscious effort to demonstrate that it wasn't just another Western imperialist. As award-winning journalist Neil Sheehan explains,"[h]aving overt colonies was not acceptable to the American political conscience", for the American people, who themselves had to valiantly revolt against British dominion, "were convinced that their imperial system did not victimize foreign peoples." Under America's rule, the Philippines saw the establishment of universal education, a modicum of modern infrastructure, and liberal democratic institutions. And it was this legacy that made the Philippines Asia's second least poor (or prosperous) country in Asia.

And even after its formal independence in 1946, the Philippines effectively outsourced its national security to the United States. In the words of James Fallows, the Americans led the Filipinos "to believe that they aren't really responsible for their country's fate." Thanks to a series of landmark agreements, namely the Military Assistance Pact (1947), the Military Bases Agreement (1947), and the Mutual Defense Treaty (MDT) of 1951, Washington became the de facto guarantor of (the nominally-sovereign) Philippines against external aggression. And despite the exit of American bases in the post-Cold War period, the United States is still seen as the Philippines' best hope against a revanchist China, which has been gobbling up contested features across the South China Sea at the expense of smaller nations such as the Philippines.

Such long history of dependence conceals a past where the Filipinos stood as a beacon of inspiration for nationalists across the world. In From the Ruins of Empire (2012), Pankaj Mishra shows how the Philippines' struggle for independence, first against Spain and later against the Americans, inspired nationalists across Asia. For scholars such as Benedict Anderson, the Philippines' nationalist movement, inspired by the works of Rizal, was a trailblazer in Asia, representing the first post-colonial struggle in the continent. As a biopic, Heneral Luna captures the zeitgeist of this noble period in Philippine history, when Western-educated Filipinos confidently demanded equality with the Western civilization and valiantly risked their lives to build an independent nation.

But the country's quest for independence was ultimately crushed not by the inept Spaniards, but instead the (supposedly) benign Americans, who the Filipino revolutionaries initially saw, quite naively, as dependable allies (against Madrid). Unable to independently consummate its right to self-determination, the product was a nation confused about its identity and place in the world, for the struggle for independence is also a struggle for self-identity. As Ninoy Aquino succinctly put it: "Filipinos are bewildered about their identity. They are an Asian people not Asian in the eyes of their fellow Asians and not Western in the eyes of the West."

America's profound influence on the Filipino psyche, particularly its ruling elite, is evident in the words of Salvador P. Lopez, former ambassador to Washington, who gave a positive spin to the Philippines' colonization by Americans, arguing that, among other supposed benefits, American colonization helped "Philippine society to develop along more democratic lines."

Among historical movies in the Philippines, it is quite common to detect strong anti-Spanish or anti-Japanese sentiments. What is unique about Heneral Luna is its unvarnished portrayal of not only American deceit -- striking a separate deal to purchase the Philippines from the Spaniards without the knowledge of their supposed Filipino allies -- but also its brutality towards Filipino civilians.

The Philippine-American War led to the death of hundreds of thousands of Filipinos, many of whom were ordinary civilians who couldn't cope with the starvation and misery brought about the protracted conflict. There were also wanton use of violence by American soldiers, while others seemed to relish their defeat of Filipino revolutionary forces with sadistic glee, with one solider describing the slaughter of fleeing enemies as "more fun than a Turkey shoot". By invoking the doctrine of Manifest Destiny, President William McKinley sanctioned a colonial project to "educate the Filipinos, and uplift and civilize and Christianize them." The subjugation of the Philippines was veiled by sanctimonious imperialism and denigration of Filipinos as uncivilized people.

But far from a cheap anti-American movie, Heneral Luna is a contemplative artistic work that sheds light on the internal divisions that beset the Filipino revolutionaries; divisions that continue to undermine the country until this day. Raised in Manila, Ilocano on his father's side, and educated in the West, Antonio Luna was both cosmopolitan and patriotic. He was, in the words of American Generals James Franklin Bell and Robert Hughes, the Philippines' only true general. And he tried very hard to establish a modern and professional Philippine armed forces, which transcended tribal and ethnic allegiances.

It was his military genius that, in the initial stages of the war, inspired some sense of panic among invading Americans, who weren't expecting a sophisticated resistance by the indigenous population. A product of modern education, Luna used cutting-edge military tactics against the West, trying to beat them in their own game. Ultimately, however, General Luna was no George Washington. His temper, frustrations with insubordination, and traumas of war got the better of him. The movie painfully portrays his struggles with his inner demons, culminating in an incident where he wrongfully unleashed his anger on innocent bystanders, the very people whom he should have protected above all.

He was not an ideal leader, for he didn't appreciate the necessity for charm, persuasion and consensus-building when it comes to leadership. And, as Filipino historian Vicente Rafael explains, Luna and his revolutionary colleagues "never had a program for addressing social inequities.... never planned to redistribute land or to democratize social relations."

Yet, one can't deny how critical Luna was, despite all his frailties, to securing Philippine independence. Luna's harsh language (to ensure military discipline), constant resort to threats (to prevent insubordination and mobilize troops), and temper (over tribalism and divisions within Filipino leadership) should be seen within the context of the traumas of nation-building, especially when a fledgling nation is confronting one colonizing power after the other while struggling with vicious internal divisions.

From Eugen Weber's Peasants into Frenchmen (1976) -- which chronicles how dispossession and uprooting was central to French nation-building and its emergence as a superpower -- to Niall Ferguson's Civilization (2012) -- which chronicles Japan's disorienting and oppressive process of modernization under the Meiji Restoration that nevertheless secured the Asian nation's independence and dignity -- one is confronted with the uncomfortable truth that nation-building, especially in the 18th and 19th centuries, was an intrinsically violent process that sought to shift individuals' loyalty from their families and tribes to, in the words of Benedict Anderson, an "imagined community" called nation.

The brutal assassination of Luna by his fellow revolutionaries, who saw arrogance more than merit and prioritized personal vengeance above national independence, serves as a cautionary tale -- a reminder of how the Philippines' greatest enemy was (and is) not external predators, but instead internal divisions and narrow loyalties, which have stunted its nation-building quest to this date.