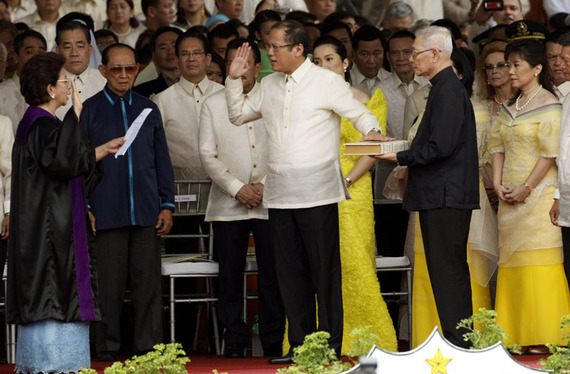 Genuine political reform is no easy feat, especially in a country like the Philippines, which has been dominated by a fairly coherent oligarchy for much of recent history. Since many powerful forces have a stake in preserving the status quo, real change demands extraordinary leadership, an element of luck, popular support, and immeasurable time and energy.

In a nation where forgiveness and forgetfulness are often interchangeable, the political elite -- despite its numerous mishaps and predatory behavior under various colonial masters in the past and, later, sovereign governments -- has managed to constantly rehabilitate its reputation, avoid full accountability, and prevent the kind of political purges, which jolted revolutionary France and reshuffled the political order in many other European, Asian, and Latin American nations in the following centuries.

Despite the formal "democratic" outer layers of its political institutions, the Philippines is fundamentally a country ruled by an unruly few, who have reduced one of the most promising nations -- blessed with an auspicious geography, among the most cosmopolitan cultures, countless natural riches, and among the fastest growing economies in the mid-20th century -- into an emaciated collective, which has struggled to graduate out of the lower-middle-income trap for decades.

Yet, the Philippines is also a nation of hope, anchored by a boisterous intelligentsia, a feisty and vigilant media, and a resilient population, which has withstood both man-made and natural disasters since time immemorial. It is a country that stood up against dictatorship, cherishes and instinctively strives for freedom, and constantly seeks peace and dialogue over conflict and exclusion.

It is a nation that has welcomed the persecuted from across the world with utmost generosity of spirit. It is because of the virtues of the Southeast Asian nation that "Ninoy" Aquino --- a democratic icon, who fought against the Marcos dictatorship -- never had any second thoughts with proclaiming "The Filipino is worth dying for." For "Filipino" and the "Philippines" stand for an idea -- a welcoming, cosmopolitan nation of freedom in a world filled with so much hatred, hubris and conflict.

In the final State of the Nation Address (SONA) of "NoyNoy" Aquino, Ninoy's one and only son, the Filipino president defended his record as the commander-in-chief of more than 100 million souls, who have looked up to him for leadership, direction, and conscientious governance in the last half-decade.

He seemed confident and self-assured, even uncharacteristically subdued, relishing the persistent applause among his audience. He delivered among the longest speeches I have listened to, primarily in Tagalog rather than English, which is the preferred language of most top officials.

The speech was a tour de force, at least in terms of defending his leadership record. Aquino highlighted key achievements, especially in terms of tax collection, dividends of state-owned enterprises, annual average growth rate, sovereign credit ratings, net Foreign Direct Investment (FDI) inflow, and the leapfrog in the country's competitiveness rankings under his watch. To disarm his critics, Aquino wasn't shy to cite international sources to back up the credibility of his figures and claims.

He also emphasized his determination to enhance the Philippines' minimum deterrence capability in light of rising territorial tensions in the South China Sea by modernizing the country's decrepit armed forces. He reiterated his pitch for the passage of the Bangsamoro Basic Law (BBL) in order to bring peace to the troubled southern region of Mindanao.

So, did he convince the nation -- supporters and critics alike -- that he brought about transformational leadership to the Southeast Asian country? There is room for skepticism, of course.

Over the past five years, throughout hundreds of articles and opinion pieces (you may check an overview of Aquino's struggles I penned for the Foreign Affairs magazine), I have dissected the various dimensions of his domestic and foreign policies. So I am not going to delve deeply into the many contentious aspects of Aquino's policies.

I would dare to argue, however, that Aquino should be, above all, credited for introducing a moral dimension to Philippine politics, a phenomenon I call Moralpolitik.

In fact, Aquino started his final SONA -- lasting more than two hours -- by reiterating his commitment (and success?) in curbing corruption, ameliorating the hemorrhaging corruption in state institutions. Under his watch, more than 700 corruption-related cases have been filed, with dozens of officials dismissed along the way.

During his speech, he proudly defended his choices for top government offices, portraying his inner circle (some facing corruption charges) and cabinet ministers as people of utmost integrity. There was also a veiled endorsement of Interior Secretary "Mar" Roxas, who is largely seen as Aquino's anointed successor. Towards the end, the SONA looked like the closing credits of a movie, where casts are recognized in proportion to the significance of their roles.

Like no other Filipino leader in recent memory, Aquino staked his political capital in a moral crusade against institutionalized corruption in the country. One can hardly find any comparable leader in recent memory, who has dedicated so much political capital to take on allegedly corrupt officials from all three branches of the government -- the executive, the judiciary, and the legislative.

He mainstreamed the concept of "good governance" (Daan Matuwid), constantly reiterating the importance of clean, accountable leadership. Almost singlehandedly, Aquino injected morality into the heart of the Philippines' long-cynical politics. He resuscitated pre-Machiavellian political philosophy, emphasizing the importance of ethical leadership in pursuit of collective good.

In fact, he has done the same thing in the realm of foreign policy, describing the Philippines' struggle against an expansionist China through the prism of "right vs. might". No wonder, the Aquino administration has invested so much in the ongoing legal arbitration at The Hague against China, when other claimant countries have mainly focused on proactive diplomatic engagement, robust military buildup, and consolidation of claims on the ground.

Obviously, we can have a healthy debate on how successful and impartial Aquino's anti-corruption initiatives have been in practice, but no one can deny how vigorously Aquino pursued powerful politicians, who were once seen as almost invincible not long ago. In short, Aquino "moralized" the country's broken politics and reintroduced an ethical discourse on the state of its rotten institutions.

Another thing Aquino should be credited for is his correct decision to continue macro-prudential economic policies from the past, which have stabilized the foundations of the country's economy, introduced an element of predictability into capital markets, and enhanced the country's attractiveness to international investors. Today, the Philippines is no longer seen as the "sick man of Asia".

But of course, the main problem with Aquino's economic policy was one of omission rather than commission. In absence of more creative, heterodox policies, the government fell short of ensuring that the growing economic pie will become inclusive. As a result, much of the newly-created wealth in the country has been swallowed by the elite, while poverty and hunger rates as well as un/under employment rates have virtually remained inelastic.

Without a major boost in agricultural (land reform is crucial here) and manufacturing sectors (greenfield investments is key), I am doubtful we will be creating inclusive growth anytime soon. Not to mention, we are yet to see a major upgrade in the Philippines' dilapidated infrastructure, which has discouraged foreign investors and burdened daily commuters.

From afar, it is easy to criticize the government. Some journalists and commentators have regrettably even resorted to ad hominem attacks against a leader, who was voted into power by millions of people and responsible voters. Aquino's opponents -- many belonging to the corrupt factions, which oppose "good governance" as an existential threat -- have used all sorts of strategies to demean him and undermine his popularity.

But there is a reason why Aquino remains to be a popular leader, especially when compared to his predecessors in their twilight years in office. Many Filipinos, as credible surveys consistently suggest, do credit Aquino for his good intentions, despite his many shortcomings in practice. You don't have to be an expert to realize that with the Philippines' weak state institutions, hobbled by entrenched networks of political patronage, and only a single six-year term in office, there is just so much a well-meaning leader can do to overhaul a broken political system.

Genuine reform and lasting change comes on the back of institutions and "effective governance", not personalities. Good governance will not be achieved unless Aquino's reforms and best practices are carried forward by his successors. Beyond defending his record, the SONA should have also been about promoting a lasting vision for the country.

Overall, Aquino may have not been a transformational leader -- constantly struggling with controversies and forces of corruption without and within the state apparatus -- but he has arguably served as a pretty defensible transitional leader, who may have laid down the foundation of a better future for the Philippines.

Next stop is about "effective leadership", translating Aquino's best intentions into tangible developments on the ground. Aquino's legacy is ultimately about beginning a new end, perhaps a better chapter for a long-suffering nation.

a shorter version of this piece was published on CNN Philippines.