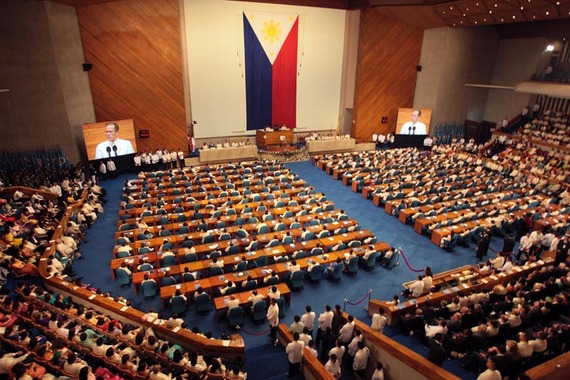 Though the formal campaign season is yet to kick off, the Philippines is already gripped by an election fever. By and large, the overall political atmosphere is beaming with optimism and hope; it is festive and lively rather than anxious and grim.

Thankfully, there are no Donald Trumps among likely candidates, so one can expect some measure of civility and political correctness among the contenders. At least in one aspect, the Philippines trumps its former colonial master, the United States, which bequeathed its (then) clientelist, shamelessly corruption-ridden political system (perfectly captured by Francis Fukuyama's Political Order and Political Decay) on a barely-developed Spanish colonial outpost in Southeast Asia.

Unlike in the past, particularly back in 2010, when the vast majority of the Filipino populace -- along with international partners and investors -- was more than eager to dispense with an allegedly corrupt leader and welcome a new chapter in the Philippines politics, the discussion today, however, hovers around continuing and building on the largely constructive legacy of the incumbent, President Benigno "NoyNoy" Aquino.

So far, there are no serious concerns over the possibility of a military coup (the armed forces are largely safe, content, and secure in the barracks despite the 'Mamasapano tragedy'), systematic campaign of electoral rigging and disenfranchisement (although automated elections are still treated with suspicion), or unconstitutional extension of the incumbent's term (Aquino didn't go beyond flirting with the idea of a second term in office, which was actually favored by vast majority of people).

A Beacon of Stability?

So we can expect, ceteris paribus, a smooth, constitutional and legitimate transition of power next year. This is good news, especially amid the political upheavals that have rocked neighboring countries in Thailand, Cambodia, and Malaysia. Celebrating its 50th anniversary, Singapore -- Southeast Asia's Sparta -- is steeped in a moment of reflection as it charts an uncertain destiny after the demise of its sole founder, Lee Kuan Yew (there is the reason why Kishore Mahbubani has provocatively chosen the title "Can Singapore Survive" for his latest book).

But in a country where there are no genuine mass-based political parties, no programmatic discourse on policy alternatives and their virtues, and extremely limited opportunity for grilling candidates on the specifics of their policy agenda, it is all about popularity. Often, it is extremely difficult to distinguish among candidates, who unanimously call for peace and prosperity, but offer little in terms of how they actually seek to achieve those lofty goals.

With so little known about the candidates' mettle, Walden Bello, the Philippines' leading sociologist, was particularly harsh in his description of leading candidates, describing one as a "hollow man", another as "blank slate" and "bad news" as for the other.

Philippine elections are sometimes more like a beauty pageant than a serious public affair. It is mostly about selecting motherhood statements, (numbing) jingles, and catchy buzzwords, which will resonate among voters. Not to mention, the power of family names -- especially in a country that sometimes looks more like a collection of little kingdoms and unruly dynasties under a weak emperor, rather than a modern, egalitarian society.

In essence, beneath its democratic shell, the Philippines is actually an oligarchy, where roughly 178 dynasties are ruling 73 out of a total of 80 provinces. No wonder then, why the country's economy is similarly oligopolistic, where 40 richest families swallowed almost 76 percent of recently-created economic expansion -- the most concentrated growth pattern in Asia.

As far as media coverage of the candidates is concerned, it is mostly focused on preference ratings of individual candidates and their "character" -- a mystical Freudian concept, which doesn't reveal much about their competence. The choice to run for presidency, as a leading Filipino political scientist Felipe Miranda (a former mentor) told me almost a decade ago, is determined not by the issue of competence, but instead popularity.

And this is precisely why survey ratings are arguably the most dominant factor in determining who enters the race, gets financial support from the bigwigs, and devours media coverage. Anticipating and analyzing preference ratings tends to keep pundits busy and dominate discussions, which are supposed to focus on the nuts and bolts of the candidates' track record and policy proposals.

Time and again, I have heard from many people that track record and experience isn't an indicator of good leadership. Some went so far as saying even educational attainment isn't as relevant, since many elite-educated presidents apparently ended up as corrupt and self-serving. For them, what matters is character, upbringing, and charisma -- three variables that have emotional resonance, but very difficult to rationally analyze.

The problem with this flimsy, if not dangerously jaded, argument is that it misses a basic lesson in critical thinking. Experience and education are 'necessary but not sufficient' components of effective leadership. Having experience and education alone will not guarantee success, but their absence will leave a leader at the mercy of political operators and manipulative advisors.

Thanks to Aquino's "Moralpolitk" -- the injection of moralistic discourse into the heart of political discourse -- people are beginning to cast aside politicians, who are mired in corruption scandals. But this is not enough. What are needed are not only squeaky clean candidates, but also those with a track record of competence.

But so long as 'popularity' is the name of the game, the voters and their choices will be largely shaped by surveys rather than in-depth assessment of the competencies and integrity of individual candidates. Given the gravity of the Southeast Asian country's challenges, both at home and in its near neighborhood (i.e., South China Sea), the Filipino electorate must choose the best possible candidate based on the best possible metric of assessment -- not jingles, slogans, and surveys.

Richard Javad Heydarian
Academic, policy adviser, and author of "Asia's New Battlefield: US, China, and the Struggle for Western Pacific"
This Blogger's Books and Other Items from...

How Capitalism Failed the Arab World: The Economic Roots and Precarious Future of the Middle East Uprisings (Economic Controversies)
by Richard Javad Heydarian

Asia's New Battlefield: US, China and the Struggle for the Western Pacific
by Richard Javad Heydarian