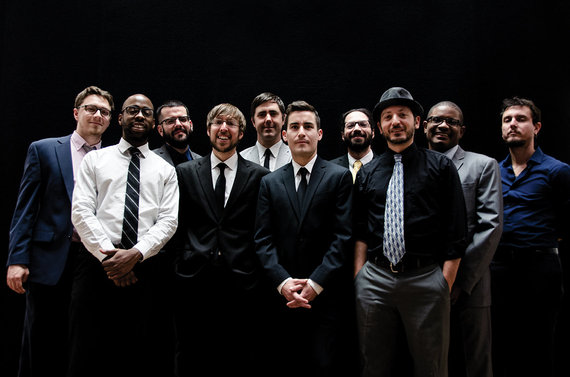 he 10-piece Fresh Cut Orchestra was born and hit the ground running and since then they have just recorded three albums and have been playing top venues including Lincoln Center's Dizzy's Club. Introducing the band for their Bride return to launch concert for their new CD "Mind Behind Closed Eyes" released late August and already getting heavy play on WRTI, Lawrence told the crowd it was "Great to be home where we started."

This is a young band has joyous camaraderie and a sense of musical occasion and adventure. For well over two hours they traversed a number of jazz genres, including their prowess that is steeped in big-band legacies.

FCO ignites jazz fusion, created by Miles Davis 45 years ago and mostly out of fashion since. This band weighs in with new compositional structures and ideas with especially aggressive jazz funk/ rock experimentation. They are equally exploratory with Latin jazz and America classicism and all along you get the distinct impression that their artistic prism is not only musically substantive but borderless. One of the connecting themes of this orchestra is that they careen into different jazz genres even in one number and it still makes all musical sense.

Among the random musical highlights on this night

To kick off the concert Jason Fraticelli ambled on stage playing a simple ballade he composed "My Summer in Puerto Rico" on the Cuatro, a four string folk guitar (an heirloom from his musician grandfather). Then drummer Anmar Marshall and percussionist Francois Zayas joins him and eventually, the rest of the band as the song builds to a gushing orchestral stream. Then the electric string percussive jazz rock jam of Fraticelli's "Mind Behind Closed Eyes" followed by "Gallo Y Gallina" an raucous adaptation of a Puerto Rican folkloric dance tune.

Fresh Cut conjured the jazz 'cool' atmospherics of the early 60s on "An Uptown Romance" from their first album "From The Vine" which features Lawrence's golden tones and lustrous phrasing on muted trumpet that hands off to Brian Marsella solo on piano goes stride blues territory and at several points with electric segues on his Rhodes keyboard. Later, on Lawrence shows equal compositional range with his Latin tune "Frederico," a rowdy horn and percussion salsa laced with Marsella's delirious piano runs and Mark Allen's lusty baritone sax.

The first set concluded with Anwar Marshall's compositions "Indecision" and "New Expectations" also from "Mind Behind Closed Eyes" Marshall fires the rhythmic engine with Zayas and Marsella into a dynamic matrix of sound.

Meanwhile, Lawrence leads the horns- Mike Cemprola (alto sax) and Mark Allen (baritone sax), Brent White (trombone) and all a four players at various times in fiery exchanges, their combined chemistry one of the defining qualities of this orchestra.
In the second half of the concert guitarist Tim Conley (originally from the West Coast) commands on electric bass, when he isn't unleashing sonic effects on his laptop, which has been dubbed 'Starship.'

The orchestra was invited to perform at the Sinatra Centennial event at Lincoln Center last year and Lawrence said they performed Sinatra's standard "It Was a Very Good Year" because it embodied Frank's vocal artistry. The opening orchestral lushness gives way to an intimacy (ala Sinatra) but then Frank's voice is heard in a voiceover joking about growing up a skinny kid in his family's 5th floor walkup in Hoboken. Conley then distorts this shtick with Starship effects, and then he blasts off into acid jazz guitar riff worthy of Monterey circa '67. Wonder what Sinatra would have said about this version- bet 'New York, New York' Sinatra would have hated it, but big-band sousy Frank would have loved the ride. Meanwhile, the Bride crowd was enthralled.

Lawrence then announced that the concert closer would be a piece they had recorded the day before call "Life Mosaic" a piece jointly composed by Lawrence, Fraticelli, Marshall and Conley. The work previewed two years ago at the Kimmel Center's jazz residency programming and it sounds like a signature piece already. It is a sprawling, four-movement piece, with each musician weighing in and the full effect closer to a concerto for full jazz orchestra.

A great night of jazz and another auspicious sign that the Philadelphia is doing more than reclaiming its great jazz history, but investing in a jazz renaissance which seems to be in full vanguard swing.