When Philomena Lee, the subject of a recent Oscar-nominated film, was asked if she could have imagined at 18 years of age that she'd one day meet the pope and have a movie made about her life, she responded simply, "No way."

Philomena was 18 years old, pregnant and unmarried in 1952 when her family sent her to an Irish country convent to be "put away" with the nuns. Three years after her son's birth, he was taken away to be sold for adoption in the United States by the nuns running the convent. Philomena was forced to sign a renunciation agreement stating she would never attempt to reunite with her child.

Now almost 60 years and one Oscar-nominated film later, Philomena traveled to the Vatican on Wednesday to attend mass in St. Peter's Square and meet with Pope Francis. 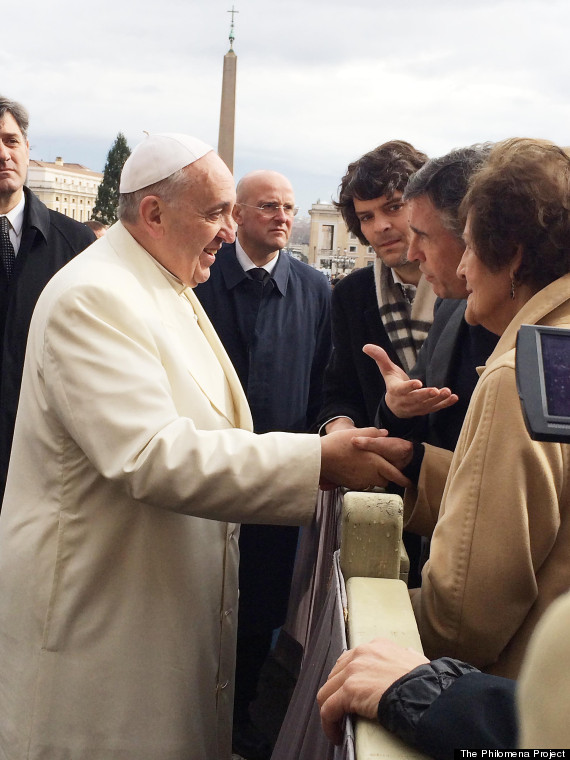 After all she has been through, Philomena remains firm in her Catholic faith, despite some critics' claims that the film is anti-Catholic.

"I have always put great faith in the Church and the good will to put the wrongs of the past right. I hope and believe that his Holiness Pope Francis joins me in the fight to help the thousands of mothers and children who need closure on their own stories."

Philomena's story came to light in 2004 when she finally revealed her secret to her family. Soon after, journalist Martin Sixsmith got on the case to help her locate the child, who would have now been a grown man.

Lee traveled to the Vatican with her daughter, Jane Libbteron, and Philomena filmmaker Steve Coogan, together representing The Philomena Project, which is petitioning the Irish government to open adoption records and help reunite mothers and children separated by forced adoption.