Imagine if you had been assigned the unpleasant duty of having to execute someone you believed was innocent. Then imagine that, just before you and your regiment of soldiers are about to shoot this condemned person, you confess your feelings to the prisoner that you don't want to carry out your task. He says to you: "Follow your instructions, and if your intention be sincere, the Almighty is surely able to relieve you from your perplexity." The prisoner is suspended to a wall together with another of his friends. With a crowd of about 10,000 people watching, you and 750 soldiers fire your rifles at the prisoners, and a huge cloud of smoke darkens the scene. When the smoke finally clears, everyone sees that the bullets have shattered the ropes holding the prisoners in place, one of them is alive, and the other has vanished from the scene. What would you do?

This is exactly the dilemma that faced Sam Khan, an army commander, in Tabriz, Persia on July 9, 1850. His response, and that of his entire regiment, was to immediately quit their jobs. The prisoner that Sam Khan had confessed his reluctance to execute was Siyyid Ali Muhammad, also known as "The Bab" or "The Gate," who had been condemned to die because he claimed to have brought a new message from the Creator to humanity. He was one of two Founders of the Baha'i Faith. 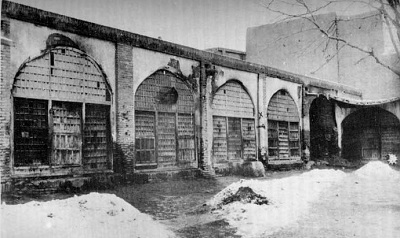 The barrack wall in Tabriz where the Bab was suspended to be shot.
The pillar on the right with an x shows where he was tied.

Just before the Bab was taken from his prison cell to be executed, he was in the middle of a conversation with his secretary. The head attendant of the prison came to escort him to be executed, interrupting the conversation. As he was being taken out, the Bab said to the prison official: "Not until I have said to him (the secretary) all those things that I wish to say, can any earthly power silence me." After the shots were fired and the ropes cut, he was eventually found back in the same prison cell calmly continuing the conversation with his secretary. He said to the same prison official who located him back in the cell: "I have finished my conversation. You may now proceed to fulfill your intention." Like Sam Khan, the official was so shaken that he immediately resigned his post.

An entirely new commander and regiment of soldiers was found and asked to try the execution again. Despite the events of the past hour or so, this commander had none of the same reservations as Sam Khan. This time, after the smoke cleared, it was clear that the bullets hit their target and the bodies of both prisoners had been melded into a single pile of flesh, with their faces intact. After this, a gale of exceptional severity swept over the city of Tabriz, and a whirlwind of dust obscured the light of the sun from noon until dusk. The bodies were dumped by the edge of a moat on the outskirts of the city, and were retrieved in the middle of the second night after the execution by some bereaved followers of the Bab despite armed guards having been assigned to watch the remains.

The bodies were hidden and transferred from place to place, until they were finally interred many years later in what is now Haifa, Israel. The contrast is striking: the remains that were harshly dumped by the edge of a moat outside of what is now Tabriz, Iran, became the center of a beautiful Shrine in Haifa, Israel, that is a world heritage site and a recognized symbol of the beauty that is the Holy Land. 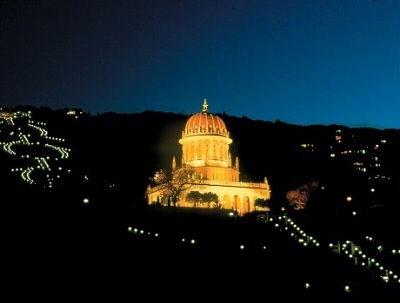 The Shrine of the Bab in Haifa, Israel

The second regiment of soldiers that carried out the execution were themselves soon all killed -- some because a wall collapsed on them during an earthquake, and the rest executed by firing squad for mutiny. The teachings of the Bab quickly spread around the world, and the dramatic circumstances of his death inspired many. For example, a Russian poet wrote a drama which was published in the major cities of Europe early in the 20th century and influenced Leo Tolstoy to become more familiar with the Bab's teachings. Another recent example is Grant Hindin Miller, a musician in New Zealand, who has written a beautiful song from the perspective of the mud on the bricks of the city of Tabriz, "dumb with despair" at the tragic event that stained the name of the city forever.

On July 9 this year, some 5 million members of the Baha'i community around the world will commemorate the Bab's last earthly moments with programs of prayers and readings. Anyone wishing to learn more about these dramatic events or the teachings of the Bab is most welcome to attend by contacting the Baha'is in your area.

Check out Baha'i gardens from around the world...