You don't need a degree in astrophysics and lots of fancy equipment to detect cosmic rays, those invisible subatomic particles that zoom through space and crash into Earth.

All you need is some duct tape and a couple of free apps, and you can turn your smart phone into a pocket cosmic ray detector.

“It would be great to get students and the public interested in gathering data and understanding the particles around them, things they ordinarily don’t get a chance to see,” the creator of one of the apps, University of Wisconsin physicist Dr. Justin Vanderbroucke, said in a written statement.

Scientists themselves have a fuzzy understanding of cosmic rays, which they believe are high-energy subatomic particles emitted by black holes and supernovas, according to Live Science. By studying the elusive particles, scientists hope to discover more about dark matter -- and you can help!

You'll need the apps data logger and DECO, which can be downloaded here. Currently, the apps are available only for Android devices, but Vanderbroucke's team has an iOS app in the works.

Place the phone anywhere with its screen face up.

Voila! The app actually works by detecting muons, secondary particles that are created when cosmic rays hit the Earth's atmosphere. When a muon hits the silicon underneath the phone's camera, it triggers an electric charge, which creates a pixel "signature." DECO takes an image every couple of seconds, determines whether the image has pixel signatures, and transmits the information to a central database. 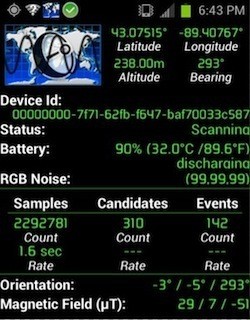 A screen capture of the DECO app in action displays data, including the number of cosmic events recorded.