It was, at once, the most unanticipated and head-scratching moment during Tuesday's presidential debate at Drexel University. Rep. Dennis Kucinich, D-OH, was pestered by moderator Tim Russert regarding the congressman's claimed sighting of a UFO while staying with writer Shirley MacLaine. Kucinich stood by the previous account (watch video), asking Russert to repeat the fact that 14 percent of Americans claim to have seen a UFO at some point in their life.

One might think that the Ohioan's candidness earned him the endorsement of the community of extraterrestrial believers. But not so fast. 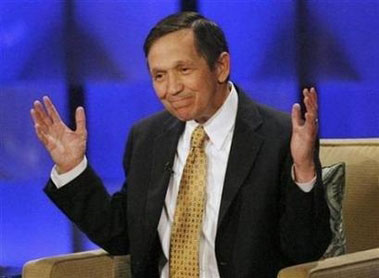 According to Stephen Bassett, Executive Director of the Paradigm Research Group and chief lobbyist of the Extraterrestrial Phenomena Political Action Committee, Kucinich isn't even the preferred Democratic vice presidential candidate. That honor goes to Gov. Bill Richardson of New Mexico. As for Bassett's choice for president, Sen. Hillary Clinton inhabits the mothership.

"Hillary has a connection there because there is no way she and John Podesta [Bill Clinton's former chief of staff, who has advocated declassifying relevant government records] weren't fully aware of it. She knows this issue is not trivial," said Bassett. "Of the 20 candidates the two who have clearly identifiable connections to the issue are those two [Clinton and Richardson]. Kucinich is number three."

For extraterrestrial enthusiasts, the issue of prime importance is ending the UFO truth embargo, something Bassett believes the next Democratic president will do "so that the cover up doesn't become their cover up." He acknowledges that his organization's political support doesn't translate into campaign donations, or, for that matter, many earth-bound votes. And he laments the fact that Republicans - with Sen. McCain, R-AZ, being the possible exception - aren't more "out there" on "exopolitics." Mostly, however, he has little patience for the theory that a candidate who addresses Martian-themed issues will lose any and all political credibility.

"I don't care if they can or can't win. I'm sick and tired of candidates who say I can't talk about this or that because I want to be president. That's bull****," said Bassett. "They want to lead the free world, but they can't talk about an issue of that implication?"