Dave Hakkens thinks the way people currently buy electronics is inherently wasteful. As soon as a new device comes out, the old one is tossed in the garbage or put on the shelf to collect dust. But the Dutch designer wants to change that with a Lego-like device in which parts of the phone, not the entire device, can be replaced.

"Every time I got a new phone I threw away so many good components, all those bluetooths, speakers, displays I've thrown out over the years just because one other component is broken," Hakkens told the Huffington Post by email. "This felt like a real waste!"

So this week, Hakkens introduced his design for Phonebloks, a smartphone that has detachable components on its front and back so that everything from the processor to the camera can be easily upgraded without discarding the rest of the phone. The entire contraption is held together by a pegboard-style base, with a screen -- also replaceable -- mounted on the front. 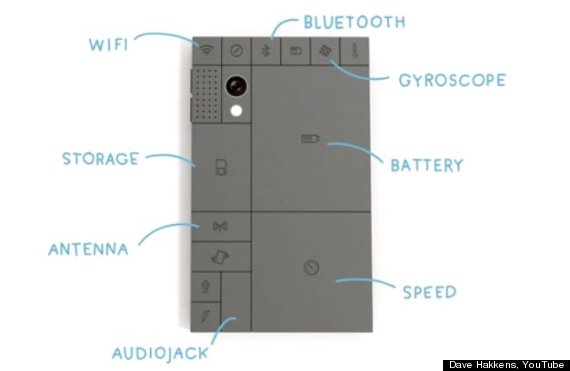 The backside of Hakkens' proposed phone.

There would be one block for the camera lens, one for the battery, one for storage and so on. Those blocks would plug into the base, and the blocks, base and screen would be secured together with two screws. Because individual blocks can be replaced when they become outdated or simply break, Hakkens thinks electronic waste can be drastically reduced with such a phone.

"I wanted to have a phone where I could keep the good parts and replace the bad ones," Hakkens told HuffPost. "Although the world of mobile phones is insanely complex I wanted to see if I could bring any help."

As Hakkens explains in his video outlining the device (below), the phone can be customized to your personal preferences. If you take a lot of pictures, pop in high-resolution camera. If you need a lot of storage for music, get a larger storage block. The hardware would be built on an open platform, so anyone can create their own blocks.

The idea has gotten a lot of coverage and online support since the video was put on YouTube on Tuesday, and Hakkens is a bit surprised by the reaction. "I figured it would get some exposure, but this is just stunning," he said. "So many wonderful mails, reaction and tweets!"

For now, Phoneblocks is just an idea, but Hakkens hopes the product can come to fruition. Using a service called Thunderclap, he is coordinating would-be Phonebloks enthusiasts to send out a message about the phone on Facebook, Twitter, and Tumblr on the same day, Oct. 29.

"Usually companies launch a product and consumers can buy it," Hakkens says. "I wanted to see if I could do it the other way around."

As of Wednesday, more than 81,000 people have signed up to send out this message. Hakkens will likely meet his goal of 100,000 people soon.

Watch the video for Phonebloks below: