New Orleans is struggling to preserve its heritage. It faces the existential threat of hurricanes and storms wrought by climate change, the continuing struggle to rebuild after Katrina even as developers seek to build high rises in historic neighborhoods, and the social tensions occasioned by poverty and racial and ethnic prejudice.

Whatever the future holds, however, New Orleans' heritage will not be forgotten thanks in large part to photographer Harold Baquet. No one better captured the city's unique character, recorded its history, and profiled its people in the last quarter of the 20th Century and the first decade of the 21st. If one picture is proverbially worth a thousand words, Harold's were worth at least ten thousand.

Harold was almost never without his camera. He made the ordinary extraordinary by producing pictures of African-American life in New Orleans, which told stories. One understood the trials of daily life as well as the challenges of the all-too-frequent tragedies that confronted New Orleanians. Looking at his photos one could hear the music or soak in the culture. The viewer could feel the pain or experience the joy of those in his pictures. He photographed the powerful and the ordinary.

Harold's artistry in his pictures is stunning, whether breaking news photos, portraits, commercial projects or a momentary occurrence. Promotional material containing photos by Harold's immediately drew the viewer into the subject. They were works of art as much as they were informative. One look at Harold's book lined office at Loyola University helped explain his gift. His library reflected his extensive and eclectic intellectual interests and passionately held beliefs. His photos of events and places and the people experiencing those events and occupying those spaces were informed by both his intellect and his passion.

Depending upon the subject, Harold infused his pictures with meaning or whimsy, sometimes both at the same time. I can't think of anyone else who would have conceived of setting high school graduation pictures of a tennis player in a bathtub filled with tennis balls. In one photo the soon-to-be collegian was luxuriating; in the next he was drowning.

Harold's untimely death a year ago this week robbed New Orleans of his energy and continuing creativity, but he has left behind an historical treasure that will now be appropriately housed in The Historic New Orleans Collection. Importantly, it is that institution's first photographic collection by a black photographer. The Harold F. Baquet archive contains thousands of images by this special seventh-generation New Orleanian and activist with deep community roots. They preserve memories of life in the destroyed public housing projects, of the vibrant Vietnamese refugee neighborhood, of the political administration of the City's first black Mayor, and of the City's numerous celebrations, including Mardi Gras, Jazz Fest, Black Heritage Festival, to name but a few.

Harold provided me my most important possession: the pictures of my son as he grew up. These were the first possessions I sought to save as Katrina threatened the city. Now, thanks to Cheron Brylski, Harold's widow, New Orleanians can at least preserve the memories of their unique city. We can also continue to draw inspiration from Harold Baquet's life and work. 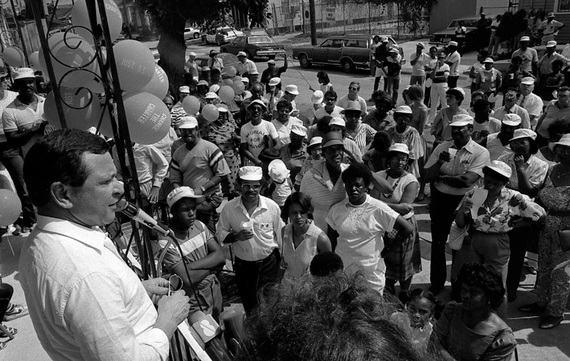