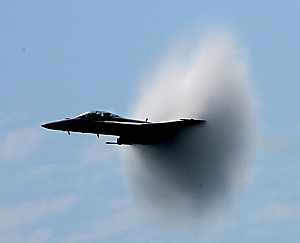 The F-22 Raptor breaking the sound barrier is one of the thrilling sights at the Memorial Day Air Show at Jones Beach, Long Island (© 2011 Karen Rubin/news-photos-features.com).

More than 300,000 people will be at Jones Beach, Long Island, over Memorial Day weekend to see one of the most thrilling and eagerly awaited events: the 8th Annual Bethpage Federal Credit Union Air Show (May 28 & 29, 10 a.m.-3 pm.). And hundreds of thousands of them will be pointing cameras trying to catch planes traveling hundreds of miles an hour, mid-air, doing their daring maneuvers. 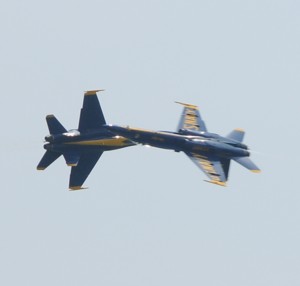 How do you capture the optimum moment when it's over in just a fraction of a second?

Here is the most important tip: bring a digital SLR, adjust the ISO so that you can set the camera for shutter-speed priority of 1/500th or faster, and begin shooting even before the planes are at the point you want to catch them (like one of the maneuvers where two fighter jets seem on a collision path). Bring a telephoto of at least 200 mm (I prefer a zoom lens to give me more flexibility). Instead of a tripod, find a railing to support your elbow to cradle the camera - then you can better follow the aircraft. Point where you want to take the photo, rather than follow the planes with the camera. With one eye in the viewfinder, follow the action with your other eye (easier to do than it sounds). 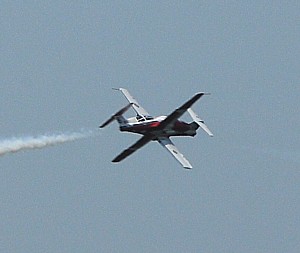 Use an SLR camera to catch the action at the Jones Beach Memorial Day Airshow, like these two planes that seem to be entangled (© 2011 Karen Rubin/news-photos-features.com).

One of the best parts of the Jones Beach Air Show is how close the action is to where you are on the beach, and there are usually multiple passes which means more opportunities to shoot.

"Each year, hundreds of thousands of spectators convene on Long Island to view the annual Bethpage Federal Credit Union Air Show at Jones Beach headlined by some of the most elite pilots in the world. This year, we are especially excited to be participating in the Centennial of Naval Aviation -- a true milestone for our country," said Linda Armyn, Senior Vice President, Corporate Development and Government Affairs, Bethpage Federal Credit Union, the major sponsor. "To honor this historic celebration, together with the New York State Office of Parks, Recreation and Historic Preservation, we have lined up some of the world's best military and civilian air performers."

The Air Combat Command F-22A Demonstration Team will have you holding your breath: the team performs precision aerial maneuvers to demonstrate the unique capabilities of the world's only operational fifth-generation fighter aircraft. Team members also exhibit the professional qualities the Air Force develops in the people who fly, maintain and support these aircraft. The F-22A Raptor is the Air Force's newest fighter aircraft. Its combination of stealth, supercruise, maneuverability, and integrated avionics, coupled with improved supportability, represents an exponential leap in war-fighting capabilities.

The A-10 Thunderbolt II will once again grace the skies over the Atlantic Ocean at the Bethpage Federal Credit Union Air Show at Jones Beach.

US Army Golden Knights make a dramatic entrance, parachuting onto the beach with graet flare The two competition teams travel, competing nationally and internationally at various skydiving competitions. They are the most successful U.S. Department of Defense sports team. 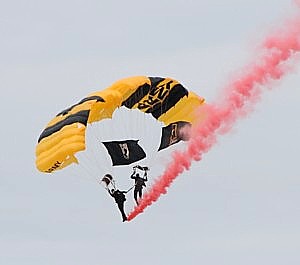 The Air Show will be held Memorial Day weekend 2011 at Jones Beach State Park, Wantagh, on Saturday, May 28 10 am - 3 pm and Sunday, May 29, 10 am - 3 pm. Traffic builds up (last year, there were 127,000 people on Saturday and 230,000 on Sunday), so get there by 9 am. Bring beach towels or chairs (for the boardwalk), wear beach attire but bring windbreakers and sweatshirts for when it gets cool, hats, sunglasses, sunscreen, water and snacks. Bring your camera - preferably an SLR with telephoto lens, in order to capture the extreme speed and dramatic action. Check the website regularly for last minute news items and updates, and check the weather.

The Air Show is free to the public, but the standard $10 vehicle use fee is collected each day upon entry to the State Park. (Consider taking this opportunity to buy the Empire Passport, at $65, which gives unlimited vehicle access to most facilities operated by the New York State Office of Parks, Recreation and Historic Preservation and the New York State Department of Environmental Conservation, throughout the state, though March 31, 2012.)

For additions to the lineup and up-to-date information about this year's show, visit www.jonesbeachairshow.com. Fans will also be able to participate in contests and promotions, as well as share their experiences with this historical Long Island event by visiting www.facebook.com/jonesbeachairshow.

For more information about the Air Show, contact the New York State Office of Parks, Recreation and Historic Preservation, Regional Office, Recreation Department at 631/321-3510 or visit Bethpage at www.lovebethpage.com.

Karen Rubin is an eclectic travel writer who has been spanning the globe for more than 30 years to discover the best ways to explore places and experience cultures and destinations.