Gail Quagliata's original objective in 2009 was to find the best bodega coffee in town, and it soon took on a life of its own. Every Bodega in Manhattan is a massive undertaking, meticulously documented every step of the way via a Google Map created by Quagliata as well as on her tumblr. She currently has just a chunk of Harlem left to do along with a few do-overs on her original list, and 12,000 images to cull through of over 4,000 Manhattan bodegas. Her images capture a slice of life that is, more's the pity, fast disappearing from the emerging sanitized chain-store landscape of New Manhattan. 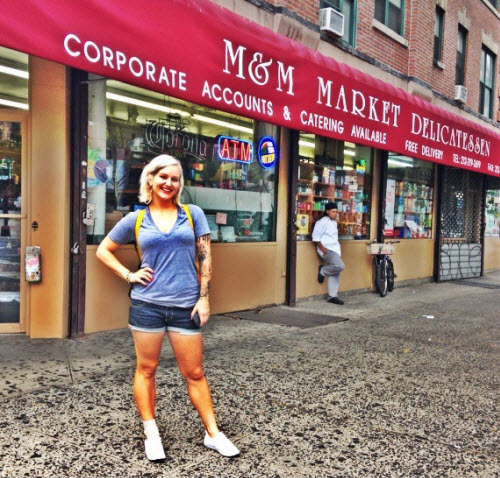 When Gail first moved to the city from Omaha ten years ago, she remembers there being a total of three 7-11's in town; now they and other chains appear to be snapping up mom-pop bodegas left and right as small business owners are being replaced by bland corporate stores with no connection to the local community. Jose Fernandez, president of the Bodega Federation of the USA, told the Wall Street Journal this week that the number of New York stores has declined 20% in the past year alone. "I am desperate to collect these sites before their owners are driven out of business for services the bodega already meets by actually knowing its clientele and the neighborhood," says Quagliata on her website.

What, exactly, is a bodega? The word means "wine store" in Spanish and according to citydictionary.com, "In New York City, any small neighborhood grocery/convenience store or corner store is referred to as a 'bodega.' "People will fight you to the death on the definition of a bodega," says Quagliata. Her biggest pushback has been from those who insist that a bodega is always Latino-owned and catering to the Latino community. She goes for the wider definition, especially in a city that has long been a haven for immigrants of all nations who came to the island to make a better life for themselves and their families.

"I want to make it clear that I'm not saying change is always bad, but I am saying New York will cease to be New York if we price out every bit of individuality," Quagliata stated to me over lunch in Soho, one of the more rapidly-changing neighborscapes of our city. She's "amazed and touched" at the incredible response her project has received, providing a multiplatform touchstone on several levels. For uniformity's sake, she has used one camera throughout her journey: a Nikon D800E with a 50mm lens; she shoots only during the day "to allow a blank canvas on which the stores themselves are paramount - not the weather, the dramatic lighting of sunset, or the changing seasons"; she does her best to avoid having any human subjects in the frame, preferring to make a portrait of the store itself.

At this point, she's gone through two pairs of boots, had one foot injury, and doggedly continues her progress to finish the project with days that can go 6-7 hours in length. "Once I started I realized I had to do this," says Quagliata. "I couldn't stop." Each store must contain her "holy trinity" to qualify as an actual bodega: lotto tickets, beer, cigarettes as well as a deli counter. She was once misidentified as a cop while she was casing a store and waiting for the entrance to clear of people so she could photograph it. "It's a microcosm of the city - open all the time - and it has everything you need." 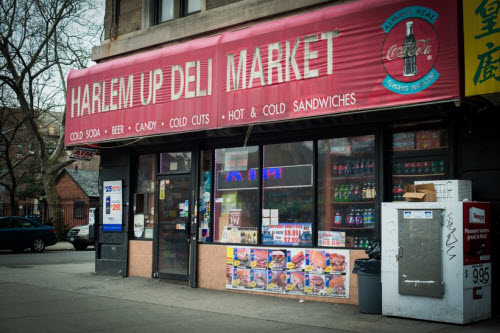 There are eight million stories in the Naked City, goes the iconic narration for a 1948 Jules Dassin film noir. Thanks to Every Bodega in Manhattan, we will be able to glimpse many thousands of them via Gail's camera lens. She's not yet sure what final form the project will take - book, exhibition, film or all three and more - but she's open to anything, and genuinely thrilled at the interest the project has received thus far. Also, Gods of Industry and Commerce? In case you want to fund something that actually means something to people, Gail has a ton of other ideas for projects, "SO MANY IDEAS."